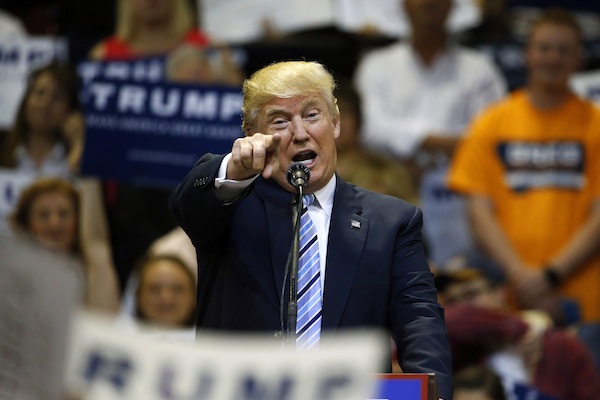 TAMPA, Fla. (AP) — Donald Trump calls his presidential campaign a mass movement, but he must show he can coax enough support from voters who twice delivered the White House to Barack Obama.

The billionaire businessman depended almost exclusively on conservative and GOP-leaning whites — a majority of them men — to secure the Republican nomination. Now he must look ahead to a wider, more diverse voting population in his likely general election matchup with Democratic front-runner Hillary Clinton.

His ability to seize on marginal shifts in the electorate may determine whether he can pull off a victory once unthinkable. Trump's task is critical to flipping back into the GOP column some of the most contested states that Obama won twice.

This challenge is perhaps best evident in Florida, a culturally, racially and ideologically varied state where Obama defeated Republican Mitt Romney four years ago by fewer than 75,000 votes out of more than 8.4 million cast.

That means small shifts anywhere in the electorate could make a difference — from turnout changes among white small-town and rural Republicans or urban, nonwhite Democrats to partisans, embittered by contentious nominating bouts, choosing third-party candidates or declining to vote at all; and if Trump can't close the gaps in Florida, he has little shot of winning key Rust Belt and Great Lakes states where Obama's advantages were greater.

"We still elect presidents using the Electoral College ... depending on states that are made up of diverse electorates," cautions GOP pollster Whit Ayres. "There aren't enough angry white people to create a majority in the new America of 2016, (and) running up your numbers with white males in Mississippi doesn't get you one more electoral vote than Mitt Romney."

One of Trump's vanquished primary rivals, Sen. Marco Rubio, told reporters this week Trump can win Florida, which has gone with the winner in every presidential contest since 1996, as long as he can "continue to be Donald."

Oliver cites Trump's hard line on immigration and calls him a leader "who will finally give a damn about people like me." Papa, a New Jersey native, says Trump "speaks my language, talks and thinks like me."

But Trump must expand his reach.

"If he can't unify Republicans, there really isn't enough votes for him to make up elsewhere," said Steve Schale, who ran Obama's 2008 campaign in Florida. He said Florida elections have been close for decades, noting 41 million combined presidential votes have been cast since 1992, with fewer than 131,000 votes separating the combined totals of Democratic and Republican nominees.

Trump gives lip service to the electorate's diversity, suggesting "the Mexican people" will "vote for me like crazy" and that he can win 25 percent of African-Americans. The highest won by any GOP nominee since 1980 is about 12 percent. He said recently he could lure "40 percent" of voters backing Clinton's primary opponent, Bernie Sanders.

Some nonwhite Floridians mock Trump's claims about his own appeal.

"I haven't heard any of my (black) friends say they'll vote for Trump," said Tanisha Winns, 39, a black Democrat in Lakeland, located along central Florida's Interstate 4 corridor that twice helped give Republican George W. Bush the statewide victory before swinging in Obama's favor. "If anything, I'm hearing my white friends say they won't," Winns added.

For now, Florida polls suggest Trump and Clinton are running about even, with about 15 percent undecided. But there are variables that should give Trump pause.

In 2012, nonwhites accounted for almost a third of all votes cast in Florida, compared to 28 percent nationwide. But population growth, driven by Hispanics, suggests both numbers could be higher come November.

Obama beat Romney with Florida's black vote with 95 percent. The president won Hispanics by a 60-40 margin, closer than his 71-27 advantage nationally, with many of Florida's conservative Cuban-American voters accounting for the difference.

Those numbers still left Romney too reliant on whites. He managed 61 percent of Florida's white vote — better than his 59 percent nationally — but he needed to get closer to 63 percent to win the Sunshine State's 29 electoral votes.

Demographers and pollsters from both parties say Trump likely would have to push into the mid- to high-60s with whites — a level no candidate has reached since Ronald Reagan's 1984 landslide — to have a chance nationally. That's even more daunting considering an AP-GfK poll, taken in April, that found two out of three white women view Trump negatively.

Among them are Republicans the nominee absolutely must get.

In Clearwater, Republican Barbie Sugas says she's always voted for the GOP nominee, but the 47-year-old surgical technician said she's "kind of leaning toward Clinton" because she doesn't "trust Trump" with international affairs.

To be sure, Clinton also must shore up her Democratic base, still divided with Sanders in the race. Jennifer Perelman, a Sanders supporter, says she won't back the former secretary of state. But she won't vote for Trump either. Her plan: to vote for Sanders as a write-in candidate.

Ayres, the Republican pollster, affirmed that it's "not impossible" for Trump to fashion a winning coalition. But, he says, "You're basically arguing that somehow, a constant 20-year-plus demographic trend is just going to magically stop."