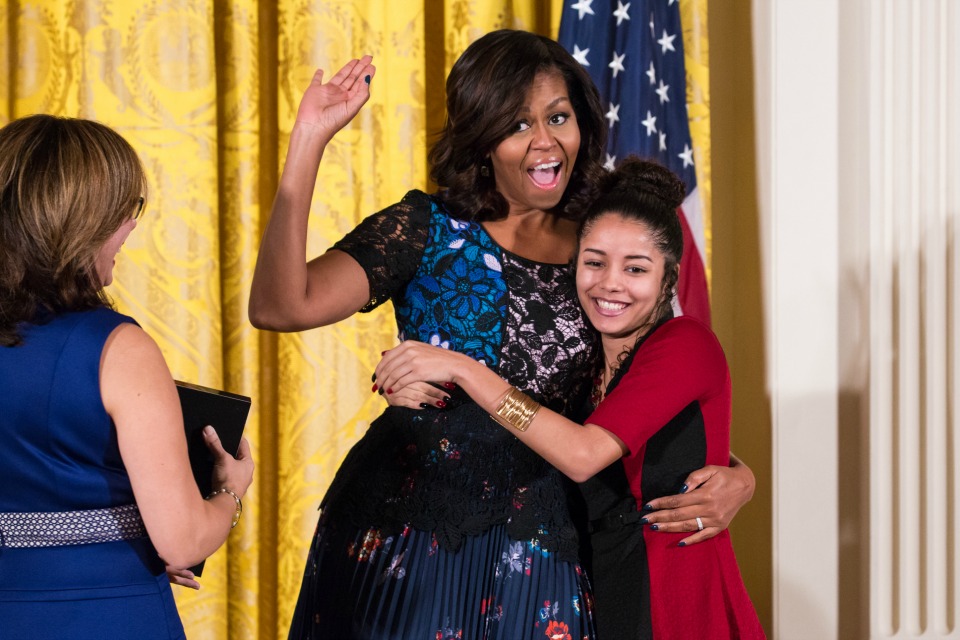 WASHINGTON -- Children from all over the nation, some who had never ventured past their street corners and others who had never traveled outside their cities, stood in the White House and cried, the tears streaming down their face.

They also laughed and giggled and hugged.

They were a diverse group, black, Hispanic, Native American and gay, ages 12 to 18, They had traveled to Washington from as far away as Arkansas and San Francisco to receive awards for their special arts organizations.

They also got a chance to say goodbye to the first lady, Michelle Obama, a woman who they said made them feel like they too are a part of American.

“I’m more than happy,” said Noemi Negron after giving Obama a huge hug and mugging for the cameras. “As a woman of color, it just makes me so happy to see Michelle up there fighting for everybody’s rights. She thinks everyone should be equal and that’s how it should be and. I think she’s so amazing.”

The children and the programs their programs were there to receive awards from the National Arts and Humanities Youth Program, which uses the arts to address the needs of youth with special needs.

Aquino, for example, is with Subway Sleuths, a New York City program for autistic children. Negron is part of Inquilinos Boricuas En Accion’s Youth Development Program in Boston, which helps low-income youth prepare them for college and careers.

The program included speeches, including one from Cuban Ambassador Jose Ramon Cabanas Rodriguez, and music.

A string quartet of young men smartly dressed in black performed as part of the event. They represented the Sphinx Overture, a program that provides free music education, violin lessons and instruments to students in underserved communities in Flint, Mich. 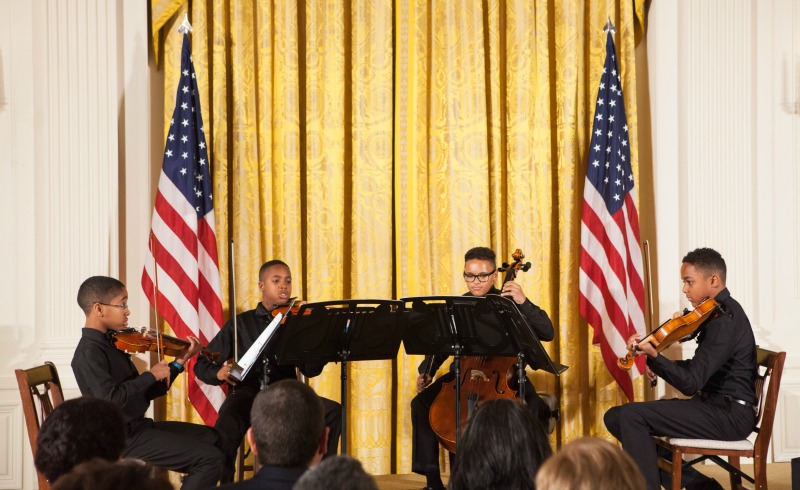 Youth from the Sphinx Organization in Flint, Mich., perform for awards ceremony in the East Room of the White House. Photo by Cheriss May, HUNS.

Traeshayona Weekes told the audience that she “had been waiting to wrap her arms around Mrs. Obama all day.” Weekes is with True Colors: OUT Youth Theater, a Boston theater group for lesbian, gay, transgender and bi-sexual children.

It was not only children who were excited.

“Oh my God, it’s like an explosion in my heart,” said Lizt Alfonso, who was honored as founder of the Lizt Alfonso Dance Cuba School in Chicago. “It’s such a delight. I was a little nervous because -- you see between two countries you have a lot of differences, but no, we’re the same. We’re at the same point, with the same things and it feels so good to me.”

Obama embraced, thanked and took photos with each child. The presentation was one of her last official duties as first lady.

“So many lasts we’re having, but this one was the best yet,” she said. “I am proud of you guys. You make this job worth doing, but if we don’t invest in our youth as a nation, we lose.”

Obama said the tenor of the day’s program reflected an effort on her part to make the White House inclusive.

“We made it a priority to open up this house for as many young people, because we wanted them to understand that this is their house too,” she said.

“There are kids all over this country and the world that think that places like this aren’t for them, so they’re intimidated by it. We worked to change that. They should always feel at home within these walls and so many important institutions all over the world.”

“These kids represent the very best of America. We’re a country that believes in our young people -- all of them. We believe that every single child has boundless promise, no matter who they are, where they’ve come from or how much money their parents have.

We believe that each of these young people is a vital part of the great American story. It is important to our continued greatness to see these kids as ours, not as them, not as other, but as ours. So, don’t ever feel fear, because you belong here.”

The programs awarded for their work also included: