For Some Girls, First Lady Rivals Beyoncé as a Role Model 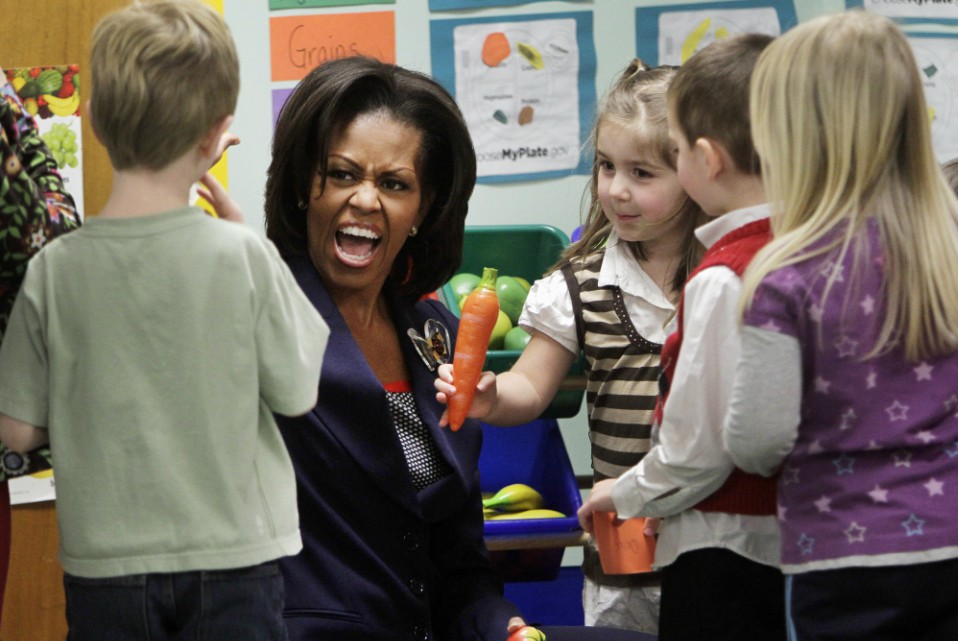 NEW YORK — Healthy food and plenty of exercise. The challenges military families face. Education for girls around the globe.

The feel-good initiatives of first lady Michelle Obama have served as both inspiration and eight years of teaching moments for many families. So what, exactly, do they think is her legacy over a period that spans much of the lifetime of today's kids?

"I think she stands for kindness in America," said Alexis Shenkiryk, a 12-year-old in Del Mar, California. "She really encouraged me to try harder, and she promoted a lot of good things for everyone, not just certain people."

Alexis was jealous when her 24-year-old sister got to attend President Barack Obama's 2008 inauguration. Over the years, said Shenkiryk's mom, Rhonda Moret, the goodwill the first lady was able to pass on to her girls overflowed from the White House.

"We're a biracial family," Moret said. "We've had numerous conversations discussing how one's race or background are truly irrelevant and how we should value one's character above all else."

Inara Abernathy, a 17-year-old in Nashville, Tennessee, has absorbed many life lessons of her own from the first lady.

"She's strong and beautiful and she makes me feel beautiful, too," Inara said. "I feel like I can accomplish things when I think about her."

"I was bullied a lot when I was little and she taught me how when I got bullied to just don't think about it," Inara said. "Ignore them. Live your life and be happy."

Her dad is a retired Army colonel and the teen admires Mrs. Obama's shout-out for military families. And when the first lady put in the White House garden, "it made me think about eating better food and losing weight," Inara said. "Without her I'm not sure I would have done that."

Norfolk, Virginia, 10th-grader Kassidy Carey canvassed for Hillary Clinton and has volunteered to advocate for various social causes through the site DoSomething.org. She was too little to remember the president's first inauguration, but she loved watching the second one. She's a regular first lady watcher.

"Oh, I love her," said Kassidy, who has already decided on law school when the time comes. "I just think she's really well composed, and she's an empowering person.

"I really appreciate that the first lady tries to make young girls feel like more than just girls, you know," she said. "She makes us feel like people who actually have opinions that matter and who can fight for what we believe in."

Kiki Emordi is 8 and in the third grade in Richmond, Texas, outside Houston. Her parents are originally from Nigeria and her mother, Ngozi Emordi, teaches English as a second language.

"She's a bold woman," said the elder Emordi, who also has two older girls and a son. "Any black girl can just see Michelle and know she can dream big. She says to these girls it doesn't matter where you come from or what you look like, you can be anything that you want to be."

Lesson learned, as far as Kiki is concerned. She is forever on the hunt for any news of Mrs. Obama, whether it's about a fresh speech or fabulous outfit.

"I really look up to her as a role model," she said.

At 7, Jordan West of Rochester, New York, has already met her hero, Mrs. Obama, at a White House-hosted event. She helps her two older brothers run the family's Champions of Change, a nonprofit they started to urge young people to become "change agents" in their communities. She recently spoke at another Washington event for girls.

"One of her goals is to help little girls," said Jordan, who was inspired by the first lady to do the same.

Jordan hosted a party for girls in foster care and wrote a book about how she hit on the idea, "Princess for a Day." She also got together with other girls to make real bags for foster kids who would otherwise have to transport their belongings in trash bags.

"She's a black person like us and she's an author and she went to Harvard," Jordan said. "I was so excited."

"For over 10 years now I have taught in underserved communities," Briscoe said. "Michelle is like their Beyonce because she grew up hard like them."

As for Maya? Mrs. Obama, she said, "makes me want to be a better girl."