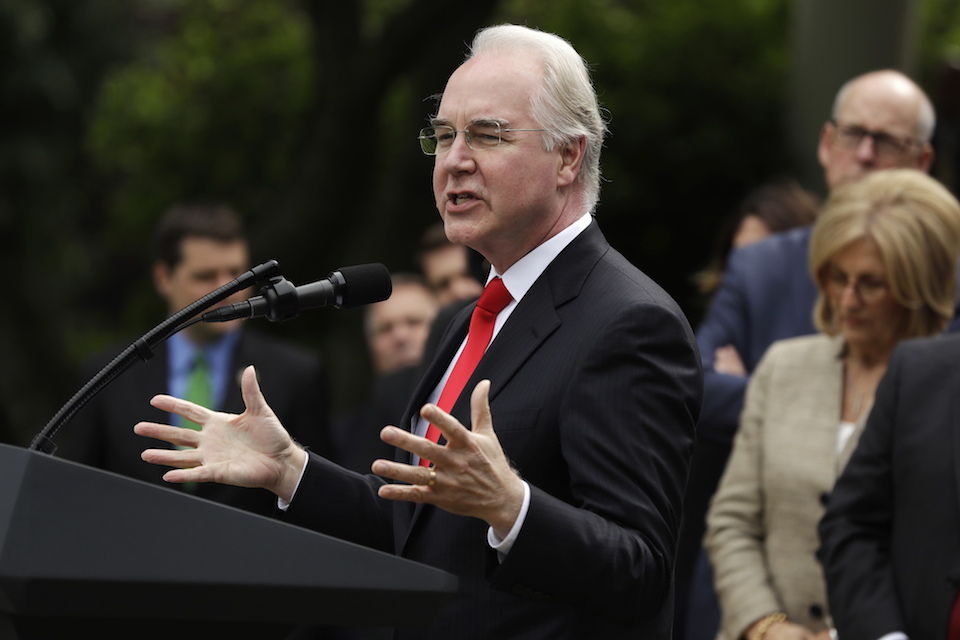 BRANCHBURG, N.J. (AP) — Cutting nearly $1 trillion from Medicaid will give states the freedom to tailor the program to suit their needs, Health and Human Services Secretary Tom Price said Sunday, as he defended a narrowly passed House bill that aims to undo parts of the health care law enacted by the previous administration.

The bill's passage buoyed President Donald Trump, but the measure appeared headed for an overhaul in the Senate.

Mick Mulvaney, Trump's budget director, said the House bill is unlikely to be the version that ultimately clears the Senate and ends up in front of the president.

Republican Sen. Susan Collins of Maine, a moderate Republican whose vote will be critical in getting a bill to Trump's desk, voiced concerns about potential higher costs for older people and those with pre-existing conditions.

She said the House bill was difficult to assess overall because it passed without an updated analysis by the Congressional Budget Office on how the measure would affect health care costs and coverage.

The CBO concluded after reviewing an earlier version of the House bill that an estimated 24 million consumers would lose coverage over 10 years.

Collins said she expected the Senate would come up with a "whole new fresh approach" to replacing the Affordable Care Act, enacted under President Barack Obama.

"The House bill is not going to come before us," she said.

"The Senate is starting from scratch. We're going to draft our bill, and I'm convinced we will take the time to do it right."

CBO's analysis highlighted an $880 billion cut to Medicaid, the federal-state health care program for the poor and disabled, which Price sought to cast as a way to give states more leeway to experiment with the program.

The House bill halts the expansion, in addition to cutting federal spending on the program.

But Price insisted Sunday, "There are no cuts to the Medicaid program," adding that resources were being apportioned "in a way that allows states greater flexibility."

Price said the changes will make sure that people who rely on Medicaid get the care and coverage they need.

The House bill, passed 217-213, would end the health care law's fines on people who don't buy policies and erase its taxes on health industry businesses and higher-earning people.

The measure would also water down the subsidies that help consumers afford health insurance.

Major medical and other organizations, including the American Medical Association, oppose the House bill.

Democrats also refuse to back any effort to undo Obama's law, while some Senate Republicans — Rob Portman of Ohio, Shelley Moore Capito of West Virginia, Cory Gardner of Colorado and Lisa Murkowski of Alaska — oppose the Medicaid cuts.

During the presidential campaign, Trump promised not to cut Medicaid and other entitlement programs.

He celebrated the bill's passage with House Republicans in the White House Rose Garden on Thursday, an unusual move following action on a bill by one House of Congress.

On Sunday, he urged Republican senators to not fail the American people.

"Republican Senators will not let the American people down!" Trump tweeted. "ObamaCare premiums and deductibles are way up — it was a lie and it is dead!"

House Speaker Paul Ryan, R-Wis., said he expected the Senate will improve the House bill, which represents the culmination of seven years of promises by Republicans to repeal and replace what's become known as "Obamacare."

Ryan said the House vote was one part of a "multistage process."

"We think we need to do even more support for people who are older," he acknowledged.

"The Senate will complete the job."

Price commented on CNN's "State of the Union.

" Collins and Ryan appeared on ABC's "This Week" and Mulvaney appeared on CBS' "Face the Nation."