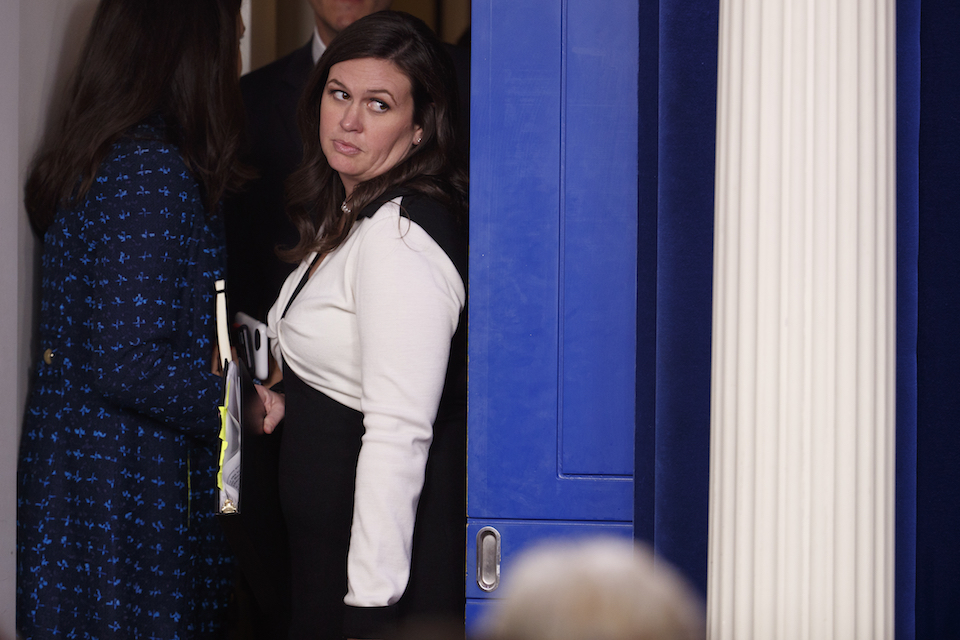 WASHINGTON (AP) — Riding a maelstrom over his firing of the FBI chief, President Donald Trump says the White House people who speak for him cannot be counted on to get facts straight. Nor, it must be said, can he.

What to believe from the fog of contradiction coming from the White House will not be settled any time soon.

Over the past week, Trump spun inaccuracies on trade, taxes and economic theory, with a shoot-from-the-hip style that has become familiar.

Beyond that is a territory of obfuscation involving the ousted FBI director, James Comey, where truths are still to be known and Comey, a central figure in the tumult, is keeping silent.

A sampling of statements by the president and his spokespeople on the FBI, economics and more, during a surreal week:

KELLYANNE CONWAY, White House counselor, on the reason for firing Comey: "This has nothing to do with Russia." — Tuesday on CNN

SARAH HUCKABEE SANDERS, White House spokeswoman, on the investigation into possible collusion between the Trump campaign and the Russian government:

THE FACTS: The initial White House explanation for the firing, that Comey had bungled the FBI's investigation of Hillary Clinton's email practices, persuaded no one. Trump was delighted with Comey's disclosures about the Clinton investigation during the campaign and praised him.

Sanders, though, acknowledged in general terms what was obvious — that by firing Comey, the White House hoped to hasten the conclusion of an aggressive FBI investigation.

WHO INITIATED THE DISMISSAL?

TRUMP, in letter firing the FBI chief Tuesday: "I ... concur with the judgment of the Department of Justice that you are not able to effectively lead the Bureau."

SEAN SPICER, White House spokesman, laying the impetus for the firing on Rosenstein and his memo building the case against Comey:

"It was all him. No one from the White House. That was a DOJ decision." — Tuesday

SANDERS, Wednesday: "People in the Justice Department made a very strong recommendation, the president followed it and he made a quick and decisive action to fire James Comey." — MSNBC interview

TRUMP, Thursday: "Oh, I was going fire regardless of recommendation." — NBC interview

THE FACTS: The early attempts to deflect responsibility on to others were a diversion; Rosenstein had been asked by the White House to put the memo together. Trump's unvarnished assertion that he wanted Comey gone has the ring of truth, even without the whole story known.

He appeared to consider himself his own best spokesman in a tweet Friday that raised the prospect of discontinuing the long White House tradition of daily press briefings.

"As a very active President with lots of things happening, it is not possible for my surrogates to stand at podium with perfect accuracy!" Trump tweeted. "Maybe the best thing to do would be to cancel all future 'press briefings' and hand out written responses for the sake of accuracy???"

TRUMP: "First of all, when you're under investigation you're giving all sorts of documents and everything. I knew I wasn't under and I heard it was stated at the committee, at some committee level, that I wasn't." — NBC interview

THE FACTS: An absence of document requests can't be read as an indication that he isn't under investigation, as Trump suggests. Investigations begin with interviews and document searches that are steps removed from the subject of the probe. Direct contact with the subject wouldn't become known to that person until late in the process.
___

TRUMP's letter to Comey: "I greatly appreciate you informing me, on three separate occasions, that I am not under investigation." In an NBC interview Thursday the president elaborated, saying Comey had told him this at a dinner and in two separate phone calls.

THE FACTS: Comey hasn't responded publicly to Trump's claims. But even if he did make such assurances, those answers months or weeks ago would be ephemeral because the investigation into Russia's meddling in U.S. presidential election continues and hasn't reached conclusions.

That's why investigators make it a practice not to circumscribe a probe in that fashion. It would also breach protocol for an FBI chief and president to discuss an investigation bearing on the president. Acting FBI Director Andrew McCabe told senators Thursday it's not standard practice for the FBI to tell people they're excluded from an investigation.

In congressional testimony March 20, Comey refused to say whether Trump himself was under investigation when asked directly.

He added that he had privately briefed the top Republican and Democrat on the committee "in great detail on the subjects of the investigation and what we're doing."

Publicly, he said, he would not identify those being investigated "so we don't end up smearing people" who may end up not being prosecuted. But he described casting a wide net, "investigating the Russian government's efforts to interfere in the 2016 presidential election and that includes investigating the nature of any links between individuals associated with the Trump campaign and the Russian government and whether there was any coordination between the campaign and Russia's efforts."

TRUMP: "The Electoral College is almost impossible for a Republican to win. Very hard." — NBC interview

THE FACTS: History disagrees. Over the past century, the party victory split is dead even: 13 for Democrats, 13 for Republicans.

If you add the total electoral votes amassed by the candidates of each party over that time, Republicans actually come out ahead — 7,159 to 6,607.

TRUMP: "We're the highest-taxed nation in the world." — interview with The Economist magazine

THE FACTS: Trump has repeatedly made variations on this false claim.

The overall U.S. tax burden is actually one of the lowest among the 32 developed and large emerging-market economies tracked by the Organization for Economic Cooperation and Development.

Trump qualified his claim later in the interview by saying the top marginal corporate tax rate, specifically, is higher than in similar industrialized countries.

That's more or less true, although the higher rate is moderated by tax breaks not available in some of those other countries.
___

TRUMP: "Right now the United States has ... about a $15 billion trade deficit with Canada." — Economist interiew

THE FACTS: His numbers are upside down. The United States actually ran an $8.1 billion trade surplus with Canada last year, according to the latest numbers available from the Census Bureau.

Trump, who regularly decries the loss of American manufacturing jobs, tends to emphasize trade in goods and ignore trade in services.

His comment about Canada came as his administration seeks a renegotiation of the North American Free Trade Agreement with Canada and Mexico.

The U.S. last year ran a deficit of $750 billion in goods with the rest of the world but recorded a $249 billion surplus in services.
___

TRUMP: "You understand the expression 'prime the pump'? ... I came up with it a couple of days ago and I thought it was good. It's what you have to do. We have to prime the pump." — Economist interview

THE FACTS: He didn't coin that phrase. It's a well-worn metaphor for generating faster growth, first made popular as an economic analogy more than 80 years ago during the Great Depression.

The Merriam-Webster dictionary people quickly tweeted that the phrase "priming the pump" has been around since the early 1800s. Literally, it's about pouring water into a pump to allow it to create suction.

The phrase was commonly used by mining publications during the 1920s, but it took on new significance after the economy cratered during the Depression.

By 1933, President Franklin D. Roosevelt had promoted the idea of flushing money into the economy to stimulate stronger growth with his New Deal policies.

Such policies rankled Roosevelt's predecessor, Herbert Hoover. "One of the ideas in these spendings is to prime the economic pump," Hoover said in a 1935 post-presidential speech. "We might abandon this idea also, for it dries up the well of enterprise."
___

TREASURY SECRETARY STEVE MNUCHIN, pitching in: "Right, as soon as the president got elected, they went the other way."

THE FACTS: Trump persists in taking credit for something that happened before he even started running for president. China manipulated its currency, the yuan, lower for years before stopping in mid-2014; Trump's presidential run began a year later.

A weak yuan helps Chinese exports because it makes them cheaper to buy. It disadvantages goods from the U.S. and other countries because they are more expensive to get in China.

Until 2005, China pegged the yuan to the dollar at a specific level. When it loosened the peg, the yuan began to rise steadily against the dollar. Worried that a strong currency would hurt their exporters, Chinese officials bought dollars to prevent the yuan from rising even faster.

The value of the yuan peaked in early 2014, as the Chinese economy slowed after years of torrid growth. The yuan then began to fall relative to the dollar, but not because Chinese officials were once again intervening to push it down. China was actually doing the opposite: selling dollars and buying yuan to prevent its currency from going into a free fall.

TRUMP tweets, concerning his May 5-7 weekend: "Rather than causing a big disruption in N.Y.C., I will be working out of my home in Bedminster, N.J. this weekend. Also saves country money!"

''The reason I am staying in Bedminster, N.J., a beautiful community, is that staying in NYC is much more expensive and disruptive. Meetings!"

THE FACTS: True, less disruption in the New Jersey countryside than in the metropolis and almost certainly less cost to taxpayers.

But his weekends away, whether at his Florida resort or in New Jersey, are much more expensive than weekends at the White House, where security is already in place.

The White House doesn't make it easy for taxpayers to know anything about these costs.

The administration is mum when asked for an accounting, and past attempts by government auditors to gauge the costs of presidential travel are sketchy, fragmentary or outdated.

A law Trump signed provides nearly $120 million to reimburse law enforcement agencies for their costs of protecting his homes outside Washington and to house Secret Service agents in New York and Florida through September.

Bedminster town officials estimate local costs of $12,000 a day for heightened security when Trump stays there.

Palm Beach County, Florida, spends more than $60,000 a day when the president visits, mostly for law enforcement overtime. The New York City Police Department has said it spends up to $146,000 a day to protect first lady Melania Trump and son, Barron, living at Trump Tower until the school year ends.

That cost at least doubles when the president is there.

Those comparisons are inexact but they suggest a Manhattan weekend would be pricier to taxpayers.

Local enforcement is only one segment of costs, though. It costs roughly $200,000 an hour to fly Air Force One, the president's armored limousine is flown separately to his destinations, and the Secret Service faces multiple other expenses associated with his travel.

Trump has spent about half his weekends away since becoming president.