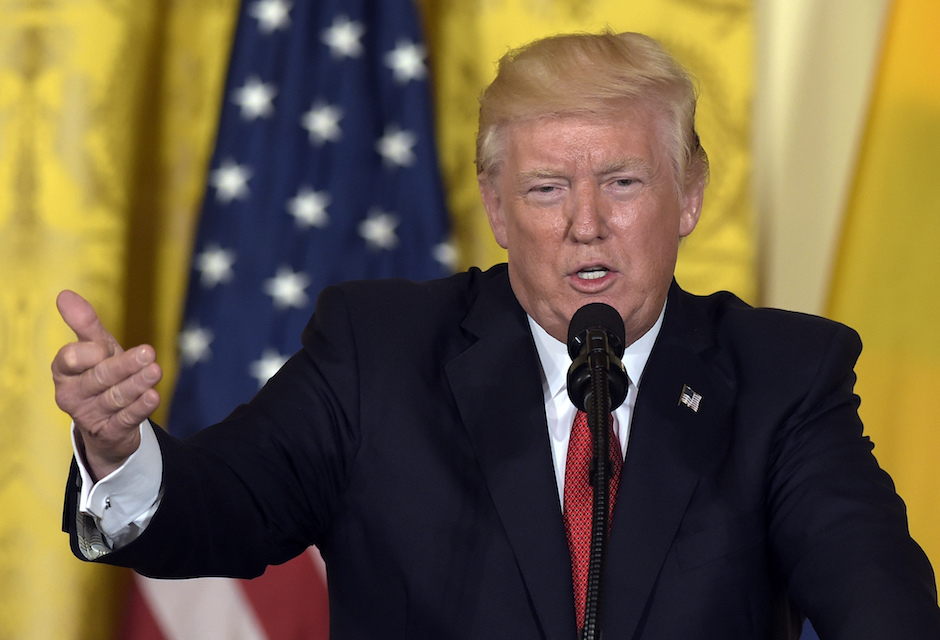 WASHINGTON (AP) — Some things aren't adding up in President Donald Trump's account of the investigation into his campaign's relationship with Russians, an inquiry he says "I respect" yet considers a "witch hunt."

The matter vastly overshadowed anything else said and done by the administration over the past week.

Yet in the nooks and crannies of Trump and his aides statements on jobs, foreign policy and more also call for a second look.

A review from another wild week in Washington:

TRUMP, on his decision to fire FBI Director James Comey:

"I actually thought when I made that decision — and I also got a very, very strong recommendation, as you know, from the deputy attorney general, Rod Rosenstein." — news conference Thursday with his Colombian counterpart, Juan Manuel Santos.

THE FACTS: The recommendation he cites came after Trump decided to fire Comey, according to Rosenstein and to Trump's own previous statement taking sole ownership of the decision.

In an interview with NBC two days after the May 9 Comey dismissal, Trump said he had been planning to fire Comey for months, and linked it with the FBI's Russia investigation.

"In fact when I decided to just do it, I said to myself, I said, 'You know, this Russia thing with Trump and Russia is a made-up story.'"

On Thursday, Rosenstein told senators in a closed-door briefing that he had been informed of Trump's decision to fire Comey before he wrote his memo providing a rationale for that act, said Sen. Dick Durbin, D-Ill.

TRUMP: "Even my enemies have said there is no collusion." — Thursday news conference

THE FACTS: Democrats have not absolved Trump on whether his campaign and Russian officials coordinated efforts last year to disadvantage his Democratic rival, Hillary Clinton.

Several have said they have not seen evidence of collusion, but that's not to say they are satisfied it did not happen.

Trump has cited James Clapper, the director of national intelligence until Trump took office Jan. 20, among others, as being "convinced" there was no collusion.

Clapper said this past week that while a report he issued in January did not uncover collusion, he did not know at the time that the FBI was digging deeply into "potential political collusion between the Trump campaign and the Russians" and he was unaware of what the bureau might have found.

The FBI inquiry continues, as do congressional investigations and, now, one by the special counsel.

TRUMP: "I'm proud to say that under my administration, as you just heard, we will be building the first new heavy icebreakers the United States has seen in over 40 years." — Coast Guard Academy speech Wednesday

THE FACTS: Trump is claiming credit for something that started under his predecessor. President Barack Obama's Homeland Security secretary, Jeh Johnson, spoke about the modernization of the Coast Guard fleet and design work on a new heavy polar ice breaker a year ago in a speech to graduating Coast Guard cadets.

THE FACTS: He's venting and not to be taken literally. Obama's health care law remains in effect and people are using it. As of last count 12.2 million signed up for private health plans through HealthCare.gov and state markets that offer federally subsidized coverage.

Separately another estimated 12 million were made eligible for Medicaid through the law's expansion of that program. It's true that many people who buy their own health insurance are facing another year of big premium increases and shrinking choices.

Trump worked with House Republicans to pass a bill that would roll back much of the health law and the Senate is considering the legislation.

TRUMP, speaking of the MS-13 gang presence in the U.S.:

"A horrible, horrible large group of gangs that have been let into our country over a fairly short period of time. ... They've literally taken over towns and cities of the United States." — Thursday news conference.

THE FACTS: His depiction of the gang as a foreign one "let into" the U.S. is not accurate.

The gang actually began in Los Angeles, according to a fact sheet from Trump's own Justice Department, and "spread quickly across the country."

And it started not recently, but in the 1980s according to that same fact sheet.

The department indirectly credits the Obama administration, in its early years, with helping to rein in the group, largely made up of first-generation Salvadoran-Americans and Salvadoran nationals.

It said: "Through the combined efforts of federal, state and local law enforcement, great progress was made diminishing or severely (disrupting) the gang within certain targeted areas of the U.S. by 2009 and 2010."

The U.S. carried out record deportations during the Obama administration and, on MS-13 specifically, took the unprecedented action of labeling the street gang a transnational criminal organization and announcing a freeze on its U.S. assets.

Such actions were not enough to bring down the group and the Trump administration says it will do more.

TREASURY SECRETARY STEVEN MNUCHIN: "I believe that a goal of 3 percent GDP or higher economic growth is achievable if we make historic reforms to both taxes and regulation." — Senate Banking, Housing and Urban Affairs Committee hearing Thursday

THE FACTS: Several quarters or a year of 3 percent growth may be possible, but few economists expect the changes Mnuchin has proposed would result in sustained growth at that pace.

An economy can only grow as fast as the size and productivity of its workforce. If Trump's policies reduce immigration, the U.S. workforce would grow even more slowly.

Liberal economists argue that corporate profits are already high and any tax cut probably would go to shareholders instead of equipment.

TRUMP on jobs:
—"You look at the tremendous number of jobs that are being announced." — Thursday news conference
— "Jobs are pouring back into our country." — Coast Guard Academy speech
— "I inherited a mess. ... Jobs are pouring out of the country." — February news conference
— "Car companies coming back to U.S. JOBS! JOBS! JOBS!" — on Twitter, after Ford took steps to add about 800 jobs in the U.S. in January and March

THE FACTS: Trump's rhetoric about jobs has changed, but the actual data about hiring haven't. Job gains have been solid since Trump was inaugurated, averaging 185,000 a month from January through April, according to government figures.

As for Ford, context is everything. After hailing the addition of some 800 jobs, Trump was silent after Ford announced Wednesday it plans to cut 1,400 nonfactory jobs in North America and Asia. That will most likely outweigh the jobs added earlier.

Overall, presidents typically get far more credit or blame for the state of the economy than they deserve, economists say. And it is particularly unlikely that any president would have an impact after just four months on the job.

Trump has taken some steps on deregulation but achieved little on taxes, infrastructure or trade to date. But that hasn't stopped Trump from taking credit."

Great jobs report today — it is all beginning to work!" he tweeted May 5, after the government reported that solid hiring in April had pushed the unemployment rate to a 10-year low.

TRUMP: "I won't talk about how much I saved you on the F-35 fighter jet. I won't even talk about it." — Coast Guard Academy speech

THE FACTS: He shouldn't. Trump has repeatedly taken credit for cost savings that began before his presidency on this jet. Pentagon officials took steps before the election to reduce costs on the Lockheed contract and announced savings Dec. 19, a month before Trump was sworn in.
_

THE FACTS: That's a misstatement of U.S. policy and diplomatic history.

The wall is in the Old City, a part of east Jerusalem, which the U.S. and most of the world consider to be occupied territory. So the U.S. position is that the wall is part of Jerusalem, not specifically Israel.

Since Israel's founding, the U.S. has maintained that no state has sovereignty over Jerusalem and its ultimate status must be resolved through Israeli-Palestinian negotiations. That stance has not changed.

In addition to misstating U.S. policy, Haley stepped outside diplomatic norms in asserting a personal view at variance with that policy — that the Western Wall is or should be considered part of Israel.