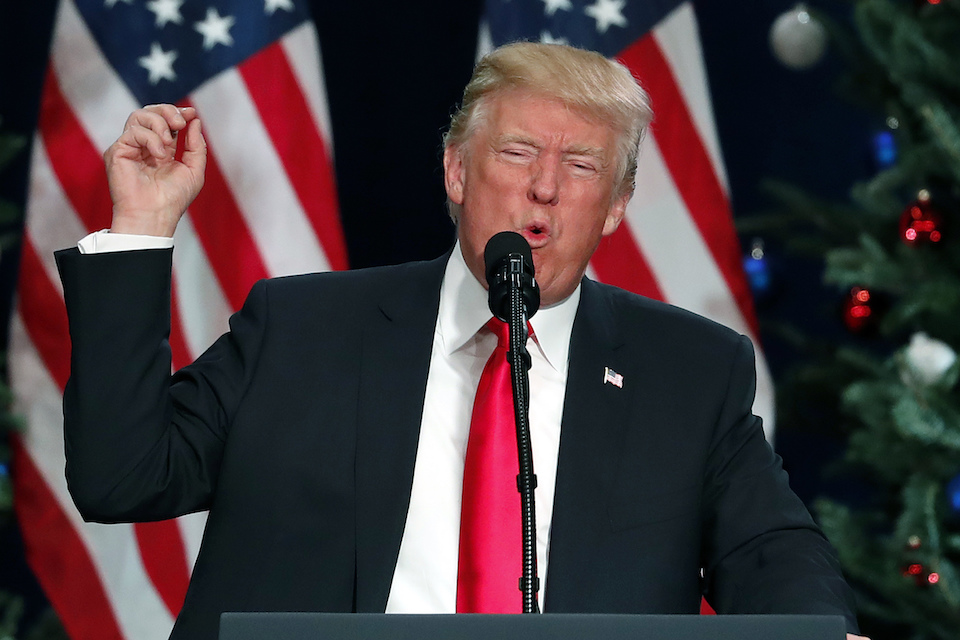 WASHINGTON (AP) — President Donald Trump's rally in Missouri this past week was a set-piece of distortion about taxes and the economy. He compounded his growing legacy of false tales on Twitter, where he spread a British fringe group's factually twisted propaganda aimed at stirring hate and fear of Muslims.

A look at statements from his rally Wednesday, the anti-Muslim propaganda he retweeted and more:

TRUMP describes the tax overhaul as "the biggest tax cut in the history of our country — bigger than Reagan," and says of lawmakers: "For years they have not been able to get tax cuts, many, many years since Reagan."

THE FACTS: Trump is just wrong.

Not only have there been multiple tax cuts since President Ronald Reagan, but Trump's cuts are nowhere near the largest in U.S. history.

An October analysis by the Committee for a Responsible Federal Budget found that it would be the eighth biggest since 1918. As a percentage of the total economy, Reagan's 1981 cut is the biggest followed by the 1945 rollback of taxes that financed World War II. Trump's plan is also lower than cuts in 1948, 1964 and 1921.

TRUMP on quarterly economic growth: "By the way, 3 percent — did you ever think you would hear that in less than a year? And now it comes in at 3.3 percent, which is the largest increase in many years."

THE FACTS: It's close to preposterous to think his wallet would take a hit. Little can be said with certainty because the legislation is in flux, some provisions would expire and he's refused to release his personal tax forms, which would provide a baseline for comparison. But nearly all available details about the House and Senate tax bills show that an extremely wealthy elite — such as the president — would get a cushy bonanza of tax cuts largely unavailable to the middle class.

In just one area, the Senate bill would slash the tax paid by companies with profits that double as the owner's personal income. These are known as "pass-through" companies.

Trump controls about 500 such entities, according to his lawyers. Instead of paying at a top rate of 39.6 percent, Trump would probably be taxed closer to 30 percent. He also stands to get a break on the Alternative Minimum Tax and a modestly lower personal income tax rate. His family-managed fortune is bound to benefit from the elimination or reduction of the estate tax.

TRUMP: "We're back to the strong days of our banks and not the days of trouble pre that. We're back to the — where bankers can make loans, and community bankers can make great loans to good people. You saw what happened recently where the certain agency or bureau that was causing so much trouble to lenders, where they could not lend. They just couldn't lend. It was devastating. They were going out of business."

THE FACTS: The point he is trying to make here is that federal financial regulations have choked the ability of banks to lend and devastated the industry. He said as much earlier in the week, more succinctly, but it's not true.

Federally insured commercial banks and savings institutions reported more than 5 percent growth in the third quarter from a year earlier. Of more than 5,700 institutions reporting, more than two-thirds (67 percent) had year-over-year growth in quarterly earnings. The proportion of unprofitable banks fell. Quarterly net earnings also were up in the second quarter.

Over the longer term, the Federal Reserve says 34 firms have added more than $750 billion in capital since 2009. That capital essentially is held in reserves that would help the companies weather a future crisis like the 2008 financial meltdown that prompted steps to overhaul the financial sector. Among those steps was the creation of the Consumer Financial Protection Bureau, which many Republicans complain is overbearing and which became the subject of a power struggle this past week as Trump and Obama-era officials vied for control of it (Trump won).

As for smaller community banks, outgoing Fed chief Janet Yellen said this past week that they have indeed shrunk in recent times and federal regulation can be a weight on them. But she said their overarching problem is trying to make a profit in a low-interest-rate economy. Most small business are not reporting difficulty accessing credit, she said, though it can be struggle for the smallest of the small.

TRUMP on attempts to repeal and replace Obama's health care law: "You know, some people said, 'Oh, you failed with health care.' I said, 'What do you mean we failed? We didn't fail.'"

THE FACTS: They failed, twice. Each time Republicans could not summon the votes in their own ranks to get rid of "Obamacare." That's when Trump and the GOP in Congress turned to a tax overhaul instead.  They are almost certain to try again on health care.

TRUMP on his recent Asia trip: "That trip was a tremendous success. You know, we brought back $250 billion in contracts; that's going to be over $1 trillion very soon. That's a good — that's a good week and a half's work."

THE FACTS: For the most part, the business he's talking about did not come together during his trip or because of him. Various threads of existing or extended commerce were pulled together to resemble a notable achievement. That's not unusual when world leaders meet.  They like to have something to show for the effort, so largely symbolic advances are trotted out.

Papers signed in China during Trump's visit, for example, were largely a packaging of previously worked-out deals, tentative investments, statements of intent and extensions of business with existing Chinese customers, with some new orders. They did not reflect a solution to underlying U.S. grievances about Chinese trading practices.

THE FACTS: The tweet by Jayda Fransen of the anti-Muslim group Britain First is false. Trump retweeted it anyway.

The video shows one young man in the Netherlands punching and kicking a young man on crutches. The attacker was a Dutch citizen, not a migrant.

The Dutch Embassy responded to Trump's dissemination of the video with a tweet directed to him: "Facts do matter. The perpetrator of the violent act in this video was born and raised in the Netherlands. He received and completed his sentence under Dutch law."

THE FACTS: The circumstances of the video are not verified, but the images ring true. It's well known that Islamic extremists target people and objects of other faiths — Christians, Jews, Muslims of other sects and movements — as well as indiscriminate populations. Also well known: Anti-Muslim extremists in the U.S. and other countries of the West have torched mosques.

The video shows a man, said to be a supporter of Syria's al-Qaida affiliate then known as the Nusra Front, smashing a statue of the Virgin Mary that is half his size. The Middle East Media Research Institute identified the man as Sheikk Omar Raghba. In the video, he declares that "idols" will no longer be worshipped in the Levant before he smashes the statue in a northwestern Syrian village. The video appeared online in 2013.

Tweet with ANTI-MUSLIM VIDEO: "Islamist mob pushes a teenage boy off roof and beats him to death!"

THE FACTS: The circumstances of a violent act on a rooftop in Egypt are unclear in the blurry and shaky video. It shows someone falling from the roof of an apparent elevator shaft during a struggle, then at least one man punching the victim. Perpetrators of the roof violence were sentenced to death for killing a boy and a man.

The video was filmed days after the overthrow of Islamist President Mohammed Morsi by Egypt's military. In the video, a supporter of Morsi is seen roaming the roof of a building in the coastal city of Alexandria, raising a black flag often used by militants. Little else is obvious from the video except that a confrontation was unfolding.

The wider context of those killings was ignored — the fact that both sides had blood on their hands. It was a time of violent protests by pro-Morsi protesters and a violent military crackdown. More than 1,000 people died in the military's dispersal of Islamic protests.

TRUMP, asking in a tweet Wednesday whether MSNBC host Joe Scarborough will be fired "based on the 'unsolved mystery' that took place in Florida years ago? Investigate!"

THE FACTS: Authorities decided years ago there's no mystery to investigate, despite Trump's insinuation of wrongdoing by Scarborough when he was a congressman in Florida. Lori Klausutis, who worked in Scarborough's Fort Walton Beach congressional office, was found dead in the office in July 2001. An autopsy revealed that Klausutis had an undiagnosed heart condition and a coroner concluded she passed out and hit her head as she fell. The coroner said the head injury caused the death and no one struck her.