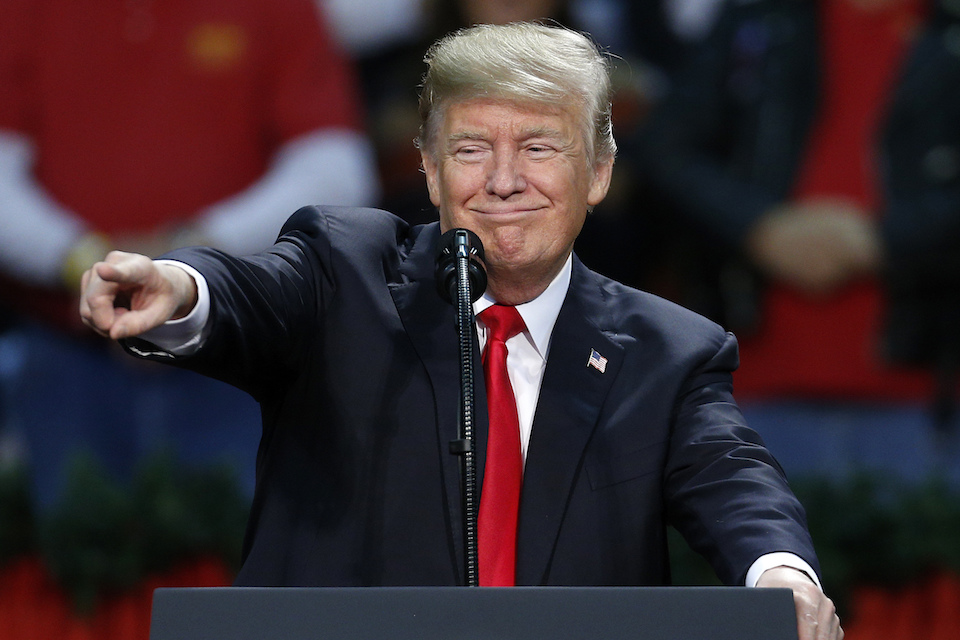 WASHINGTON (AP) — In his Alabama-ish rally, President Donald Trump falsely stated that black homeownership has hit a record high under his stewardship and made the dubious claim that he set Canada's prime minister straight on the state of trade between the two countries.

Trump spoke Friday night in Pensacola, Florida, across the line from Alabama.

The positioning was meant to help Alabama Senate candidate Roy Moore win Tuesday's election without actually having Trump set foot in a race defined by accusations of sexual misconduct against the Republican. Trump looked back on his months in office and overstated his achievements during more than an hour of boasting.

A look at some of his statements:

TRUMP, surveying the crowd: "Look at these guys, 'blacks for Trump.' I love you. I love you. By the way, now that you bring it up, black homeownership just hit the highest level it has ever been in the history of our country. Congratulations."

THE FACTS: Not true or even close.

TRUMP: "Working with Republicans in Congress we've already signed 88 pieces of legislation. We get no credit. They always say, well, President Trump really needs this tax bill because he hasn't passed any legislation. Well, so far in 10 months we've passed more during this period of time than any other president in the history of our country and the second - let's call runner up - is Harry Truman, was second."

THE FACTS: Trump's first-year legislative record pales next to that of a variety of presidents (Franklin Roosevelt, with his New Deal, signed 14 historic laws in his first 100 days).

The tax package Trump may soon sign would mark his first major legislative achievement after months of false starts and frustrations on health care and more. His promised infrastructure initiative got sidelined but appears in the offing.

Trump signed a law strengthening accountability at the Veterans Affairs Department, used executive orders to roll back Obama-era regulations and policies and, perhaps most significantly, won confirmation of a conservative Supreme Court justice, Neil Gorsuch. But legislatively, his record is thin, despite having Republican majorities in Congress.

All presidents sign plenty of bills that have little consequence; most don't make so much of it. Among Trump's routine signings: naming a Veterans Affairs health clinic in Butler County, Pennsylvania, after Bataan Death March survivor Abie Abraham, appointing a regent at the Smithsonian Institution, naming a federal building and courthouse in Nashville, Tennessee, after late Sen. Fred Thompson.

TRUMP on a conversation with Canadian Prime Minister Justin Trudeau about trade: "He said, 'I'm telling you that Canada has a deficit with the United States.' I told my people, in front of a lot of people, I said, go out and check - and he was right. Except he forgot two categories - lumber, timber and energy. Other than that, he was right.

When you add them altogether we actually have a $17 billion deficit with Canada, right? So, he forgot a couple of categories that he didn't want to mention."

THE FACTS: Trump's accounting is puzzling and at odds with U.S. trade statistics.

Trudeau is right that the U.S. has a trade surplus with Canada, according to those numbers.

The U.S. ran a $12.1 billion deficit with Canada in trade on goods. That was offset by a $24.6 billion surplus in trade of services. Trump may have been ignoring services — half of the equation on trade — but if so his numbers still don't match his government's.

TRUMP on his critics in Washington: "They will lie and leak and smear because they don't want to accept the results of an election where we won by a landslide."

THE FACTS: His win was far from a landslide.

His winning margin in the Electoral College is far closer to the narrowest win in history than to the widest.

The final Electoral College margin was Trump 306, Hillary Clinton 232, for a winning percentage of just under 57 percent. That ranks the 2016 election as the 13th closest of the 58 presidential elections in U.S. history, according to a tally by Claremont McKenna College political scientist John Pitney.

As well, Trump lost the popular vote to Clinton by more than 2.8 million votes.

TRUMP: "Since the election, we have created more than $5 trillion in new economic wealth just in the stock market alone. We're not including real estate and other values, $5 trillion."

THE FACTS: According to the Federal Reserve, household wealth has risen by about $5 trillion since the end of last year, but that figure does include home values. Either way, stock ownership is highly concentrated in the United States, so a rising market is mostly benefiting a limited population.

Ten percent of Americans owned 84 percent of the value of U.S. stocks in 2016, according to Edward Wolff, an economist at New York University.

TRUMP: "You know, we have factories pouring back into our country. Did you ever think you would hear that? I used to tell you, that's going to happen."

THE FACTS: Factories are not pouring into the country, according to available data. Spending on the construction of factories has dropped 14 percent over the past 12 months. There has been a steady decline in spending on factory construction since the middle of 2015 — a trend Trump has yet to reverse despite his claims otherwise.

The existing manufacturing sector, though, has been doing a steady dose of hiring. This appears to reflect the synchronized global growth that has aided a rebound in manufacturing after setbacks in 2016 from a stronger dollar and low energy prices. In November, manufacturing added 31,000 jobs for a gain of 189,000 from a year earlier.

THE FACTS: It's not true that wages haven't gone up for 20 years.

The latest jobs report shows average hourly earnings up 2.5 percent over the past 12 months, roughly the same pace of growth as the year before, when Barack Obama was president.

Wages were rising faster in December 2016, up by 2.9 percent. Average hourly wage figures are volatile but they don't show an upward trend under Trump.

The last time unemployment was this low — in 2000 — that figure was rising at 4 percent. Inflation-adjusted median household incomes, meantime, have barely budged for several decades.