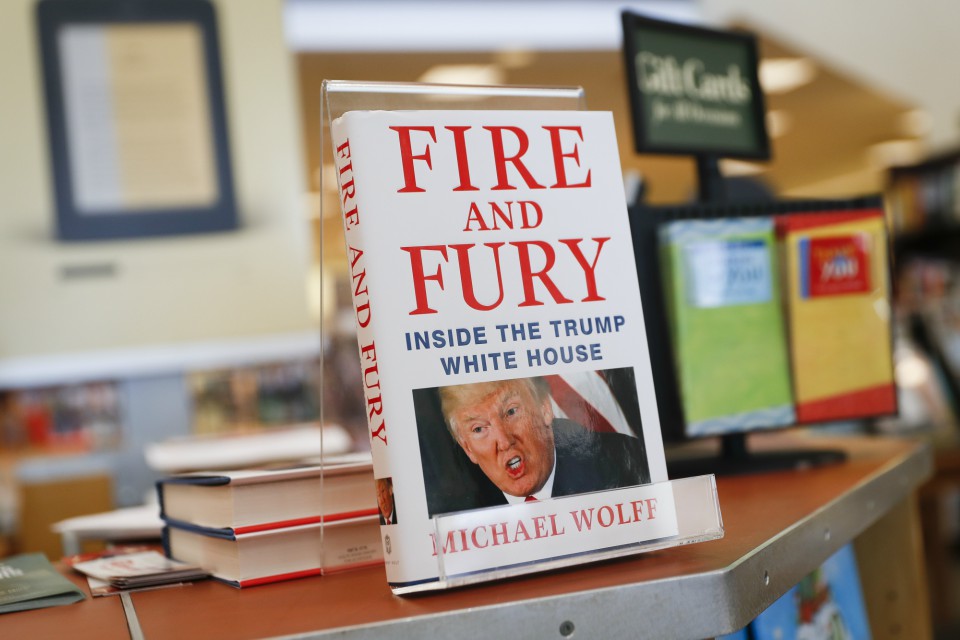 WASHINGTON (AP) — The acrimony surrounding former White House adviser Steve Bannon's very public break with President Donald Trump is escalating, suggesting a permanent split between the president and the pugilistic strategist who helped put him in the Oval Office.

The new fissure in an already fractious Republican Party cast doubt on Bannon's hopes to foment a movement centered on "Trumpism without Trump."

It already has cost him a key backer. Rebekah Mercer, the billionaire GOP donor and Breitbart co-owner, issued a statement Thursday distancing her family from Bannon.

"I support President Trump and the platform upon which he was elected," she said. "My family and I have not communicated with Steve Bannon in many months and have provided no financial support to his political agenda, nor do we support his recent actions and statements."

White House officials described the president as furious at Bannon's criticisms, laid out in an explosive new book that quoted the former aide as questioning Trump's competence and describing a June 2016 meeting at Trump Tower between Donald Trump Jr., Trump campaign aides and a Russian lawyer as "treasonous" and "unpatriotic."

On Twitter Thursday night, Trump said the book was full of "lies, misrepresentations and sources that don't exist." He also came up with a new nickname for Bannon: "Sloppy Steve."

A parade of administration officials and allies worked to discredit Bannon as a disgruntled has-been. White House press secretary Sarah Huckabee Sanders went so far as to suggest that Bannon ought to be booted from Breitbart, the populist website he helps run.

"I certainly think that it's something they should look at and consider," she said.

Michael Wolff, author of "Fire and Fury: Inside the Trump White House," spoke on NBC's "Today Show" Friday, defending his reporting and saying the president's efforts to halt publication have been good for sales.

Bannon had helped Trump form a coalition of anti-establishment Republicans, blue-collar working class and economic nationalists that launched him to the White House, but Trump had long ago grown frustrated that Bannon seemed to be overstepping his role as a staffer.

The self-appointed keeper of Trump's nationalist flame during the president's first six months in office, Bannon had soured on the president even before he was pushed out of the White House for feeding the perception that he was Trump's puppeteer.

None of Bannon's close associates was willing to speak publicly about the fallout but privately conceded that the explosive comments may forever tarnish his brand. Bannon's political appeal had been deeply tied to the perception that he was an ally of Trump's. Those close to Bannon feared that the connection had been permanently severed.

Bannon was preparing to launch a nonprofit organization designed to help give Trump's brand of conservatism populism a permanent base. It's unclear how Bannon's new rift with the president, and the related impact on major donors, will affect the organization, dubbed Citizens of the American Republic.

Current and former White House officials, speaking on condition of anonymity to discuss internal conversations, said Bannon had miscalculated by attacking the president and his family. Much of Bannon's political clout, they argue, stemmed from the assumption that he was acting with the imprimatur of the president, even if Trump wasn't visibly in lockstep.

Some Trump allies also expressed satisfaction that Bannon appeared to be finally cast out of the president's inner circle.

Republican Senate Majority Leader Mitch McConnell, a longtime punching bag for Bannon, reveled in the aide's break with the president. "I'd like to associate myself with what the president had to say about Steve Bannon yesterday," he said mischievously Thursday.

Since leaving the White House, Bannon spent much of his time courting donors to help finance his self-declared war on the Republican establishment. He vowed to find Republican challengers for virtually every GOP senator seeking election this fall, chiefly for the purpose of electing candidates who would remove McConnell as majority leader.

Others who have received boosts from Bannon, including Arizona Senate candidate Kelli Ward and potential Mississippi Senate challenger Chris McDaniel, were more circumspect, wary of alienating either faction of the party's insurgent grassroots.

"The only concern left was whether the president might give Bannon a temporary lease on life," he said. "But this repudiation was so methodical and so absolute that it really slams the door on that."

White House aides have tried to look past other loaded comments from Bannon in recent months while seeking to marshal his political following on the president's behalf.

But they warned Bannon's allies over the last 24 hours that Trump would likely never take his calls again. However, there are few absolutes in Trump's orbit, White House aides acknowledge, and he has been known to bury the hatchet with those he perceived to have wronged him.

Some Trump allies even encouraged him to welcome Bannon back into his good graces.

"You can either excise him or shun him, which I don't think is the best recommended strategy, or tell him to knock it off and bring himself back into the fold," Anthony Scaramucci, the former White House communications director, said on MSNBC.

Trump coolly noted Thursday that his full-throated counterassault appeared to have its desired effect on Bannon.

"Fire and Fury: Inside the Trump White House," quickly shot atop Amazon's best-seller list, and the publisher moved up its release date by four days, to Friday.