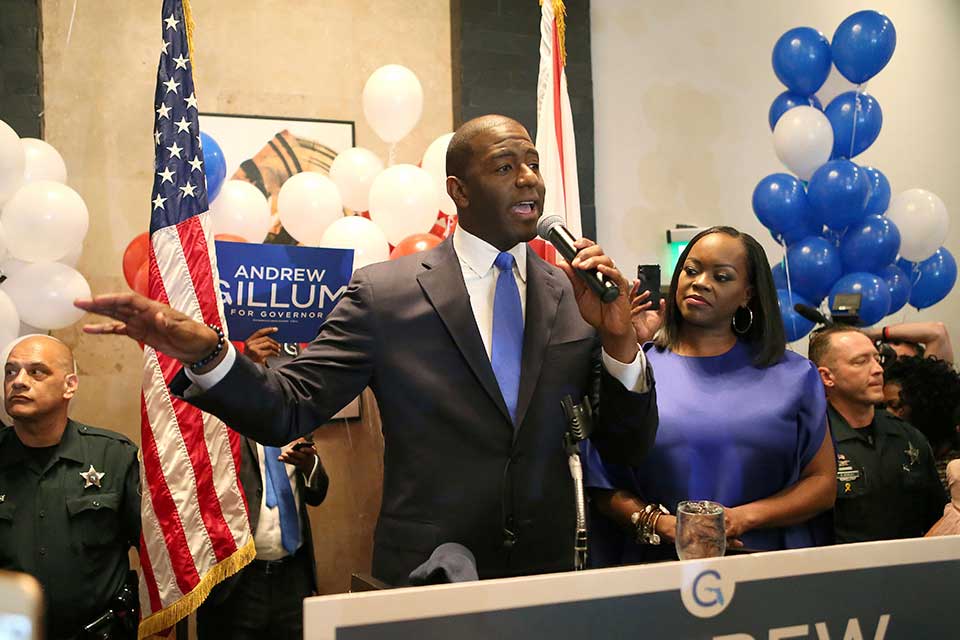 With Andrew Gillum's upset victory in Florida, black candidates have won the Democratic nomination for governor in three states this year in a historic turn largely attributed to voter backlash against President Donald Trump.

Gillum, Stacey Abrams in Georgia and Ben Jealous in Maryland were all aided in recent months by strong turnout, especially among black voters.

"This moment is defined by the politics of Trump and the Republican Party, which are grounded in bigotry, fear and racism," said Adrianne Shropshire, executive director of Black PAC. "I think voters are responding to that by showing up to the polls as a protest to the politics that we're seeing right now."

Voters have elected just two black governors in U.S. history — in 2006 in Massachusetts and 1989 in Virginia.

Abrams and Jealous face uphill battles in November, while Gillum's contest is expected to be close. They will have to figure out how to translate the enthusiasm among primary voters to the general election, and will have to win over moderate Democrats, independents and probably some Republicans.

The GOP candidates in Georgia and Florida are big supporters of Trump, setting up stark contrasts in both contests.

"It's going to be very interesting in Georgia and Florida with the personalities of the Republican nominees and the tactics they've already taken and verbiage they've used," said Kimberly Peeler-Allen, co-founder of Higher Heights for America PAC, a group that focuses on black female candidates and voters.

"It's going to be really ugly before it's over."

In fact, race became an issue in the Florida contest on Wednesday, the morning after the primary, when Gillum said voters aren't looking for a misogynist, racist or bigot, and the Republican nominee, Rep. Ron DeSantis, said Floridians shouldn't "monkey this up" by choosing his African-American opponent.

Such a fantastic win for Ron DeSantis and the people of the Great State of Florida. Ron will be a fantastic Governor. On to November!

The nomination of three black major-party candidates for governor ties the mark set in 2006, when there were two black GOP nominees and Democrat Deval Patrick, who went on to win election in Massachusetts.

Abrams, Gillum and Jealous represent the more liberal wing of the Democratic Party, with backing from Sen. Bernie Sanders, and Republicans are already casting them as too liberal for their states. Florida and Georgia voted for Trump in 2016, while Maryland went for Hillary Clinton.

Just hours after Gillum won his primary, Trump went on Twitter to call him "a failed Socialist Mayor" and point out the crime rate in the city Gillum leads, Tallahassee.

"This has nothing to do with color, gender or any other identifying characteristic," he said.

"This has to do with far-left policies that would wreck state budgets and hurt job growth."

The hope for all three of this year's candidates lies in a surge of turnout from black and liberal voters similar to the one that carried Barack Obama to the presidency 10 years ago.

In Florida, Gillum defeated four other Democrats — none of them black — on Tuesday. While his campaign was outspent, Gillum was backed by millions of dollars in independent spending by Tom Steyer and George Soros, among the wealthiest supporters of liberal causes. Gillum prevailed in a state where blacks are about one-sixth of the population.

The political action committee New Florida Vision endorsed him in June and spent the next two months registering 19,000 new voters, knocking on 40,000 doors and reaching out to 200,000 people through text messages, mail or social media. The goal was to engage the kinds of black voters who helped Obama but didn't show up in the 2016 elections.

"Once it clicked for them that there was someone in the race focused on their interests," said Dwight Bullard, political director for New Florida Vision PAC, "they were attracted to those ideas and the person who embodied them."

Associated Press writer Brian Witte in Annapolis, Maryland, contributed to this article. Whack is The Associated Press' national writer on race and ethnicity.