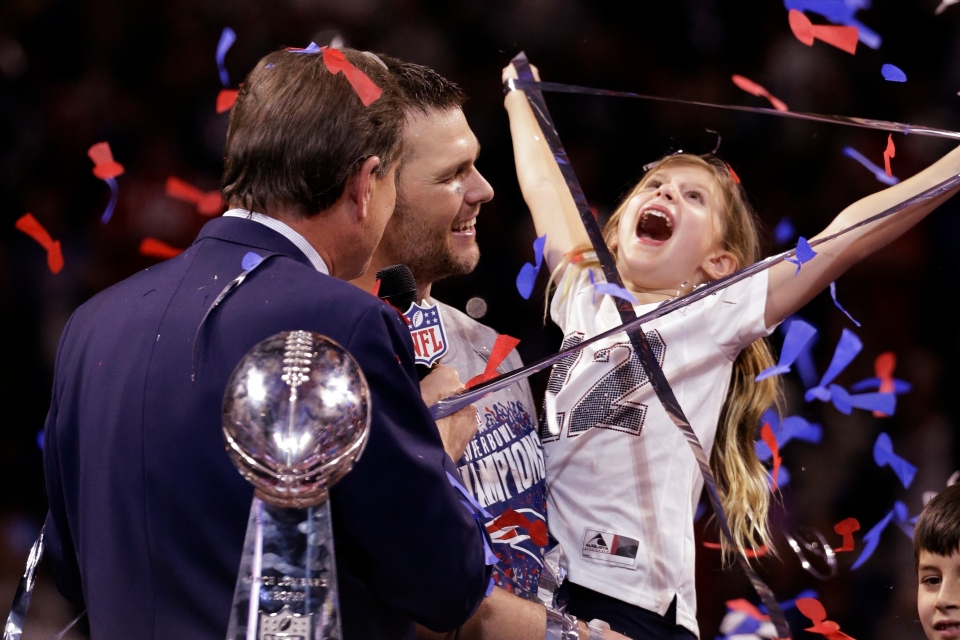 Graying but still gritty, Tom Brady, Bill Belichick and the Patriots came to the Super Bowl intending to stave off, for at least one more game, the inevitable onslaught of the NFL's future.

Pro football never looked flatter, older and more stuck in the days of the VCR than it did Sunday.

In a Super Bowl only New England could love, the Patriots won their sixth title by lumbering their way to a 13-3 victory over the Los Angeles Rams — that young, brash, high-flying team with the 33-year-old coach and the 24-year-old quarterback who were, we thought, changing football before our very eyes.

If only we could've kept them open.

Among the Super Bowl records set: Fewest points by both teams (16); fewest points by the winning team (13); fewest combined points through three quarters (6); most consecutive drives ending with a punt (8 by the Rams); longest punt (65 yards).

The halftime show with Maroon 5 offered no relief — roundly ripped, including by an Associated Press reviewer who called it "Empty. Boring. Basic. Sleepy."

He could have said the same about the game. But give credit where it's due.

The defense designed by Belichick turned Rams quarterback Jared Goff into a jittery mess. He completed 19 of 38 passes for 229 yards, with an assortment of rushed throws, misread coverages and, in the tiny windows in which LA showed any sign of life, a pair of terrible passes.

One, trailing 3-0 in the third quarter, was late and high to wide-open Brandin Cooks in the end zone; the other, trailing 10-3 with 4:17 left in the fourth quarter, was high under pressure for an easy interception by Patriots cornerback Stephon Gilmore that essentially ended the game.

"I know I definitely have a lot to learn from this one," said Rams coach Sean McVay, who, at 33, is exactly half the age of Belichick.

McVay has been the flavor of the month in the copycat NFL. Other teams have hired away three of his assistant coaches over the last two years, as the league tries to catch up with his newfangled offense that cracked 30 points in 13 games this season.

On Sunday, it managed one 53-yard field goal from Greg Zuerlein and didn't take a snap inside the New England 20.

It was five plays and included four straight completions: 18 yards to Rob Gronkowski, 13 yards to Julian Edelman, seven yards to backup running back Rex Burkhead, then a 29-yard teardrop placed perfectly into the arms of Gronkowski, who was double-covered. Sony Michel ran it in from 2 yards for the touchdown with 7 minutes left.

Last year, the Patriots fell 41-33 to Philly in a back-and-forth thriller that essentially featured one good defensive play: a sack and strip on Brady by Eagles defensive end Brandon Graham with the clock running down.

The year before, the Patriots scored 31 points in the second half and overtime for a riveting 34-28 comeback win over Atlanta and title No. 5.

New England's road to a sixth Lombardi Trophy — tied with Pittsburgh for the most — was never easy this season. The Patriots lost five times, didn't have home-field advantage through the playoffs and, after every loss, were beset by questions over whether the 41-year-old Brady and his 66-year-old coach might be winding down.

Through it all, though, they could score. New England averaged 27.2 points a game. And in the run through the playoffs, the offense scored 10 touchdowns and Brady barely got touched, and never got sacked.

They were not clicking like that Sunday at the $1.5 billion Mercedes-Benz Stadium, where 70,081 fans — most of them cheering for New England — watched the game.

Other than Edelman, whose 10 catches for 141 yards won him MVP honors and made him look like a combination of Michael Irvin and Jerry Rice considering everything happening around him, the Patriots were out of sync.

New England outgained Los Angeles 195-57 in the first half, but settled for two field goal attempts — one miss and one make — for a 3-0 lead at the break.

It was 3-3 heading into the fourth quarter — the fewest points through the first 45 minutes of any playoff game since a 1980 barnburner between the Bucs and Rams that LA won 9-0.

Maybe the biggest irony of all: The New England dynasty's five previous Super Bowl victories came by 3, 3, 3, 4 and 6.

Two were decided on the last play. The other three came down to the final minutes.

Compared to that, this was a veritable runaway.

On a day when New England held LA running back Todd Gurley to 35 yards, when LA couldn't muster a drive longer than five plays for nearly three quarters, and when LA's Johnny Hekker (eight punts, 46.3 yard average) was his team's most effective player, a 10-point lead at the end felt like a million.

And a game only the Patriots could love.