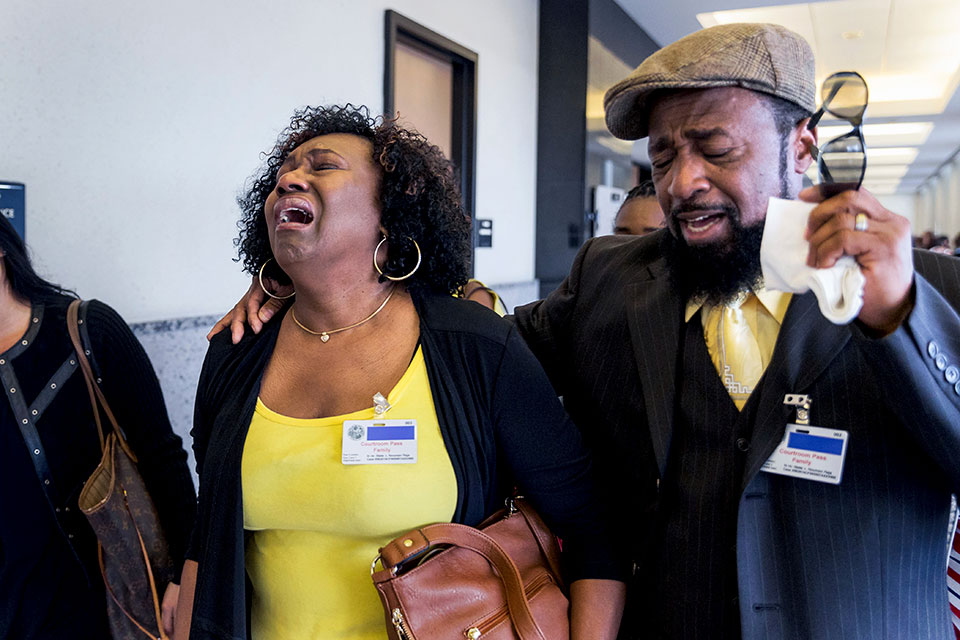 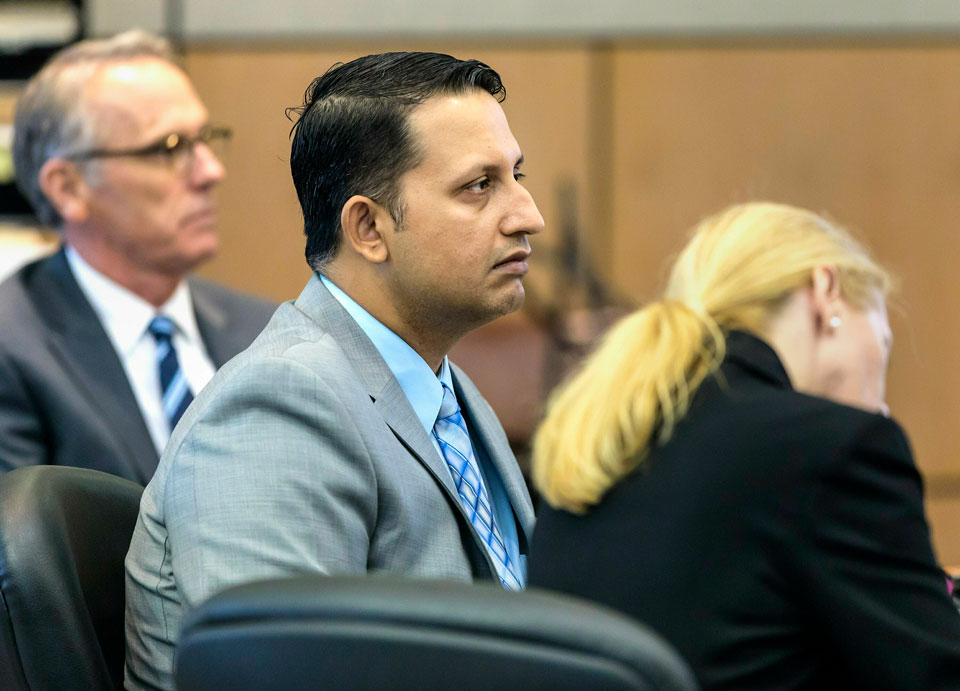 Nouman Raja, 41, faces a mandatory minimum of 25 years at sentencing April 26, and could spend his life in prison for the death of Corey Jones, 31.

The four-man, two-woman jury deliberated for four hours. Raja didn't react as the verdict was read. About 25 relatives and supporters of Jones looked on, some weeping. One said "the sweetest sound was the click of those handcuffs" after Raja was led away.

They held a prayer circle outside the courtroom, shouting praise for the verdict as many sobbed. A housing inspector and part-time drummer, Jones came from a family of Christian ministers and was scheduled to perform at church the morning he died.

"Corey has been here - his soul is not here but he is definitely here in our hearts," said C.J. Jones, the victim's brother and a former Cleveland Brown football player. "He walked us through this."

Prosecutors said Raja, one of few police officers nationwide convicted of an on-duty shooting, escalated what should have been a routine interaction.

Prosecutors charged Raja with manslaughter, saying his actions created the confrontation and showed "culpable negligence." They charged him with attempted first-degree murder, saying that although they couldn't prove beyond a reasonable doubt which of the six shots killed Jones, the second volley was a conscious effort to kill him as he fled.

Raja, of Asian descent, was working on an auto burglary investigation team when he spotted Jones' SUV at 3:15 a.m. Oct. 18, 2015. Jones was returning home from a nightclub performance when his vehicle stalled. He had a concealed-weapons permit and carried a .38-caliber handgun, purchased days earlier to protect his $10,000 drum set, which was in the SUV.

Wearing plain clothes, Raja drove an unmarked van the wrong way up an off ramp and stopped a few feet from the broken-down vehicle.

Prosecutors said Raja never identified himself as an officer and acted so aggressively that Jones must have thought he was about to be carjacked or killed. Raja said he first thought the SUV was empty, but then saw Jones inside. Raja's supervisor testified the officer had been told to don a police vest if he approached a civilian. He didn't. Prosecutors also questioned why Raja didn't pull his badge from his pocket.

What police didn't know at first was that Jones had been talking to a tow-truck dispatcher on a recorded line. That recording shows Jones saying "Huh?" as his door opens. Raja yells, "You good?" Jones says he is. Raja replies twice, "Really?" with Jones replying "Yeah." 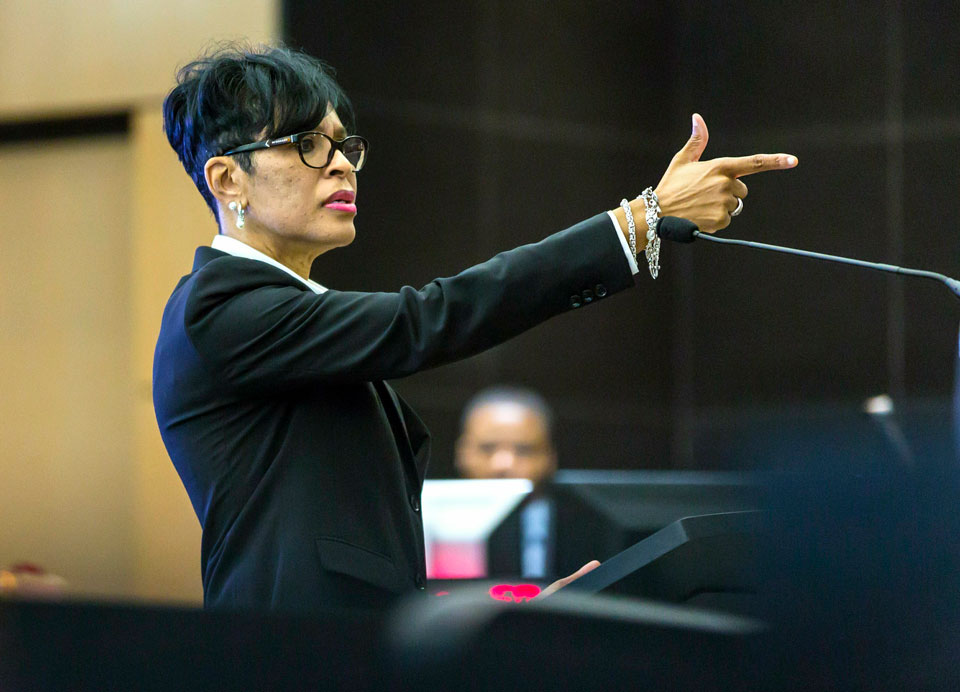 Prosecutors believe Jones pulled his gun and tried to get away. Raja fired three shots; Jones ran down an embankment. Prosecutors said he threw his gun, found 125 feet (38 meters) from his body, but Raja fired three more times, 10 seconds after the first volley. Jones was killed by a bullet through his heart.

A medical examiner testified Jones would have dropped feet from where the fatal shot struck him. He also was shot once in each arm.

Prosecutors said Raja, not knowing of the tow-truck dispatcher recording, tried to deceive investigators. He told them in a video-recorded interview hours after the shooting he said "Police, can I help you?" as Jones jumped from the SUV. He told investigators Jones leapt backward and pointed his gun, forcing him to fire. Raja said Jones ran but turned and again pointed his gun, forcing him to fire the second volley.

C.J. Jones said his brother "was a good person" who wouldn't have confronted Raja.

"If that dude would have said he was a police officer right off the bat, this would have never happened," he said.

Attorney Benjamin Crump, who represents Jones' father and siblings, called the verdict by an all-white jury a victory for African-Americans and "anyone who believes in justice."

"When there is a young Black man lying dead on the ground, there are different rules that apply — that is our reality in America," Crump said at a news conference surrounded by Jones' relatives. "Many people in America don't want to believe that police officers intentionally kill young Black people, but it is our belief they do." When asked what sentence Raja should receive, Crump and others replied, "What Corey would have got if he shot Raja."

Clinton Jones Sr., Jones' father, cried after describing how the family went to his son's grave to celebrate the verdict and "let him know, Corey, son, we did it."

Palm Beach Gardens fired Raja shortly after the shooting. He'd been under house arrest since he was charged in 2016.