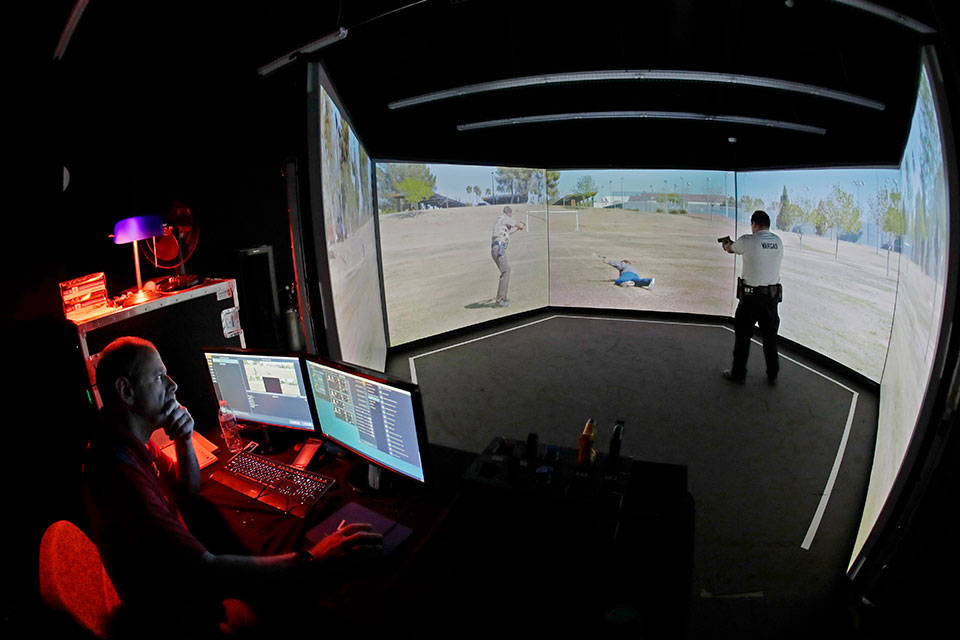 SEATTLE (AP) — When an Iowa mother tried to take her child from her husband during an argument on a snowy sidewalk in 2015, an officer stepped in to stop the scuffle. But he accidentally fired his weapon as a dog approached, killing the woman as her family watched in horror. 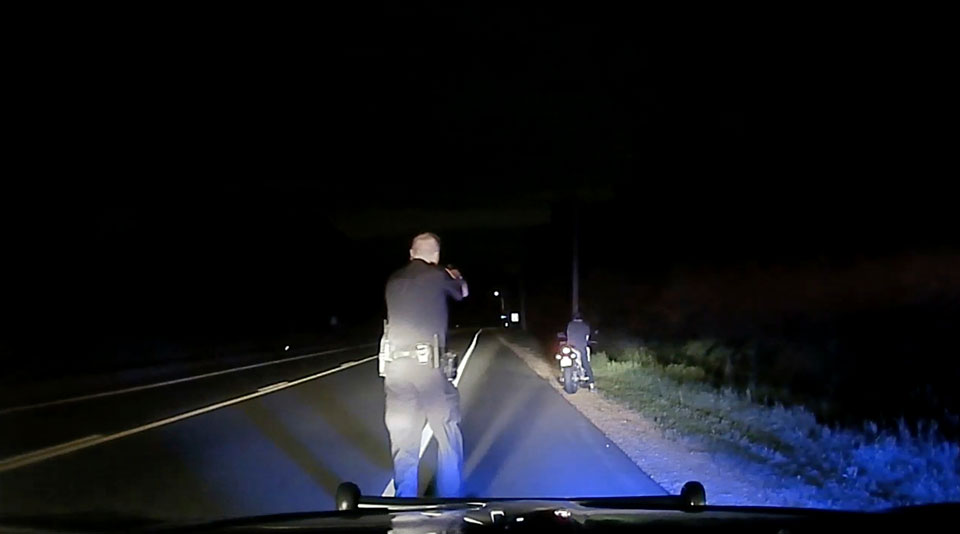 In this June 20, 2015, still frame taken from police video, Eden Prairie Police Sgt. Lonnie Soppeland, left, keeps his gun trained on Matthew Hovland-Knase, right, after Soppeland accidentally shot Hovland-Knase in the arm following a pursuit in Eden Prairie, Minn. Accidental shootings by police happen across the United States every year, an Associated Press investigation has found. (Eden Prairie Police Department via AP)When a Minnesota sergeant stopped a motorcyclist after a 2015 high-speed chase, he stepped out of his patrol car with his firearm drawn, flush with adrenaline, and accidentally shot the man in the arm.

And an Arkansas police officer fatally shot a suspect in 2012 as she tried to get him into handcuffs.

Accidental shootings by law enforcement have happened in recent years at agencies small and large and at all levels — city, county, state and federal — across the U.S., an Associated Press investigation has found. They've caused hundreds of injuries to officers, their partners, suspects and bystanders, and sometimes they've caused deaths.

Experts say it's because officers don't get the training they need to handle their guns proficiently, especially in life-and-death situations.

The methods used to train officers with their firearms "create the illusion of learning" but are inadequate for the demands of today's policing, said Bill Lewinski, executive director of the Illinois-based Force Science Institute, which provides research and training to law enforcement agencies.

Officers are most proficient with their guns immediately after finishing a police academy, experts say.

After that, most are tested only once or twice a year in "qualifications" that measure a minimum level of firearms proficiency. There are no federal guidelines for these tests so there are thousands of different standards across the county.

No one tracks these shootings nationwide, so the AP collected media reports and surveyed agencies across the country through public records requests. The review was not comprehensive due to the sheer number of U.S. law enforcement agencies and a lack of reporting requirements for such shootings. But it provides a snapshot of the problem, documenting 1,422 unintentional discharges since 2012 at 258 agencies.

The tally includes any incident in which a gun went off and the officer didn't intend it to, whether they were cleaning or unloading a weapon or surging with adrenaline while responding to a call. Some shootings occurred because of muscle reflexes, experts said, or because the officer simply tripped.

Countless law enforcement officers safely perform their duties every day, but some experts say even a small number of accidental shootings is unacceptable because they're preventable.

"Ninety-nine out of 100 times, there is not something wrong with the gun," said Paul Markel, a former police officer and firearms instructor in Mississippi.

"It's the person holding it." 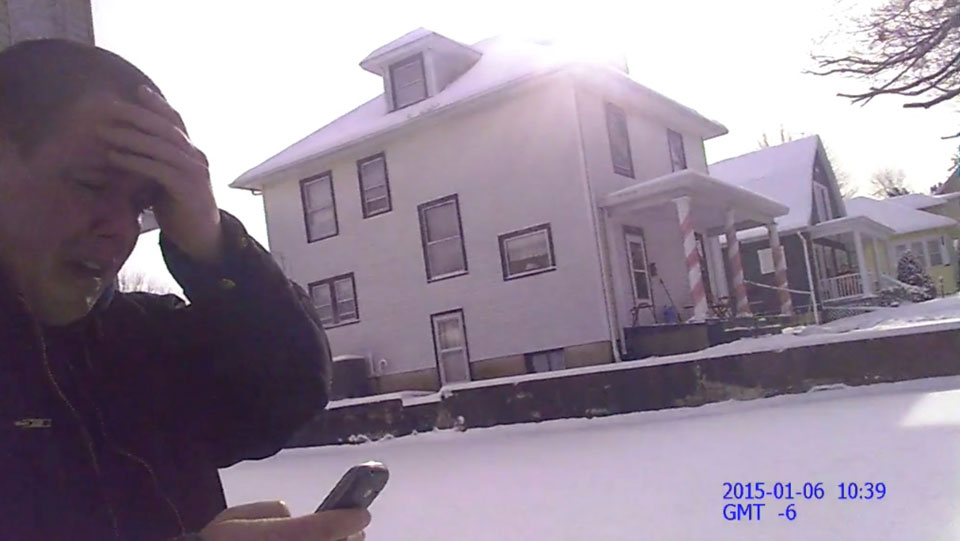 In this Jan. 6, 2015, still frame taken from police body camera video, Gabe Steele, left, reacts after his wife, Autumn Steele, was accidentally shot and killed by a Burlington Police officer responding to a domestic dispute call near the couple's home in Burlington, Iowa. Accidental shootings by police happen across the United States every year, an Associated Press investigation has found. (Burlington Police Department via AP)In the 2015 Iowa case, Autumn Steele was arguing with her husband and trying to grab their 3-year-old son from him outside their Burlington home when Officer Jesse Hill approached. The husband, Gabe Steele, had called 911.

But the couple's dog darted toward Hill, and he lost his balance and fired two shots as he fell backward in the snow. One bullet hit the dog, the other hit 34-year-old Autumn Steele, killing her.

The AP found 21 cases where people died in accidental shootings by police. It identified another 134 cases where the officer injured himself, and 45 where an accidental discharge injured another officer. An officer accidentally shot innocent bystanders in 34 instances and suspects in 19.

Unintentional shootings typically lead to two investigations: An outside agency determines if charges should be filed, and internal review examines whether policies were violated and punishment such as suspension is appropriate.

In Autumn Steele's case, a prosecutor compared the evidence against Iowa's homicide statutes and decided Hill could not be charged. Steele's family filed a wrongful death suit against the officer and city and reached a $2 million settlement.

Hill's lawyer did not respond to a request for comment from the AP.

Gabe Steele, 40, thinks Hill should have been held accountable.

"He just got to go on vacation and get paid for it, for taking my son's mother away," Steele told the AP.

"No one has ever apologized to me and my son. That hurts."

Agencies have different terms for these shootings, including "accidental," "negligent," or "unintentional" discharges.

But Doug Tangen, firearms program manager at Washington state's law enforcement training center, argues they are all caused by a degree of negligence because at some point the officer violated one or more of the four universal firearms safety rules: Assume all guns are loaded, always point the muzzle in a safe direction, keep your finger off the trigger, and be sure of your target and what is beyond it.

In some cases, the officer was hyped up due to adrenaline, which can severely impair the senses. Other accidental shootings have been attributed to muscle reflexes — one hand or arm jerks or contracts, causing the other hand or arm to jerk or contract.

Experts agree the way to reduce them is to rethink training, starting with the amount required.

While all academies require cadets to undergo a certain number of hours of firearms instruction, the AP found how many varies widely.

Georgia, Illinois and Indiana, for example, call for 40 hours of specific firearms training. Washington state requires 90, but once officers go to work for a department, the amount of additional training they receive is uncertain, said Sean Hendrickson, an instructor at the Washington State Criminal Justice Training Commission, which trains the state's police and sheriff's deputies.

Another issue is the type of training used. Most academies employ "block and silo" methods, which bombard officers with information and make it difficult to retain, experts say.

What's lacking are standards for firearms training at the academy and throughout an officer's career.