Trump Allies in Americas Block Africans' Path to US Asylum 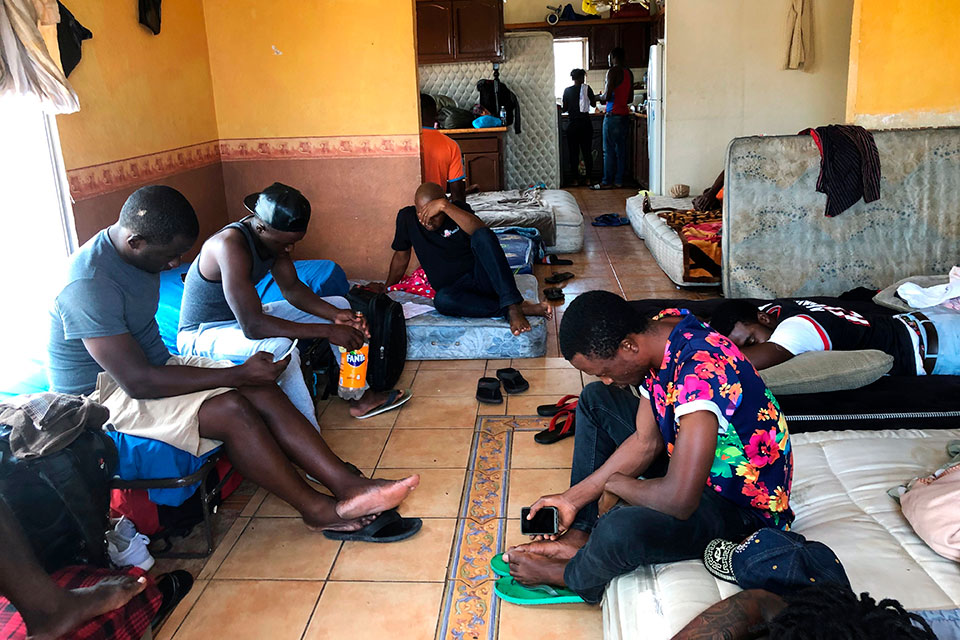 TAPACHULA, Mexico (AP) — President Donald Trump isn't the only world leader making it virtually impossible for many Africans to get asylum in the United States. He's getting plenty of help from allies in the Americas.

Ecuador is closing its doors as one of the few countries in North and South America to welcome African visitors, depriving them of a starting point for their dangerous journeys north by land. If asylum-seekers make it to Mexico, they face a virtual barricade near its southern border with Guatemala.

Trump's allies are blocking a path for Africans fleeing violence in their homelands as those countries face a U.S. president who has used economic leverage to get help in curtailing immigration. Ecuador is pursuing a trade deal with Trump, while Mexico is trying to stay in his good graces after his threat to increase tariffs prompted its crackdown on illegal immigration last year.

People from Cameroon, who are escaping bloodshed that has killed tens of thousands, often win asylum in the U.S. even more than other Africans, but they first must reach American soil. Most are English speakers fleeing torture inflicted by a French-speaking government at war with separatists.

Dozens of them are languishing in Tapachula, a Mexican city of about 300,000 people in a coffee- and banana-growing region along the Guatemalan border.

"I can't go back to my country. I can't go forward.

"I'm stuck. I don't know what to do," a 25-year-old Cameroonian said recently at a guest house where he's staying and relies on handouts to eat.

The man spoke on condition of anonymity because he feared jeopardizing his immigration status in Mexico.

Trump has called asylum "a scam" and adopted several policies to reduce claims, including denying asylum to anyone who passes through another country on the way to the U.S. without seeking refuge there first. Border arrests plummeted 78% in January from a 13-year high in May.

While Ecuador's 2008 constitution embraces "universal citizenship" that allows almost anyone to visit, its government said in August that people from 11 countries need a visa to come, including from Cameroon and six other African nations. Twelve countries already faced visa restrictions, half of them in Africa.

"Universal citizenship is a principle that is not open to debate and not questioned in the sense that it is valid, an aspiration," he said in an interview published in El Universo newspaper. The challenge, he said, is "to avoid a regime of universal citizenship that is so open we have to be subject to threats that can affect us and third countries."

Ecuador's crackdown comes as Trump dangles a trade deal. He said he was working on it when President Lenin Moreno became the first leader of the small South American nation to meet with a U.S. president in Washington in 17 years.

Trump drew a contrast between Moreno and his leftist predecessor.

"Ecuador had a very unusual outlook on life but, with your great president, he realizes how important it is to get along with the United States," Trump told reporters of Moreno.

After the Oval Office meeting last month, the acting deputy U.S. Homeland Security secretary, Ken Cuccinelli, said on Twitter: "Hopefully we can all work together to reduce illegal immigration out of Ecuador."

Cameroonians won U.S. asylum in 81% of cases in the 2019 fiscal year, compared with 29% for all nationalities, according to court data analyzed by Syracuse University's Transactional Records Access Clearinghouse. Ethiopians had a 77% success rate; Eritreans, 67% and Nigerians, 58%.

To seek asylum in the U.S., Africans fly to South America and travel north by land, on journeys where many get robbed or die from hunger and thirst. It's faster than seeking refugee status, which has always been an extreme long shot with years of waiting — even more so now that Trump has dramatically cut the number of refugees the U.S. will take.

People from Cameroon feel a 'connection' to the US

Cameroonians also felt an affinity with the United States over a shared language, Lamarche said. Many have settled in the Washington, D.C., Dallas and Houston areas.

"Everyone had a connection," Lamarche said.

More than 2,400 Cameroonians visited Ecuador in 2019, more than three times the previous year, according to government records, including the 25-year-old man stuck in southern Mexico.

He fled Cameroon after being jailed twice on allegations of opposing the government, where he was beaten, forced to lay down in water and walk on his knees on a hard floor.

Being imprisoned in Cameroon "was a lot of stress," the man said. "You don't feel where they beat you.

"They kick you with a heavy boot. They smash my toes."

Once in South America, he walked six days through the lawless jungle of the notorious Darien Gap between Colombia and Panama. He ran out of food and saw friends swept away by rushing rivers. He said assailants raped women, robbed him of $500 and stole watches and phones.

After three months of waiting for travel documents to leave southern Mexico for the U.S., he left without them in October and was jailed for two months after his bus was stopped at a government checkpoint.

Back in Tapachula, the largest Mexican city along Guatemalan border, he slept on the streets and begged for money until a guest house owner allowed him to sleep on cushions on a hallway floor. For food, he relies on the charity of housemates, who sleep four to a room.

"I don't know what I can do to leave this place," he said. "They're not giving me papers."

Last summer, dozens of Cameroonians arrived daily in Tijuana, putting their names on a list of people waiting to be processed for U.S. asylum. Now, hardly any reach the Mexican border city.

A hotel in Tijuana's red light district rented about 15 rooms to Cameroonians last summer — three in each one. By February, a desk clerk said Cameroonians occupied only two rooms.

Solano reported from Quito, Ecuador, and Spagat from Tijuana, Mexico.