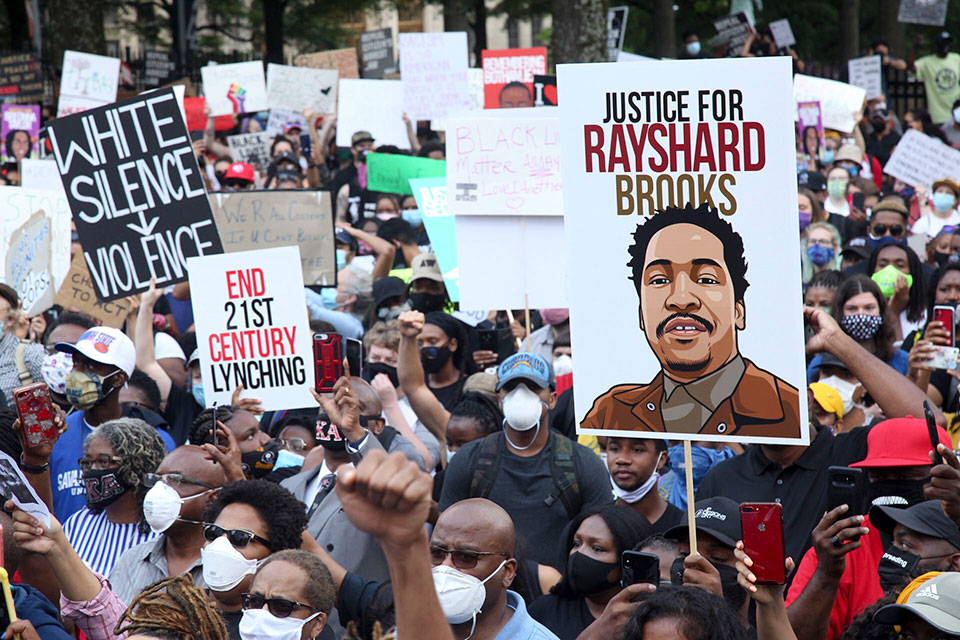 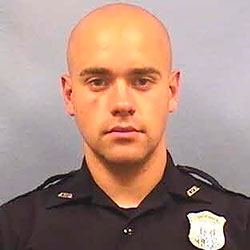 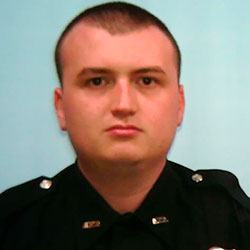 This undated photo provided by the Atlanta Police Department shows Officer Devin Brosnan. Brosnan was placed on administrative duty and another officer was fired following the fatal shooting of a Black man, the police department announced early Sunday, June 14, 2020. (Atlanta Police Department via AP)ATLANTA (AP) — The Atlanta officer who fatally shot Rayshard Brooks in the back after the fleeing man pointed a stun gun in his direction will be charged with felony murder and 10 other charges, a prosecutor said Wednesday.

Garrett Rolfe kicked Brooks while he lay on the ground and the officer with him, Devin Brosnan, stood on Brooks' shoulder as he struggled for life after a confrontation Friday night, Fulton County District Attorney Paul Howard said at a news conference.

Rolfe had already been fired after he fatally shot Brooks, 27, on Friday night. Brosnan, who will be charged with aggravated assault and other crimes, had been placed on administrative leave.

The news came as Republicans on Capitol Hill unveiled a package of police reform measures and the movement to get rid of Confederate movements and other racially offensive symbols reached America’s breakfast table, with the maker of Aunt Jemima syrup and pancake mix dropping the 131-year-old brand. 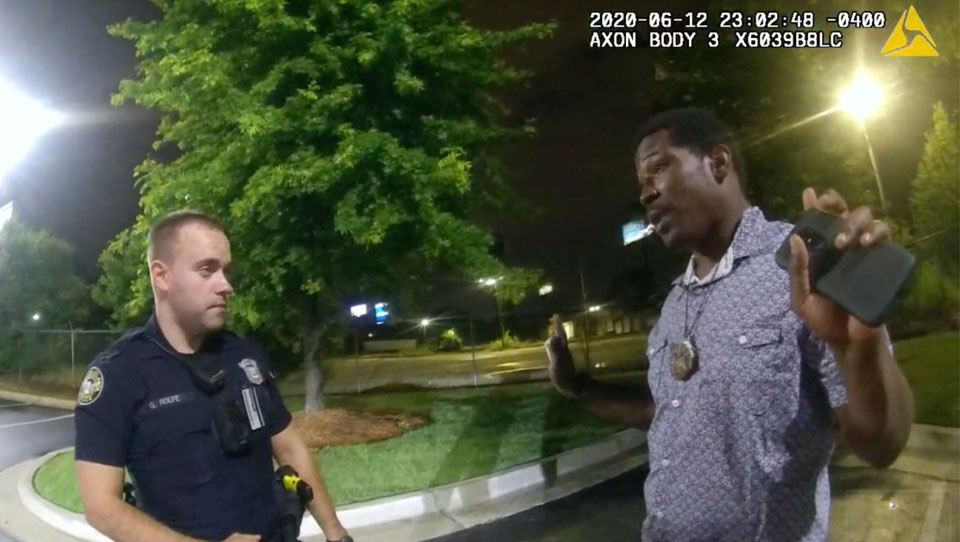 This screen grab taken from body camera video provided by the Atlanta Police Department shows Rayshard Brooks speaking with Officer Garrett Rolfe in the parking lot of a Wendy's restaurant, late Friday, June 12, 2020, in Atlanta. Rolfe has been fired following the fatal shooting of Brooks and a second officer has been placed on administrative duty. (Atlanta Police Department via AP)Garrett Rolfe, the officer who shot the 27-year-old Brooks on Friday night at a fast-food restaurant, was fired after the killing. Another officer, Devin Brosnan, was put on desk duty.

The shooting sparked new demonstrations in Georgia’s capital after the sometimes turbulent protests that erupted in Atlanta and across the U.S. in response to George Floyd’s death May 25 in Minneapolis under the knee of a White officer. The Wendy's where Brooks was shot was burned down after his killing. 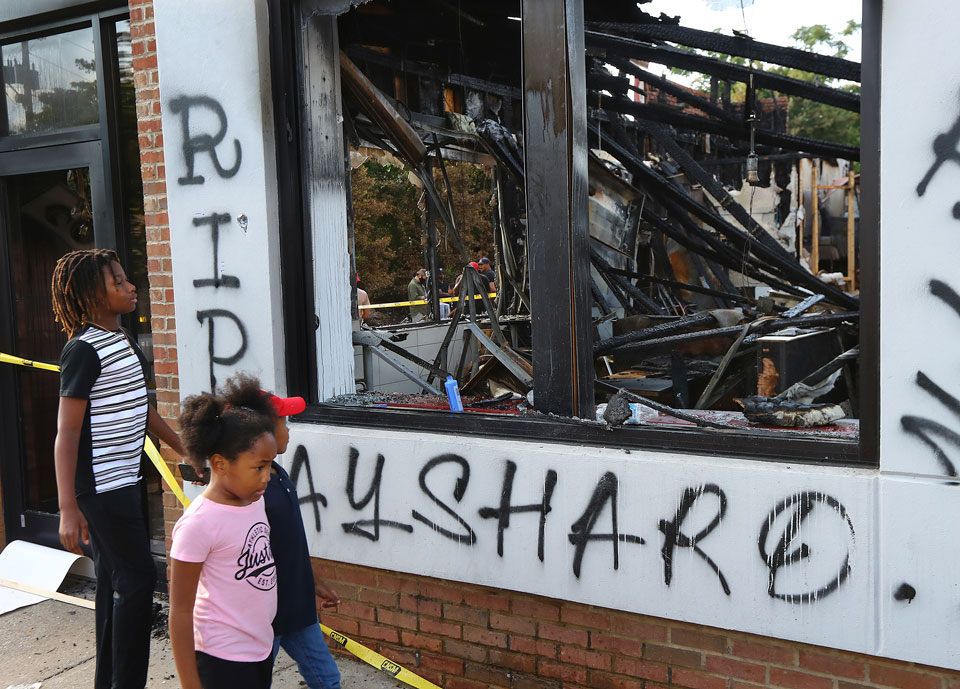 A crowd of demonstrators march to the Capitol Monday, June 15, 2020 in Atlanta. The NAACP March to the Capitol coincided with the restart of the Georgia 2020 General Assembly. Lawmakers returned wearing masks and followed new rules to restart the session during the pandemic. (Steve Schaefer/Atlanta Journal-Constitution via AP)Police were called to the restaurant over complaints of a car blocking the drive-thru lane. An officer found Brooks asleep behind the wheel of the car, and a breath test found he was intoxicated.

Video footage showed that when police went to handcuff him, Brooks wrestled with officers, snatched one of their stun guns and pointed it at one of them as he ran through the parking lot.

An autopsy found that Brooks was shot twice in the back.

Elsewhere, Senate Republicans in Washington announced the most ambitious GOP police-reform package in years, including an enhanced use-of-force database, restrictions on chokeholds and new commissions to study law enforcement and race.

The 106-page bill is not as sweeping as a Democratic proposal set for a House vote next week, but it shows how swiftly the national debate has been transformed since Floyd's death.

The Senate’s lone Black Republican, Tim Scott of South Carolina, led a task force of GOP senators in compiling the package and spoke of his own experiences being stopped by police.

“We hear you,” he said to the families of Americans killed by police. “We’re listening to your concerns.”

Meanwhile, Quaker Oats said it is getting rid of its Aunt Jemima brand because the character was “based on a racial stereotype.” And the owner of the Uncle Ben’s brand of rice said the brand will “evolve” in response to concerns about racial stereotyping.

While Aunt Jemima's image on packages was changed in recent years to make her look like a modern housewife, she was for most of her existence a stout, kerchief-wearing figure who evoked the plantation-era “Mammy” stereotype.

In the Minneapolis case, Derek Chauvin, the officer who put his knee on Floyd's neck for several minutes as he pleaded he couldn't breathe, has been charged with murder. Three other officers have been charged with aiding and abetting. All four were fired and could get up to 40 years in prison.

Matt Ott in New York and Lisa Mascaro and Jim Mustian in Washington contributed to this report.