Trump Accused as 'Inciter in Chief' of Capitol Insurrection 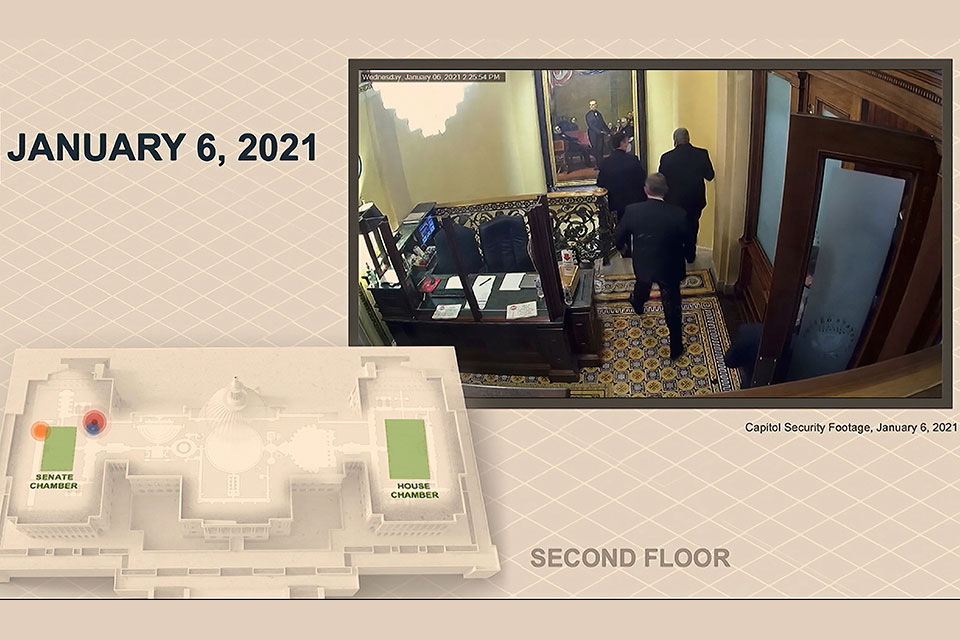 WASHINGTON (AP) — Prosecutors in Donald Trump’s impeachment trial said Wednesday they would prove that Trump was no “innocent bystander” but the “inciter in chief” of the deadly attack at the Capitol aimed at overturning his election loss to Joe Biden.

Opening the first full day of arguments, the lead House prosecutor said they promised to lay out evidence that shows the president encouraged a rally crowd to head to the Capitol, then did nothing to stem the violence and watched with “glee" as a mob stormed the iconic building. Five people died.

Senators, many with minds already made up, nevertheless sat riveted as jurors. They met in the same chamber the rioters stormed that day, battling through police barricades moments after the lawmakers had been rushed to a secret shelter. For the first time, the senators saw detailed security video of the break-in and heard grim emergency calls from Capitol police pleading for back-up as they were overwhelmed.

“To us it may have felt like chaos and madness, but there was method to the madness that day,” said Rep. Jamie Raskin, D-Md., the lead prosecutor, who pointed to Trump as the instigator.

“And when his mob overran and occupied the Senate and attacked the House and assaulted law enforcement, he watched it on TV like a reality show.

He reveled in it.”

The day's proceedings were unfolding after an emotional start to the trial that left the former president fuming Tuesday when his attorneys delivered a meandering defense and failed to halt the trial on constitutional grounds. Some allies called for yet another shakeup to his legal team.

Trump is the first president to face an impeachment trial after leaving office and the first to be twice impeached. The Jan. 6 Capitol riot followed a rally during which Trump urged his supporters to “fight like hell,” words his lawyers say were simply a figure of speech. He is charged with “incitement of insurrection” with fiery words his defense lawyers say are protected by the Constitution's First Amendment and just figures of speech. 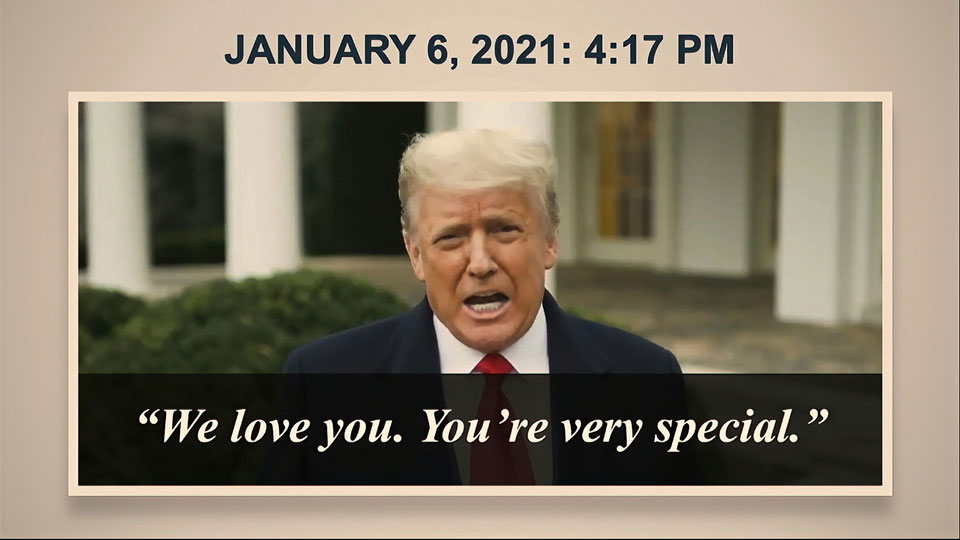 In this image from video, a video from Donald Trump is shown to senators as House impeachment manager Rep. Jamie Raskin, D-Md., speaks during the second impeachment trial of former President Donald Trump in the Senate at the U.S. Capitol in Washington, Wednesday, Feb. 10, 2021. (Senate Television via AP)The prosecutors are arguing that Trump’s words weren't just free speech but part of “the big lie” — his relentless efforts to sow doubts about the election results. Those began long before the votes were tabulated, revving up his followers to “stop the steal" though there was no evidence of substantial fraud. 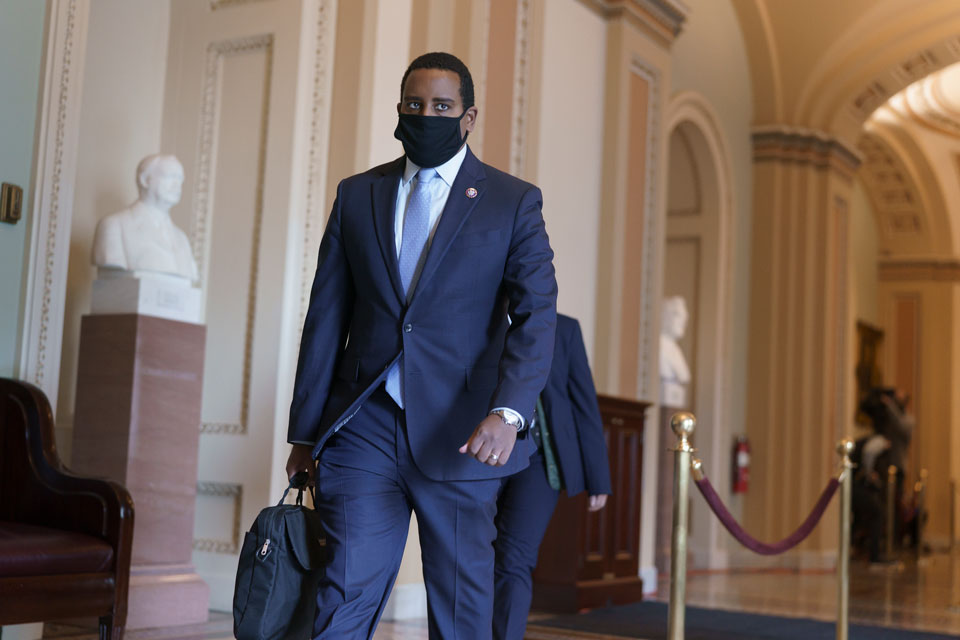 Rep. Joe Neguse, D-Colo., one of the Democratic House impeachment managers, arrives as opening arguments begin in former President Donald Trump's impeachment trial, at the Capitol in Washington, Wednesday, Feb. 10, 2021. (AP Photo/J. Scott Applewhite)Trump knew very well what would happen when he took to the microphone at the outdoor White House rally that day, almost to the hour that Congress gaveled in to certify Biden’s win, said Rep. Joe Neguse, D-Colo.

“This was not just a speech,” he said.

Trump’s supporters were prepped and armed, ready to descend on the Capitol, Neguse said.

“When they heard his speech, they understood his words.”

Security remained extremely tight Wednesday at the Capitol, fenced off with razor wire and patrolled by National Guard troops. 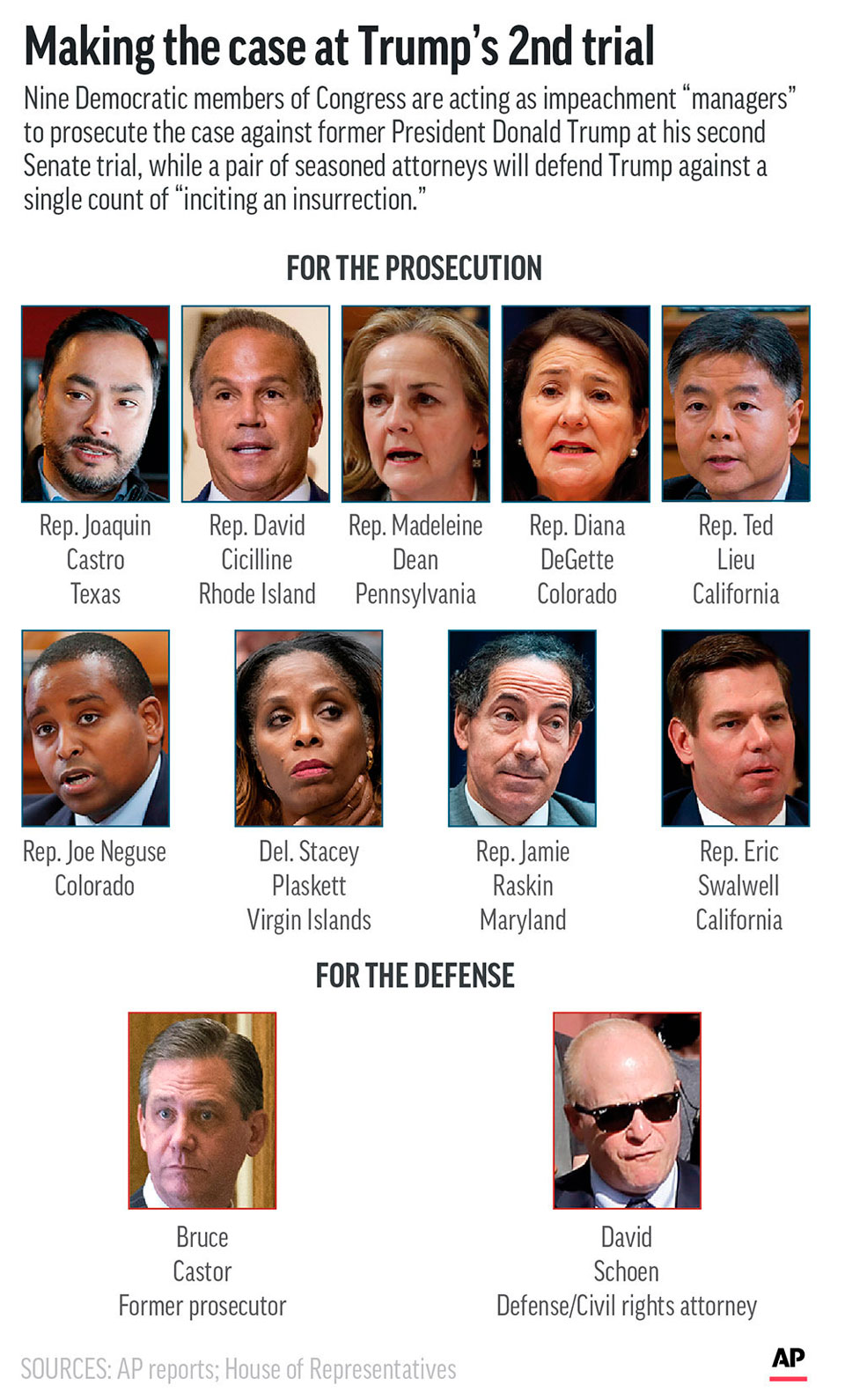 “Joe Biden is the president, he’s not a pundit, he’s not going to opine on back and forth arguments,” she said.

The difficulty facing Trump's defense team became apparent at the start as they leaned on the process of the trial, unlike any other, rather than the substance of the case against the former president.

As the House impeachment managers described police officers maimed in the chaos and rioters parading in the very chamber where the trial was being held, Trump’s team countered that the Constitution doesn’t allow impeachment at this late date.

Even though the Senate rejected that argument in Tuesday's vote to proceed to the trial, the legal issue could resonate with Senate Republicans eager to acquit Trump without being seen as condoning his behavior.

Defense lawyer Bruce Castor said Tuesday he shifted his planned approach after hearing the prosecutors’ emotional opening and instead spoke conversationally to the senators, saying Trump’s team would denounce the “repugnant” attack and “in the strongest possible way denounce the rioters.” He encouraged the senators to be “cool-headed” as they assessed the arguments.

Trump attorney Schoen turned the trial toward starkly partisan tones, arguing the Democrats were fueled by a “base hatred” of the former president.

A frustrated Trump on Tuesday revived his demands to focus on his unsupported claims of voter fraud, repeatedly telephoning former White House aide Peter Navarro, who told The Associated Press in an interview he agrees. He is calling on Trump to fire his legal team.

“If he doesn’t make a mid-course correction here, he’s going to lose this Super Bowl,” Navarro said, a reference to public opinion, not the unlikely possibility of conviction.

Republicans made it clear that they were unhappy with Trump’s defense, many of them saying they didn’t understand where it was going — particularly Castor’s opening.

While six Republicans joined with Democrats to vote to proceed with the trial, the 56-44 vote was far from the two-thirds threshold of 67 votes that would be needed for conviction.

Minds did not seem to be changing. Sen. Josh Hawley, R-Mo., a leader of the effort to challenge the Electoral College tally that day certifying the election, watched from the public gallery with a shrug. “Nothing new here, for me, at the end of the day,” he said during a break.

As the country numbs to the Trump era’s shattering of civic norms, the prosecutors sought to remind senators and the nation how extraordinary it was to have a sitting U.S. president working to discredit the election.

In hundreds of tweets, remarks and interviews as far back as spring and summer, Trump was spreading false claims about the election and refusing to commit to the peaceful transfer of power once it was over, they said.

As violence mounted in the states in the weeks and months before Trump supporters marched to the Capitol, he could have told loyalists to stand down. But he didn’t. 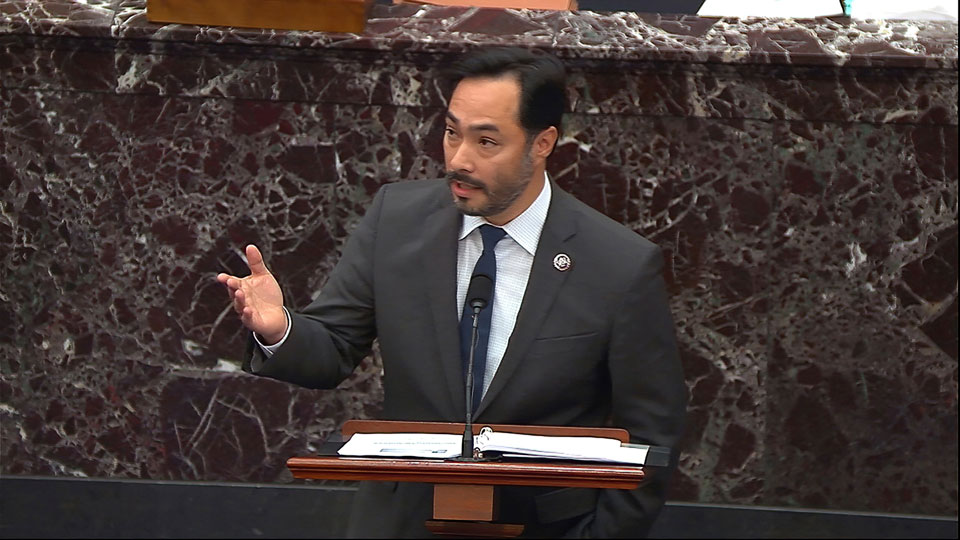 In this image from video, Rep. Joaquin Castro, D-Texas, speaks during the second impeachment trial of former President Donald Trump in the Senate at the U.S. Capitol in Washington, Wednesday, Feb. 10, 2021. (Senate Television via AP)The public scenes of attack were distilled in highly personal terms, first when Raskin broke down in tears Tuesday describing his family hiding in the Capitol that day. On Wednesday, Neguse, the son of immigrants, recalled telling his father how proud he was to return to Congress that night to finish the work of certifying the election. Castro said as a Democrat from Texas, he knew how hard it is to lose elections.

They also shared comments of the Capitol Police, including a Black officer who described racial epithets being hurled at him by the rioters.

“That’s the question before all of you in this trial, is this America?” Raskin told the senators.

It appears unlikely that the House prosecutors will call witnesses, and Trump has declined a request to testify. The trial is expected to continue into the weekend.

Trump's second impeachment trial is expected to diverge from the lengthy, complicated affair of a year ago. In that case, Trump was charged with having privately pressured Ukraine to dig up dirt on Biden, then a Democratic rival for the presidency. It could be over in half the time.

The Democratic-led House impeached the president swiftly, one week after the attack. A Capitol police officer was among those who died.