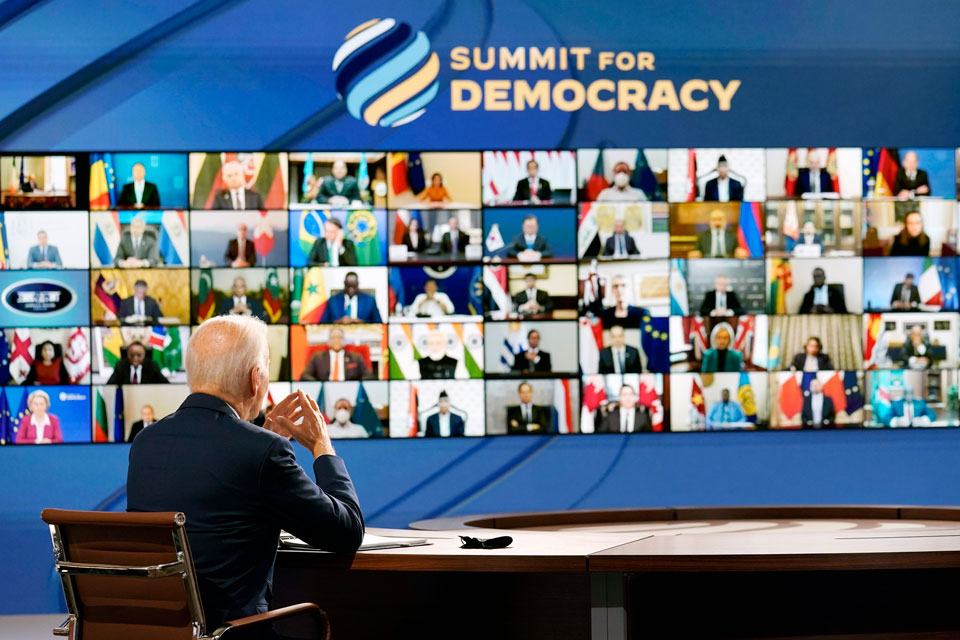 WASHINGTON (AP) — President Joe Biden on Thursday opened the first White House Summit for Democracy by sounding an alarm about a global slide for democratic institutions and called for world leaders to “lock arms” and demonstrate democracies can deliver.

Biden called it a critical moment for fellow leaders to redouble their efforts to bolster democracies. In making the case for action, he noted his own battle to win passage of voting rights legislation at home and alluded to challenges to America's democratic institutions and traditions.

“This is an urgent matter," Biden said in remarks to open the two-day virtual summit.

“The data we’re seeing is largely pointing in the wrong direction.”

The video gathering comes as Biden has repeatedly made a case that the U.S. and like-minded allies need to show the world that democracies are a far better vehicle for societies than autocracies.

That is a central tenet of Biden's foreign policy outlook — one that he vowed would be more outward looking than his predecessor Donald Trump's “America First" approach. Biden in his speech announced plans to launch an initiative that would spend up to $424 million for programming around the world that supports independent media, anti-corruption work and more.

Some countries not invited

But the gathering also drew backlash from the United States’ chief adversaries and other nations that were not invited to participate.

Ahead of the summit, the ambassadors to the U.S. from China and Russia wrote a joint essay describing the Biden administration as exhibiting a “Cold-War mentality” that will “stoke up ideological confrontation and a rift in the world.” The administration has also faced scrutiny over how it went about deciding which countries to invite. China and Russia were among those not receiving invitations.

After Biden's opening remarks, other leaders took turns delivering their own remarks on the state of democracy — many prerecorded — often reflecting on the stress that rapidly evolving technology is having on their nations. They also bemoaned the increase of disinformation campaigns aimed at and undermining institutions and elections.

“The democratic conversation is changing,” said Denmark's Prime Minister Mette Frederiksen. “New technologies and large tech companies are increasingly setting the stage for the democratic dialogue, sometimes with more emphasis on reach than on freedom of speech.”

The summit comes as Biden is pressing Russia's Vladimir Putin to stand down after a massive buildup of troops on the Ukraine border, creating growing concern in Washington and European capitals that Russia may look to once again invade Ukraine. Biden on Wednesday said that he warned Putin in a video call this week of “severe consequences” if Russia invaded.

Poland's Andrzej Duda also spoke out against Russia in his address, decrying Moscow and its support of Belarus. Poland and Western allies have accused Belarus President Alexander Lukashenko of using migrants as pawns to destabilize the 27-nation European Union in retaliation for its sanctions on his authoritarian regime. Hundreds of migrants, mostly from the Middle East, last month flocked to the Belarus-Poland border. Most were fleeing conflict or despair at home and were looking to reach Germany or other Western European countries.

Poland “took on a commitment to be a support for democracy in Eastern Europe,” Duda said.

“It is a beautiful task, but it has its consequences.

"It has made us the target of the Kremlin propaganda.”

Democracy 'backsliding' in the U.S.

The U.S. may be at its own pivot point. 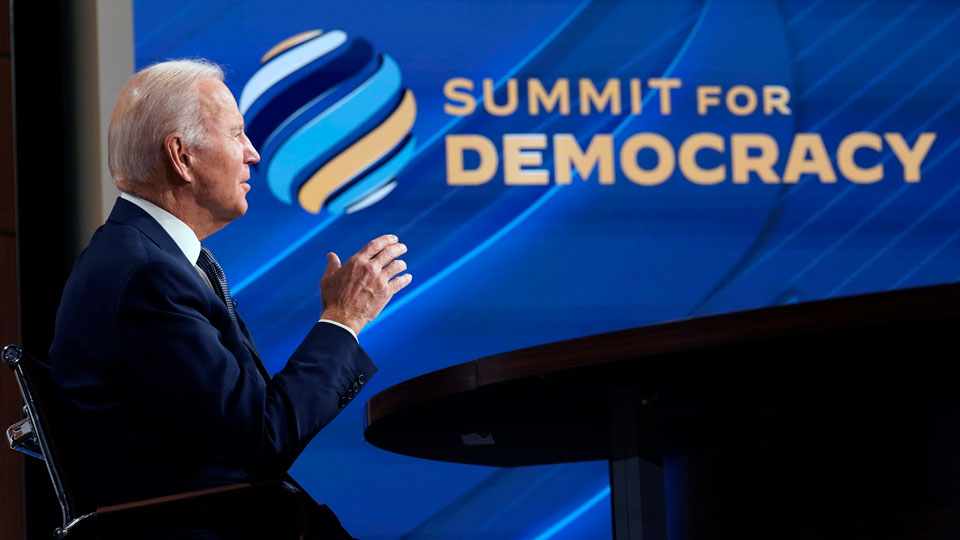 President Joe Biden speaks from the South Court Auditorium on the White House complex in Washington, Thursday, Dec. 9, 2021, for the opening of the Democracy Summit.The two-day virtual summit is billed as an opportunity for leaders and civil society experts from some 110 countries to collaborate on fighting corruption and promoting respect for human rights. (AP Photo/Susan Walsh)Local elected officials are resigning at an alarming rate amid confrontations with angry voices at school board meetings, elections offices and town halls. States are passing laws to limit access to the ballot, making it more difficult for Americans to vote. And the Jan. 6 attack at the Capitol has left many in Donald Trump's Republican party clinging to his false claims of a stolen election, eroding trust in the accuracy of the vote.

Biden has said passage of his ambitious domestic agenda — the $1 trillion bipartisan infrastructure bill he signed into law, as well as the roughly $2 trillion “Build Back Better Act” of social and climate change initiatives moving through the Senate — will demonstrate how democracy can improve people’s lives.

Some advocates also want Biden to focus on other ways to shore up democracy at home. One early test was coming Thursday as the House moves to approve the Protecting Our Democracy Act, the third in a trio of bills — alongside the Freedom to Vote Act and the John Lewis Voting Rights Act — largely backed by Democrats but stalled by Republicans in the Senate.

“The United States has a thriving democracy, but it’s been hurting in recent years,” said Michael Abramowitz, the president of Freedom House, whose annual report marked a 15th consecutive year of a global democratic slide. “Right now, we’re going through a phase in America where it’s very difficult to get things done and to really prove that democracy can deliver."

The International Institute for Democracy and Electoral Assistance, said in its annual report that the number of countries experiencing democratic backsliding “has never been as high” as the past decade, with the U.S. added to the list alongside India and Brazil.

Chinese officials have offered a stream of public criticism about the summit. They have also expressed outrage over the administration inviting Taiwan to take part. China claims the self-governing island as part of its territory and objects to it having contacts on its own with foreign governments.

Pakistan’s Prime Minister Imran Khan declined to attend the conference. In a statement issued ahead of the meeting, the foreign ministry said, "We value our partnership with the U.S. which we wish to expand both bilaterally as well as in terms of regional and international cooperation.”

Pakistan is seen as moving increasingly closer to China, but in a televised speech Khan said Islamabad has no interest in joining any bloc and he offered to help smooth relations between Beijing and Washington.

Yet Pakistan’s own relationship with the U.S. has been fraught with suspicion on both sides. Islamabad has balked at Washington’s often-stated criticism that Pakistan has not been a reliable partner in the war on terror, accusing it of harboring the Taliban even as they fought the U.S.-led coalition. Pakistan says it has lost 70,000 people to the war on terror since 2001 and is ready to be a partner in peace but not in war.

Other uninvited countries have shown their displeasure. Hungary, the only European Union member not invited, tried unsuccessfully to block EU Commission President Ursula von der Leyen from speaking on behalf of the bloc at the summit. During the 2020 campaign, Biden referred to Hungarian Prime Minister Viktor Orban as a “thug.”

Hungarian Foreign Minister Peter Szijjarto dismissed the summit as a “domestic political-type of event” where countries whose leaders had a good relationship with Trump were not invited.

Turkey, a fellow NATO member, and Egypt, a key U.S. ally in the Middle East, were also left off. Iraq was the sole Arab nation invited. The Biden administration has raised human rights concerns about both Turkey and Egypt. However, Poland, which has faced criticism for undermining the independence of its judiciary and media, was invited.