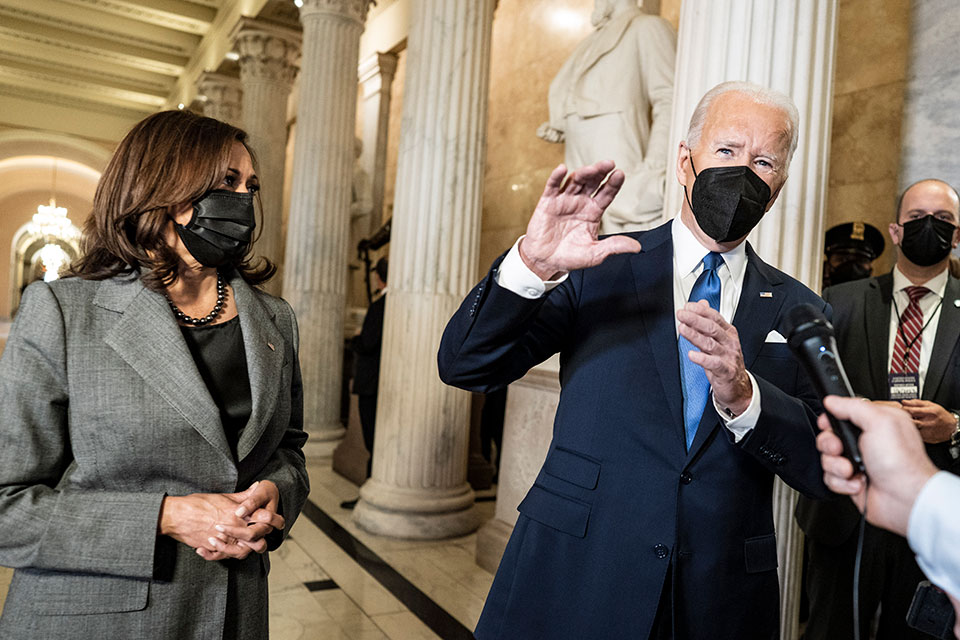 On the anniversary of the deadly January 6 attack on the U.S. Capitol, President Joe Biden doubled down on his campaign slogan from the 2020 election. He declared the race against former President Donald Trump as a “battle for the soul of our nation.”

“Don’t kid yourself. The pain and scars from that day run deep,” the President said during a morning address from the U.S. Capitol.

“We are in a battle for the soul of America.

"A battle that by the grace of God, the goodness and gracious, greatness of this nation we will win.” 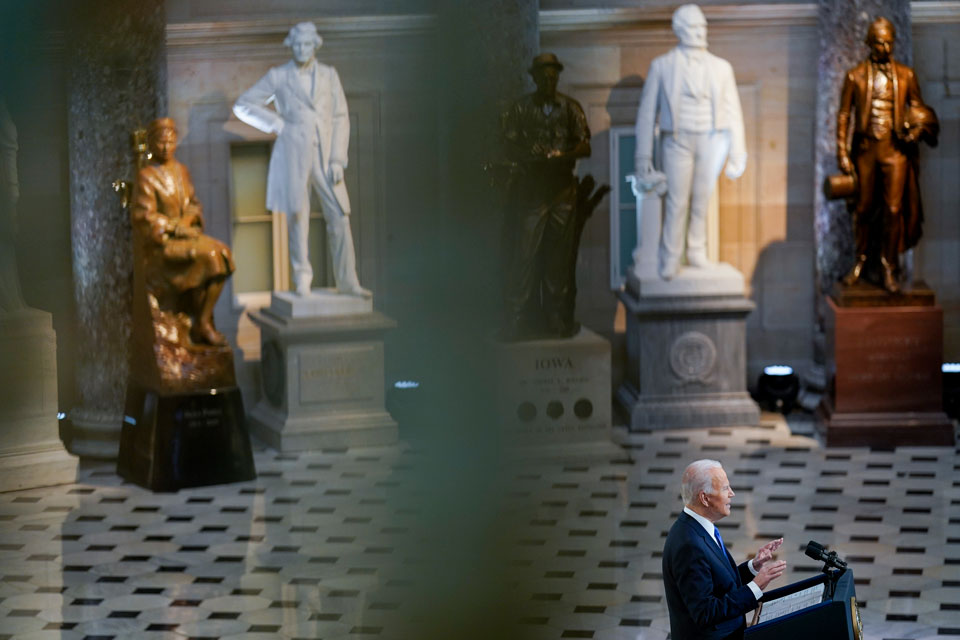 President Joe Biden speaks from Statuary Hall at the U.S. Capitol to mark the one year anniversary of the Jan. 6 riot at the Capitol by supporters loyal to then-President Donald Trump, Thursday, Jan. 6, 2022, in Washington. (Jabin Botsford//The Washington Post via AP, Pool)In his most passionate and direct blitz against Trump, President Biden accused the former President of orchestrating the deadly attack that left five officers dead in its wake.

Four other police officers who responded to the insurrection later committed suicide.

“[Trump] and his allies placed a dagger at the throat of American democracy,” President Biden demanded.

“For the first time in our history, a President not just lost an election, he tried to prevent the peaceful transfer of power as a violent mob breached the Capitol.”

“[Trump] did nothing for hours as police were assaulted, lives were at risk, the nation’s Capitol under siege,” President Biden asserted. 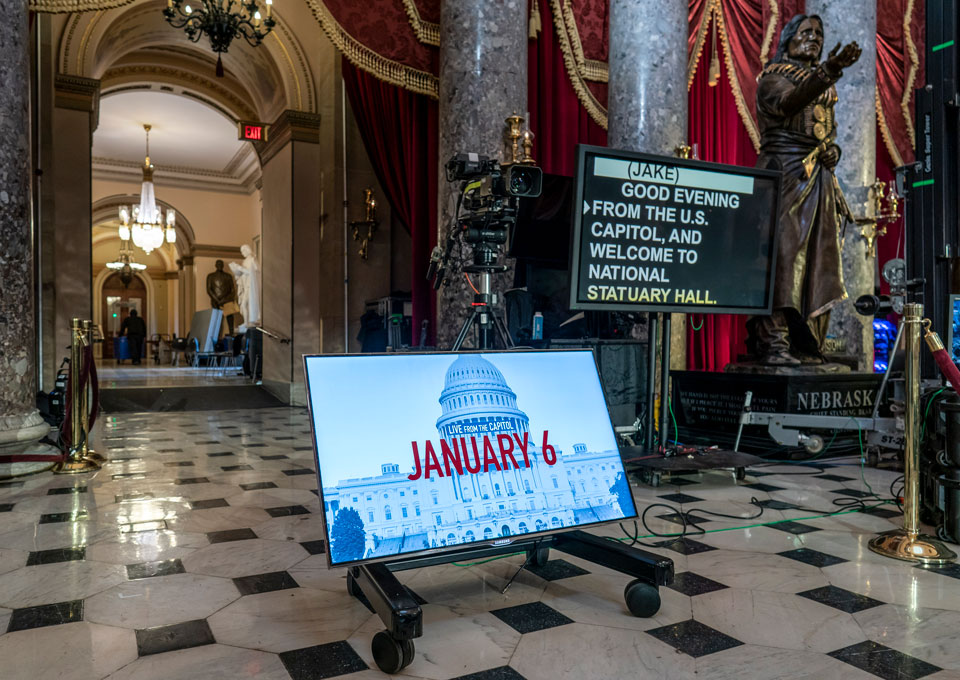 A year after the Jan. 6 attack on the Capitol, television cameras and video monitors fill Statuary Hall in preparation for news coverage, on Capitol Hill in Washington, Wednesday, Jan. 5, 2022. President Joe Biden is prepared to mark the first anniversary of the Capitol insurrection Thursday, gathering with lawmakers to remember the violent attack that has fundamentally changed the Congress and raised global concerns about the future of American democracy. (AP Photo/J. Scott Applewhite)The President did not use Trump’s name throughout his speech, only referring to him by title and gender.

In the aftermath of the attack that disrupted a joint session of the U.S. Congress in the process of affirming the presidential election results, the government has continued its investigation.

According to a May 2021 estimate by the Architect of the Capitol, the attack caused approximately $1.5 million worth of damage to the U.S. Capitol building. The Department of Justice insists that it remains resolved to hold accountable those who committed crimes on January 6, 2021.

There have been more than 725 arrests in nearly all 50 states and the District of Columbia.

According to the Department of Justice, more than 225 people faced charges with assaulting, resisting, or impeding officers or employees, including over 75 individuals charged with using a deadly or dangerous weapon or causing serious bodily injury to an officer. 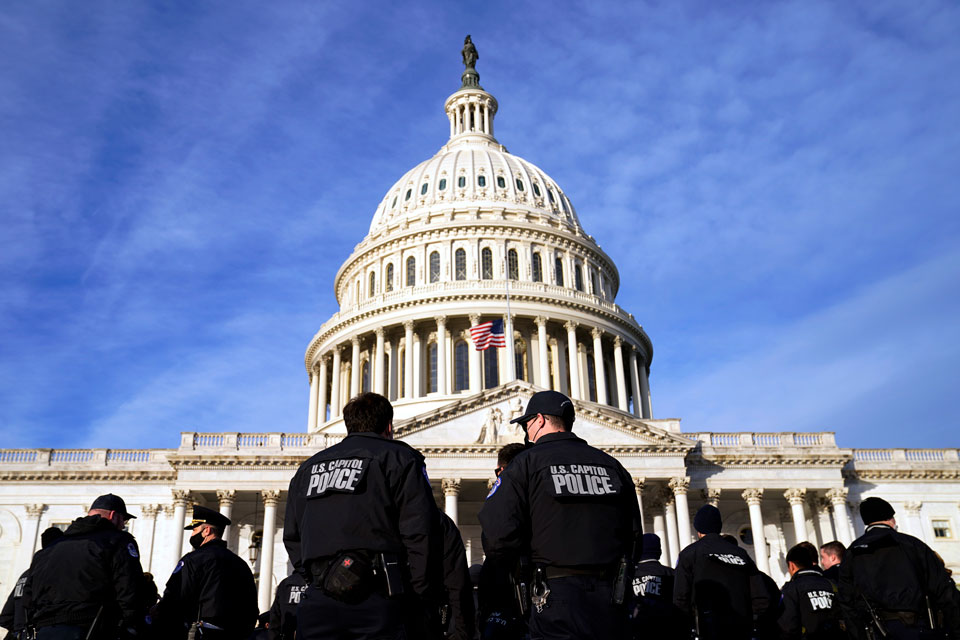 A large group of police arrive at the Capitol, Thursday, Jan. 6, 2022, in Washington. President Joe Biden and members of Congress are solemnly marking the first anniversary of the Jan. 6 U.S. Capitol insurrection. Lawmakers are holding events Thursday to reflect on the violent attack by supporters of then-President Donald Trump. The ceremonies will be widely attended by Democrats, but almost every Republican on Capitol Hill will be absent. (AP Photo/Evan Vucci)Rioters assaulted approximately 140 police officers in the attack, including about 80 U.S. Capitol Police and 60 from the Metropolitan Police Department.

Also, authorities arrested ten individuals on a series of charges related to assaulting a member of the media or destroying their equipment. Vice President Kamala Harris also addressed the attacks on the solemn anniversary.

She spoke of her experience on that day.

“My staff were converting filing cabinets into barricades after we were evacuated from chambers,” Vice President Harris noted, adding that she could emphasize how the fragility and strength of democracy were represented on January 6, “The fragility of our democracy is this: if we are not vigilant, if we do not defend it, democracy simply will not stand,” the vice president said.

“It will falter, and it will fail.”

She also compared the attack to Pearl Harbor.

“Certain dates echo throughout history, including dates that instantly remind all who have lived through them where they were and what they were doing when our democracy came under assault,” Harris said. “Dates that occupy not only a place on our calendars, but a place in our collective memory: December 7, 1941, September 11, 2001, and January 6, 2021.”

“The way you have to heal, you have to recognize the extent of the wound. This is serious stuff… You’ve gotta face it. That’s what great nations do. They face the truth, deal with it, and move on,” he said.