Minority Women Most Affected if Abortion Is Banned, Limited 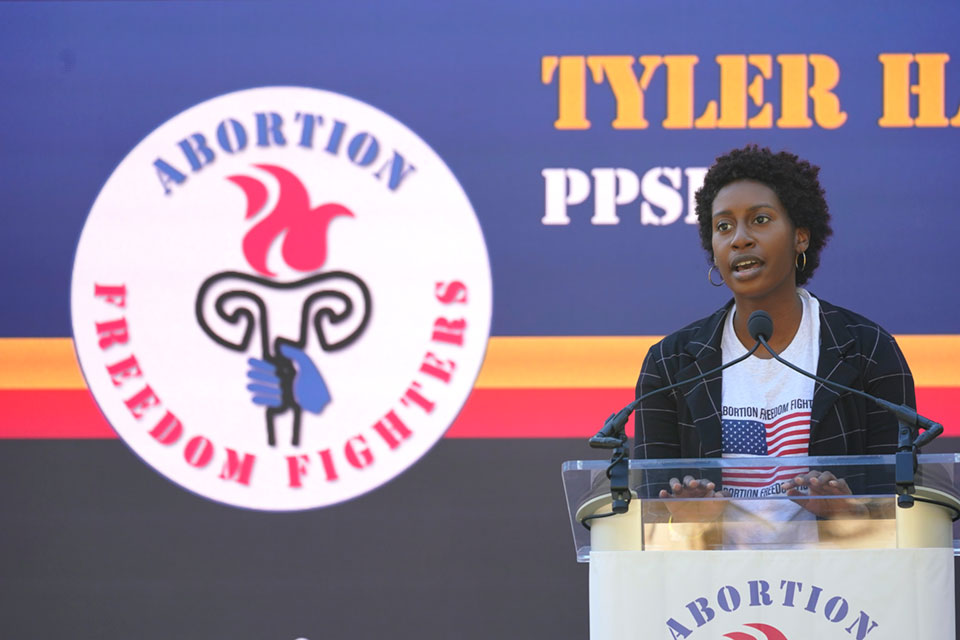 JACKSON, Miss. (AP) — If you are Black or Hispanic in a conservative state that already limits access to abortions, you are far more likely than a white woman to have one.

And if the U.S. Supreme Court allows states to further restrict or even ban abortions, minority women will bear the brunt of it, according to statistics analyzed by The Associated Press.

The numbers are unambiguous. In Mississippi, people of color comprise 44% of the population but 80% of women receiving abortions, according to the Kaiser Family Foundation, which tracks health statistics.

Why the great disparities?

If abortions are outlawed, those same women — often poor — will likely have the hardest time traveling to distant parts of the country to terminate pregnancies or raising children they might struggle to afford, said Roberts, who is Black and once volunteered at Mississippi’s only abortion clinic.

“We’re talking about folks who are already marginalized,” Roberts said. 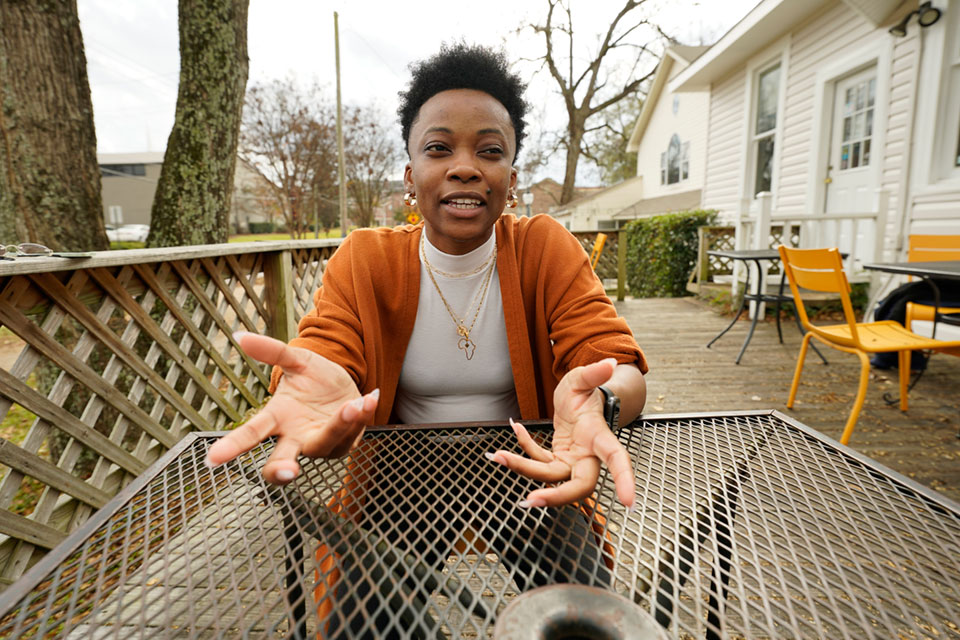 Amanda Furdge talks about the contrast of easily finding abortion services when she lived in Illinois and the difficulty of finding the services after she moved back to Mississippi, which has only one abortion clinic, during an interview in Clinton, Miss., on Dec. 10, 2021. (AP Photo/Rogelio V. Solis)

Amanda Furdge, who is Black, was one of those women. She was a single, unemployed college student already raising one baby in 2014 when she found out she was pregnant with another. She said she didn’t know how she could afford another child.

She’d had two abortions in Chicago. Getting access to an abortion provider there was no problem, Furdge said. But now she was in Mississippi, having moved home to escape an abusive relationship. Misled by advertising, she first went to a crisis pregnancy center which tried to talk her out of an abortion. By the time she found the abortion clinic, she was too far along to have the procedure.

“Why can’t you safely, easily access abortion here?” asked Furdge, 34, who is happily raising her now 7-year-old son but continues to advocate for women having the right to choose.

Aware of the ramifications

Torres said historically, anti-abortion laws have been crafted in ways that hurt low-income women. She pointed to the Hyde Amendment, a 1980 law that prevents the use of federal funds to pay for abortions except in rare cases.

She also cited the 2021 Texas law that bans abortion after around six weeks of pregnancy. Where she lives, near the U.S.-Mexico border in the Rio Grande Valley, women are forced to travel to obtain abortions and must pass in-state border patrol checkpoints where they have to disclose their citizenship status, she said.

Regardless of what legislators say, Torres insisted, the intent is to target women of color, to control their bodies: “They know who these restrictions are going to affect. They know that, but they don’t care.”

But Andy Gipson, a former member of the Mississippi Legislature who is now the state’s agriculture and commerce commissioner, said race had nothing to do with passage of Mississippi’s law against abortion after the 15th week. That law is now before the Supreme Court in a direct challenge to Roe v. Wade, the court's 1973 ruling that legalized abortion nationwide.

Gipson, a Baptist minister who is white, said he believes all people are created in the image of God and have an “innate value” that starts at conception. Mississippi legislators were trying to protect women and babies by putting limits on abortion, he said.

“I absolutely disagree with the concept that it’s racist or about anything other than saving babies’ lives,” said Gipson, a Republican. “It’s about saving lives of the unborn and the lives and health of the mother, regardless of what color they are.”

To those who say that forcing women to have babies will subject them to hardships, Mississippi Attorney General Lynn Fitch, a white Republican, said it is “easier for working mothers to balance professional success and family life” than it was 49 years ago when Roe was decided.

Fitch, who is divorced, often points to her own experience of working outside the home while raising three children. But Fitch grew up in an affluent family and has worked in the legal profession — both factors that can give working women the means and the flexibility to get help raising children.

That’s not the case for many minority women in Mississippi or elsewhere. Advocates say in many places where abortion services are being curtailed, there’s little support for women who carry a baby to term.

Mississippi is one of the poorest states, and people in low-wage jobs often don’t receive health insurance. Women can enroll in Medicaid during pregnancy, but that coverage disappears soon after they give birth.

Mississippi has the highest infant mortality rate in the U.S., according to the Centers for Disease Control and Prevention. Black infants were about twice as likely as white infants to die during the first year of life in Mississippi, according to the March of Dimes.

Across the country, U.S. Census Bureau information analyzed by The Associated Press shows fewer Black and Hispanic women have health insurance, especially in states with tight abortion restrictions. For example, in Texas, Mississippi and Georgia, at least 16% of Black women and 36% of Latinas were uninsured in 2019, some of the highest such rates in the country.

Problems are compounded in states without effective education programs about reproduction. Mississippi law says sex education in public schools must emphasize abstinence to avoid pregnancy and sexually transmitted diseases. Discussion of abortion is forbidden, and instructors may not demonstrate how to use condoms or other contraception.

The Mississippi director for Planned Parenthood Southeast, Tyler Harden, is a 26-year-old Black woman who had an abortion five years ago, an experience that drove her to a career supporting pregnant women and preserving abortion rights.

She said when she was attending public school in rural Mississippi, she didn’t learn about birth control. Instead, a teacher stuck clear tape on students’ arms. The girls were told to put it on another classmate’s arm, and another, and watch how it lost the ability to form a bond.

“They’d tell you, ‘If you have sex, this is who you are now: You’re just like this piece of tape — all used up and washed up and nobody would want it,’” Harden said.

When she became pregnant at 21, she knew she wanted an abortion. Her mother was battling cancer and Harden was in her last semester of college without a job or a place to live after graduation.

She said she was made to feel fear and shame, just as she had during sex ed classes. When she went to the clinic, she said protesters told her she was “‘killing the most precious gift’” from God and that she was ”‘killing a Black baby, playing into what white supremacists want.’”

Harden’s experience is not uncommon. The anti-abortion movement has often portrayed the abortion fight in racial terms.

Outside the only abortion clinic operating in Mississippi, protesters hand out brochures that refer to abortion as Black “genocide” and say the late Margaret Sanger, founder of Planned Parenthood and a proponent of eugenics, “desired to eradicate minorities.” The brochures compare Sanger to Adolf Hitler and proclaim: “Black lives did not matter to Margaret Sanger!”

White people are not alone in making this argument. Alveda King, an evangelist who is a niece of the Rev. Martin Luther King Jr., is among the Black opponents of abortion who, for years, have been portraying abortion as a way to wipe out people of their race. 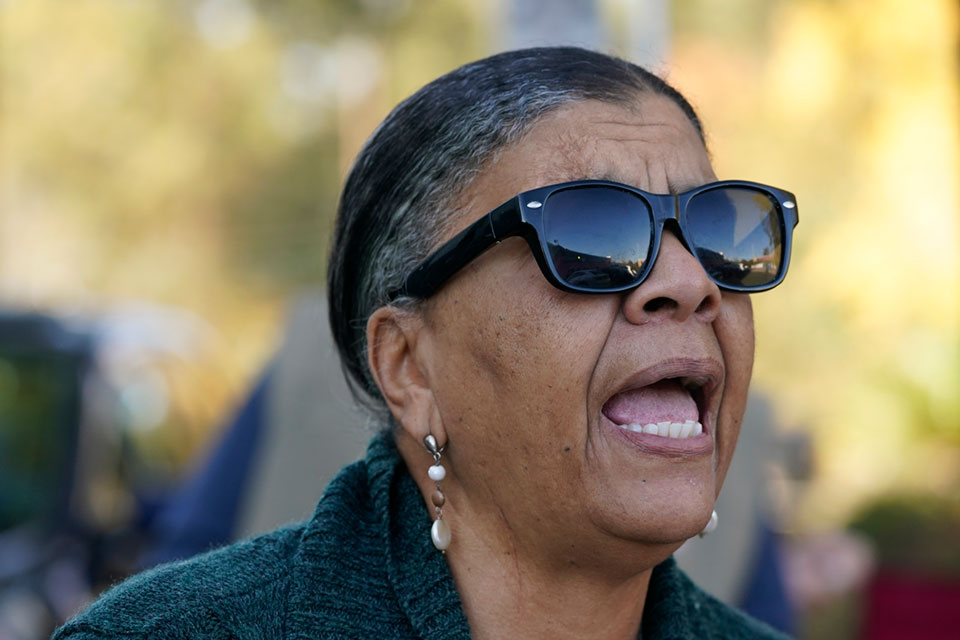 Tanya Britton, a former president of Pro-Life Mississippi, calls out through a barrier around Mississippi's only abortion clinic on Nov. 30, 2021, in Jackson, Miss. Britton often travels from her home in Tupelo, Miss., to pray outside the clinic and to try to persuade women not to go inside to end their pregnancies. Britton says it's a tragedy that the number of Black babies aborted since the Supreme Court's 1973 Roe v. Wade decision would equal the population of several large cities. She also says people are too casual about terminating pregnancies. (AP Photo/Rogelio V. Solis)

Tanya Britton, a former president of Pro-Life Mississippi, often drives three hours from her home in the northern part of the state to pray outside the abortion clinic in Jackson. Britton is Black, and she said it’s a tragedy that the number of Black babies aborted since Roe would equal the population of several large cities. She also said people are too casual about terminating pregnancies.

“You just can’t take the life of someone because this is not convenient — ‘I want to finish my education,’” Britton said. “You wouldn’t kill your 2-year-old because you were in graduate school.”

But state Rep. Zakiya Summers of Jackson, who is Black and a mother, suggested there’s nothing casual about what poor women are doing. Receiving little support in Mississippi — for example, the Legislature killed a proposal to expand postpartum Medicaid coverage in 2021 -- they are sometimes forced to make hard decisions.

“Women are just out here trying to survive, you know?”

she said. “And Mississippi doesn’t make it any easier.”