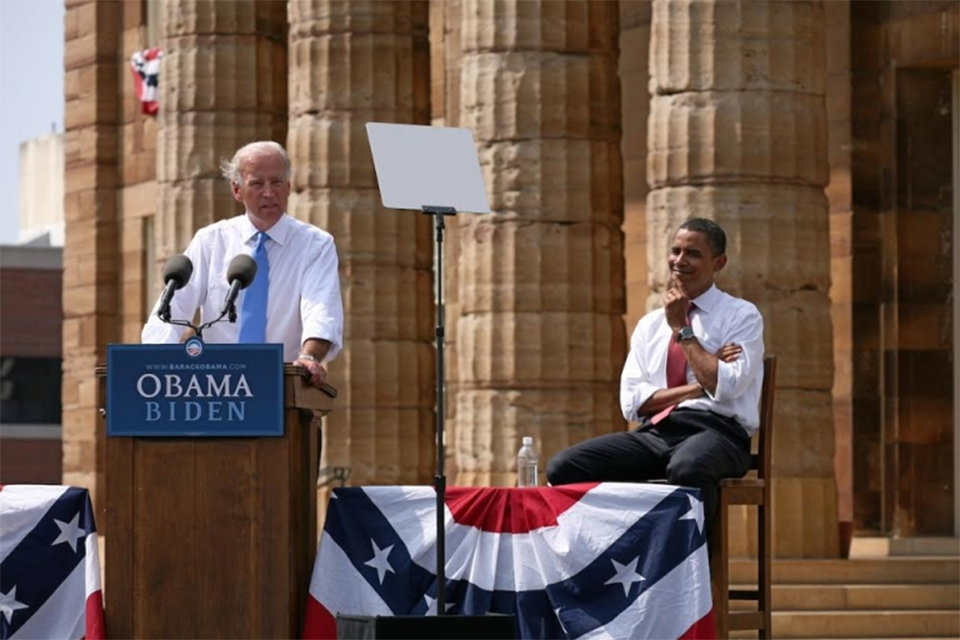 With the style, grace, and humor that personified his two terms in office, former President Barack Obama returned to the White House to help celebrate the Affordable Care Act and help announce plans to strengthen his signature law which many refer to as Obamacare.

“It’s good to be back at the White House,” Obama declared, much to the delight of an overflow crowd of reporters and onlookers in the East Room.

With President Joe Biden and Vice President Kamala Harris standing alongside him, Obama referred to the current commander-in-chief as “Vice President Biden.”

That brought laughter from all, including Biden, who would later jokingly declare, “My name is Joe Biden, and I’m Barack Obama’s vice president.”

“It feels like the good old days – being here with you brings back so many good memories,” Biden declared.

It marked the first time Obama had visited 1600 Pennsylvania Avenue since leaving office.

“I confess, I heard some changes have been made by the current president since I was last here,” Obama remarked.

“Apparently, Secret Service agents have to wear Aviator glasses now. The Navy mess has been replaced by a Baskin-Robbins. And there’s a cat running around, which I guarantee Beau and Sunny would have been very unhappy about,” he continued, in reference to the president’s dogs.

“It’s an example of why you run for office in the first place,” Obama asserted.

“We’re not supposed to do this just to occupy a seat or to hang on to power."

" We’re supposed to do this because it’s making a difference in the lives of the people who sent us here.”

Biden said the Affordable Care Act had been called a lot of things.“But Obamacare is the most fitting,” he declared.

The President vowed to expand access to health care by proposing a change to Obamacare that would allow more eligibility for premium tax credits.

“Once today’s proposed rule is finalized, starting next year, working families in America will get the help they need to afford full family coverage,” Biden said.“With this change, it’s estimated that 200,000 presently uninsured Americans are going to gain coverage. Nearly one million Americans will see their coverage become more affordable.”

Under the President’s plan, families would receive tax credits if the cost of their coverage exceeds more than 10 percent of their incomes.

The U.S. Treasury Department said the change would allow 200,000 uninsured individuals to gain coverage while more than 1 million others would realize lower premium payments.

“Thanks to the landmark American Rescue Plan, ACA premiums are at an all-time low, while enrollment is at an all-time high,” the administration said in a Fact Sheet.

“Four out of five Americans can find quality coverage for under $10 a month, and families are saving an average of $2,400 on their annual premiums — $200 in savings every month back to families.”

“The Administration has lowered costs and increased enrollment to a record high of 14.5 million Americans—including nearly 6 million who newly gained coverage.

“With the addition of Missouri and Oklahoma, two states that expanded Medicaid last year, nearly 19 million low-income Americans are enrolled in the ACA’s Medicaid expansion coverage, adding up to a record nearly 80 million children, pregnant women, seniors, people with disabilities, and other low-income Americans covered by Medicaid.”

The administration said it’s seeking to fix the “family glitch” in the ACA law.

“Under the ACA, people who do not have access to ‘affordable’ health insurance through their jobs may qualify for a premium tax credit to purchase affordable, high-quality coverage on the ACA’s health insurance marketplaces,” administration officials stated.

“Current regulations define employer-based health insurance as ‘affordable’ if the coverage solely for the employee, and not for family members, is affordable, making family members ineligible for a premium tax credit even though they need it to afford high-quality coverage through the Marketplace.”

The officials added that for family members of an employee offered health coverage through an employer, the cost of that family coverage can sometimes be prohibitive and make health insurance out of reach.

The “family glitch” affects about 5 million people and has made it impossible for many families to use the premium tax credit to purchase an affordable, high-quality Marketplace plan, officials stated.

Biden’s proposal reportedly would require some time before taking effect. Thus the goal is for it to begin in January.

That number included 6 million who purchased health insurance for the first time.