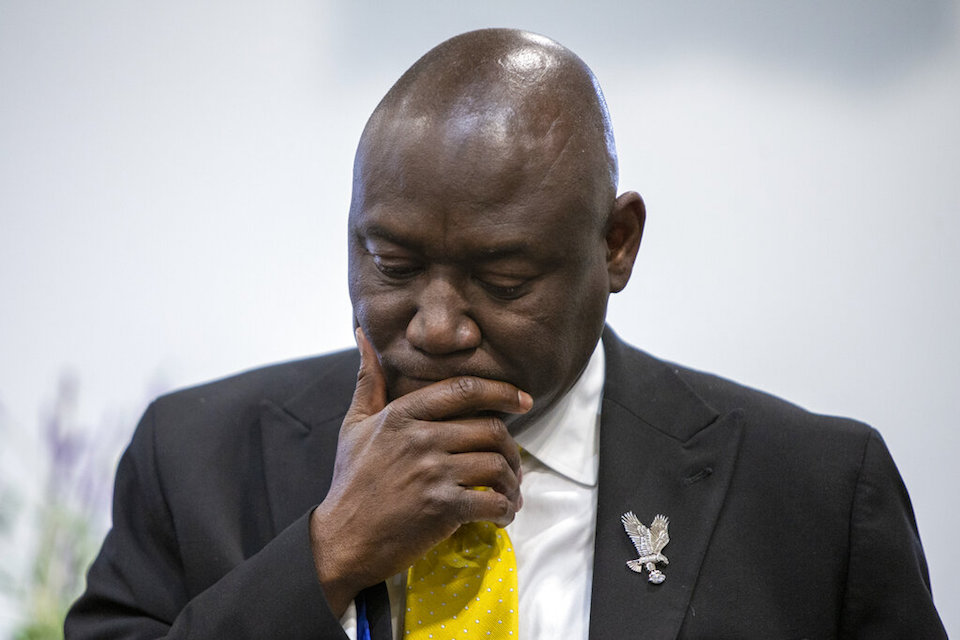 DETROIT (AP) — The fatal shooting of Patrick Lyoya in Michigan raises questions about why a traffic stop turned into a foot chase and vigorous tussle before the motorist was killed by a police officer while facing the ground.

Lyoya, a 26-year-old Black man, was shot in the head in Grand Rapids, Michigan, on April 4. The city's new police chief took the unusual step of releasing videos of the violent confrontation over objections of the prosecutor, who will ultimately decide whether the white officer should be charged.

“It is an unjustifiable use of deadly force because the police escalated a traffic stop into an execution," said Benjamin Crump, an attorney for Lyoya's family.

State police are handling the investigation. Here's a look at key considerations:

Video showed Lyoya emerging from a car and refusing the officer's command to get back inside, then briefly running away in the residential neighborhood. The officer is heard saying he stopped the car because the license plate didn't match the vehicle.

The pair wrestled as the officer repeatedly demanded that Lyoya give up. Before shooting Lyoya on the ground, the officer loudly claimed that the man had possession of his police Taser.

“Beyond the videos, I think the biggest factors will be the condition of the Taser and what, if anything, the motorist was trying to do with it,” said Seth Stoughton, a professor at University of South Carolina School of Law and expert on the use of force.

He testified for prosecutors at the murder trial of Derek Chauvin, the Minneapolis officer who was convicted of killing George Floyd.

“If the Taser only held the cartridge that had already been discharged, that means it could only be used to ‘drive stun,’ which hurts but doesn’t have any real risk of incapacitating an officer. ... Whether the Taser could realistically be used to disable the officer is hugely important,” Stoughton said.

Pursuits on foot can be dangerous, and in recent years more police departments have adopted chase policies. Grand Rapids does not have one, but it's “something that is addressed in training,” spokeswoman Jennifer Kalczuk said.

David Carter, a criminal justice professor at Michigan State University and former police officer, said he could sense fear, frustration and exhaustion in the officer's voice on the videos, three things that could have affected his decisions.

“There were times when he could have just let him go,” said Carter, who noted that lowering the heat during conflicts involving police is preferred. “Unless we know specifically that this person poses a threat to public safety, we’ll get him later.”

But Richard Convertino, a Detroit-area defense lawyer who has represented police officers, said pursuing people is a cop's job.

“What if he turned out to be a fugitive? Then you’d be questioned with, ‘Why didn’t you chase him?'” Convertino said. “A person not complying directly with something as routine as a traffic stop could indicate something is very wrong. Combativeness is very unusual.”

WHAT DID THE OFFICER BELIEVE?

An officer's state of mind is a key factor for a prosecutor and a jury.

“If the prosecutor concludes that the officer reasonably — but mistakenly — thought that (Lyoya) presented an imminent threat of death or great bodily harm when, in fact, he did not, they may be limited or precluded from bringing certain charges,” Stoughton said.

In 2019, Convertino argued that a Michigan trooper feared for his safety when he fired a Taser from his patrol car at an unarmed Detroit teen who was joyriding on an all-terrain vehicle. Damon Grimes, 15, crashed and died. Mark Bessner was convicted of involuntary manslaughter.

“These things can go from zero to 90 in a millisecond,” Convertino said Thursday, referring to sudden conflicts between police and the public. “This officer may have felt, ‘I’m getting overwhelmed. I'm exhausted. He might overpower me. He has my Taser.'”

Convertino said release of the videos could put “remarkable community pressure” on the Kent County prosecutor to charge the officer.

While the videos “are an important piece of evidence, they are not all of the evidence,” he said. "Our office has never made, and will not make, a decision based on partial evidence."

“That was my beloved son. You know how you love your firstborn son,” his mother, Dorcas, said through an interpreter.

AP reporter Don Babwin in Chicago contributed to this story.