Students of Color Push Back on Calls for Police in Schools 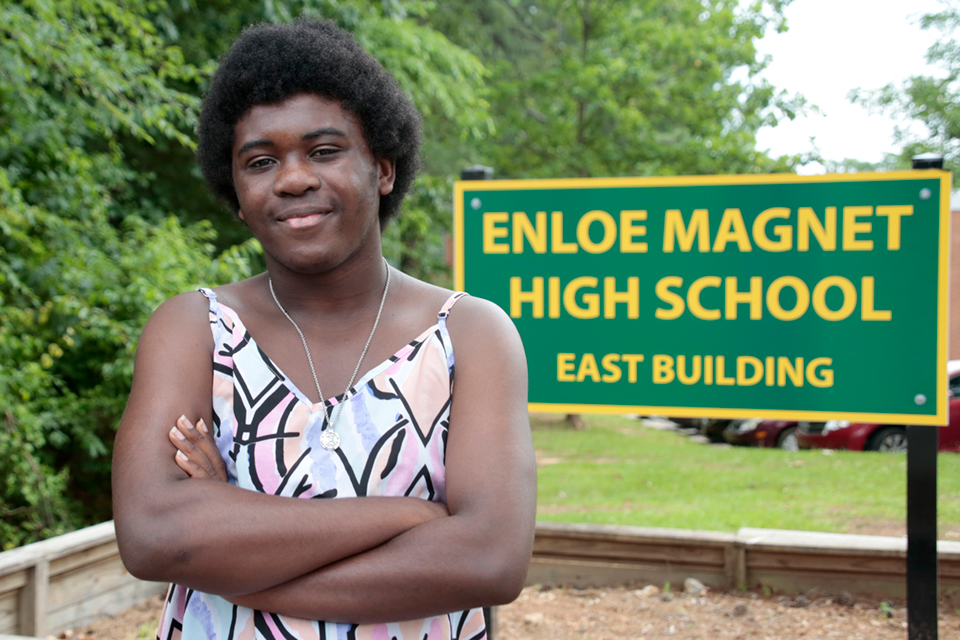 After the mass shooting at a Texas elementary school, schools around the country pledged to boost security measures and increased the presence of law enforcement on campus — partly to reassure parents and students.

But police inside schools can make some students more uneasy, not less. Especially for Black students and other students of color, their personal experiences with policing can leave them feeling unsafe and alienated from school when they see officers on campus.

High school senior Malika Mobley has seen three different school resource officers patrolling the campus in Raleigh, North Carolina. Once on the way home from school, Mobley saw officers detain a visibly distraught classmate and push the student into the back of a police vehicle.

“They were crying, ‘Why are you doing this to me? I didn’t do anything,'” said Mobley, co-president of Wake County Black Student Coalition.

“I was just forced to stand there and couldn't do anything.”

Since 2020, the student group has advocated for eliminating police officers from school buildings in favor of investing in counselors and support staff for students.

“We don’t see police presence as part of the solution,” Mobley said. “If you really think about why police don’t make us safer, you can draw connections to all types of tragedies that impact the most marginalized among us.”

Police officers have a regular presence at schools across the country in recent decades, often in the form of school resource officers, who are tasked with building relationships with young people to promote trust of law enforcement, providing security, and enforcing laws. Critics say having armed police on campus often results in Black students being disproportionately arrested and punished, leading to what they call the school-to-prison pipeline.

Researchers have found that Black students report feeling less safe around police officers than their white peers and that officers in predominantly Black school districts were more likely to view students themselves to be threats.

Black students and other students of color also are disproportionately likely to have negative interactions with police in schools, ranging from referrals to law enforcement to being arrested or restrained, said Katherine Dunn, director of the Opportunity to Learn program at the Advancement Project. Since 2007, the Advancement Project has documented at least 200 instances of officers at schools assaulting students, she said.

“It shows all the physical harms that young people experience by police," she said.

"It's also the experience of being degraded and made to feel like a criminal because you have to walk down the hallway to your class with several armed cops, who are not there for your safety, who you see arrest your friends, assault your friends.”

In 2018, after the mass shooting at Marjory Stoneman Douglas High School in Parkland, Florida, the state Legislature passed laws mandating public schools to have either law enforcement or armed personnel present on campuses.

A study of the law's impact by F. Chris Curran, a University of Florida professor, found the expanded police presence was followed by an increase in school arrests and the number of reported behavioral incidents. He said there are many factors to consider in deciding the role police play in schools.

“I'd like to see that conversation include thoughtful considerations of potential benefits, decreasing certain kinds of behaviors, but also the potential unintended consequences, if that's increasing the likelihood students are arrested or potentially increasing racial disparities in discipline and arrest rates,” Curran said.

While there are examples of school resource officers who have intervened in incidents of gun violence, Curran said, the presence of law enforcement does not always guarantee that shootings or other violence won't occur, or that the officer would be immediately effective at stopping the perpetrator and minimizing casualties.

In a statement issued this week on best practices for school security in the wake of the Uvalde, Texas, shooting, the National Association of School Resource Officers emphasized the importance of having “a carefully selected, specifically trained SRO on its campus whenever school is in session.”

The nonprofit group has rejected criticism that officers contribute to a school-to-prison pipeline. Officers who follow its best practices, it says, do not arrest students for disciplinary issues that would be handled ordinarily by educators.

As elsewhere around the country last week, the police presence was increased outside schools across North Carolina to provide reassurance to families in the wake of the Uvalde, Texas shooting.

The Wake County Black Student Coalition's campaign to remove the officers stemmed partly from student accounts of bad experiences with officers, including a 2017 incident where a school resource officer was filmed picking up a Black girl and slamming her to the ground, said Chalina Morgan-Lopez, a high school senior who is co-president of the student group.

“I think it's a reasonable response to want more officers in schools, especially from people who genuinely do feel protected by law enforcement, even though that's not my lived experience," Morgan-Lopez said. "But I think people need to take into account ... that officers do in fact do more harm than they do good."

Last summer the school system made several changes to its school resource officer program, including a new process for fielding grievances involving officers and adjustments to training to prepare them better for the school environment, said Lisa Luten, a spokesperson for the school system. The review was based on community feedback the district sought in the wake of the killing of George Floyd and the resurgence of the Black Lives Matter movement, Luten said.

“This is not a new conversation for us," she said. “That certainly brought it back to light.”