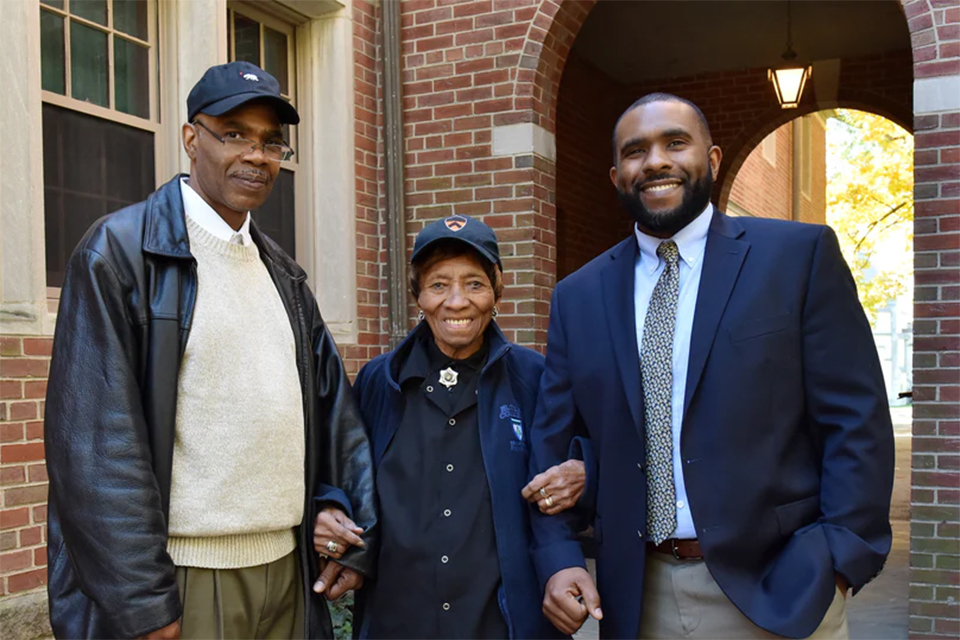 Laura Wooten was born in Goldsboro, North Carolina on December 19, 1920. Coming up during the women’s voting rights movement, she took to civic duty early, moving to Princeton, New Jersey as a young child and beginning as a volunteer at the election polls just after graduating high school in 1939. She worked as a teaching assistant at Community Park School in Princeton and then a nurse’s aide at Princeton Medical Center, where she served for 18 years. She then worked in the Campus Dining facility of Princeton University for more than 27 years, continuing to volunteer at the local, primary, and general election polls year after year in New Jersey. In 2018, she worked her last Election Day, marking 79 years at the polls for Wooten and making history as the longest-serving poll worker in the United States.

“Voting is your voice so if you don’t go out and vote for things, there will never be any changes."

That’s the only way you’ll get changes, is to vote. The privilege in a democracy of being able to vote means a lot to me,” she told reporters in a 2018 interview.

Wooten passed away in March 2019 at the age of 98 and was known as a beloved community member. Now Princeton’s Board of Trustees has voted to rename Marx Hall in honor of Wooten, renaming it the Laura Wooten Hall effective July 1, in honor of her “extraordinary contributions and…civic engagement at all levels,” a press statement reads.

“I am grateful to the Naming Committee for this inspiring recommendation, and I am delighted that Princeton will honor Laura Wooten for her extraordinary contributions to our nation and the democratic process. The addition of Laura Wooten’s name to the tapestry of our campus will recognize Princeton’s history, the breadth of our community, and the positive impact that one remarkable person can have through lifelong dedication to public service and civic values,” said Princeton President Christopher L. Eisgruber.

The newly renamed hall houses the University Center for Human Values, academic offices, multiple teaching spaces, and a library. The renaming suggestion was given to the Board by the Council of the Princeton University Community (CPUC) Committee on Naming. Beth Lew-Williams, Associate Professor of History and chair of the CPUC Committee on Naming wrote to the Board in favor of the renaming and about Wooten’s pioneering accomplishments on behalf of the CPUC.

“She never served as an elected official, worked in government, or even graduated from college, but she helped to safeguard one of the fundamental pillars of democracy: the right to vote... Laura Wooten was a Black woman who was educated in Princeton’s segregated public schools and worked at Princeton’s segregated hospital, but she never lost faith in the democratic system. She believed that everyone’s vote mattered and made it her duty to ensure citizens’ voting rights at the polls. Her dedication to service in honor of the democratic process - without compensation or recognition - aligns with core University values,” wrote Lew-Williams.

This is not Wooten’s first time being recognized on a large stage either. She has been honored for her service by the NJ State Senate, the municipality of Princeton, and several organizations including the League of Women Voters of NJ, the NJ NAACP, the National Association of Secretaries of States, and the National Newspaper Publishers Association. Last summer, Governor Phil Murphy also signed “Laura Wooten’s Law,” citing her as the longest-serving poll worker in the nation with an emphasis on creating a legislated middle school curriculum ensuring there are guidelines to help young people study the values undergirding the “American system of constitutional democracy, the function of government and the role of a citizen in a democratic society.”

“Laura Wooten’s life is a study in civics. She set a tremendous legacy of service. Even more importantly, in her life, born in the segregated South, she persevered through sexism and racism, including right here in New Jersey. Her life stands as evidence that change in a democracy comes not from those who hold elective office, but through the work of ordinary citizens,” Gov. Murphy said at the ceremony.

Thank you for your service, Ms. Wooten. Because of you, we can!