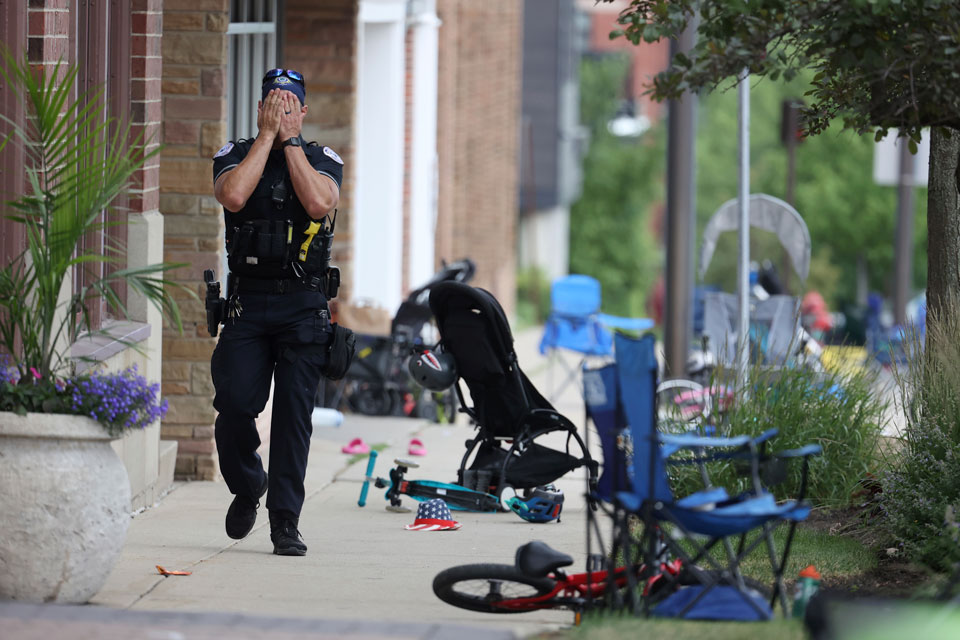 HIGHLAND PARK, Ill. (AP) — A shooter fired on an Independence Day parade from a rooftop in suburban Chicago, spraying the crowd with gunshots initially mistaken for fireworks before hundreds of panicked revelers of all ages fled in terror. At least six people were killed and at least 30 wounded.

An hourslong manhunt during which residents hunkered down in businesses or received police escorts to their homes ended with a traffic stop and brief chase Monday evening, when authorities detained a man they described as a person of interest. They gave no motive for the attack in Highland Park, a close-knit community on the shores of Lake Michigan that has long drawn the rich and sometimes famous.

The July 4 shooting was just the latest to shatter the rituals of American life. Schools, churches, grocery stores and now community parades have all become killing grounds in recent months. This time, the bloodshed came as the nation tried to find cause to celebrate its founding and the bonds that still hold it together.

“It definitely hits a lot harder when it’s not only your hometown but it’s also right in front of you,” resident Ron Tuazon said as he and a friend returned to the parade route Monday evening to retrieve chairs, blankets and a child’s bike that he and his family abandoned when the shooting began.

"Until laws change, it’s going to be more of the same.”

The shooting occurred at a spot on the parade route where many residents had staked out prime viewing points early in the day for the annual celebration. 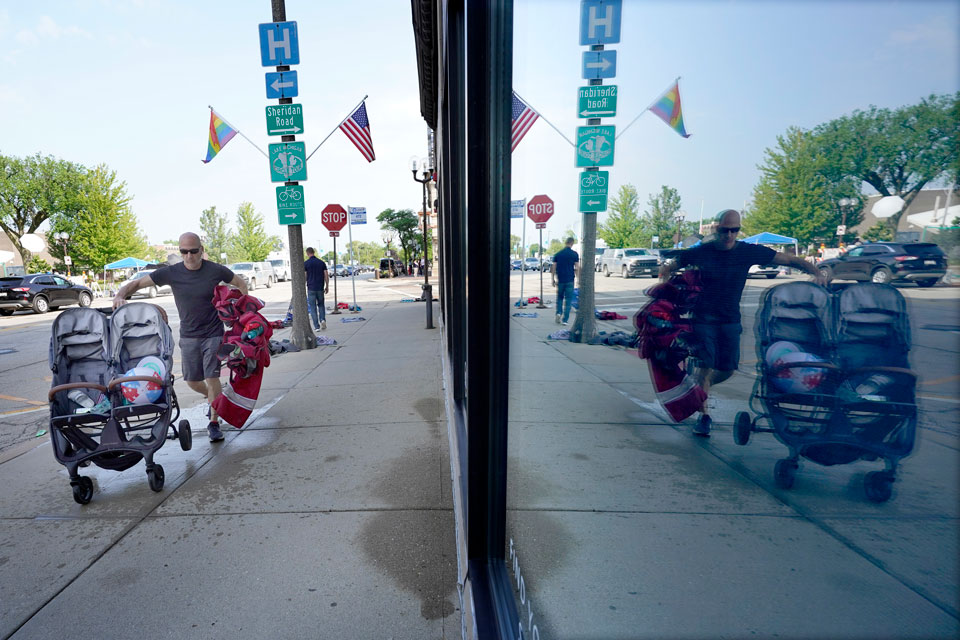 Highland Park, Ill., resident Murry Rosenbush is reflected in a store window as he removes items left behind by attendees to the town's Fourth of July parade Tuesday, July 5, 2022. A shooter fired on an Independence Day parade from a rooftop spraying the crowd with gunshots initially mistaken for fireworks before hundreds of panicked revelers of all ages fled in terror. (AP Photo/Charles Rex Arbogast)Among them was Nicolas Toledo, who was visiting his family in Illinois from Mexico. He was shot and died at the scene, his granddaughter, Xochil Toledo, told the Chicago Sun-Times. Also killed was Jacki Sundheim, a lifelong congregant and “beloved” staff member at nearby North Shore Congregation Israel, which announced her death on its website.

“There’s no safe place,” said Highland Park resident Barbara Harte, 73, who had stayed away from the parade fearing a mass shooting, but later ventured from her home.

Person of interest in custody

Authorities initially said Crimo, whose father once ran for mayor of Highland Park, was 22, but an FBI bulletin and Crimo's social media said he was 21.

Police declined to immediately identify Crimo as a suspect but said identifying him as a person of interest, sharing his name and other information publicly was a serious step. 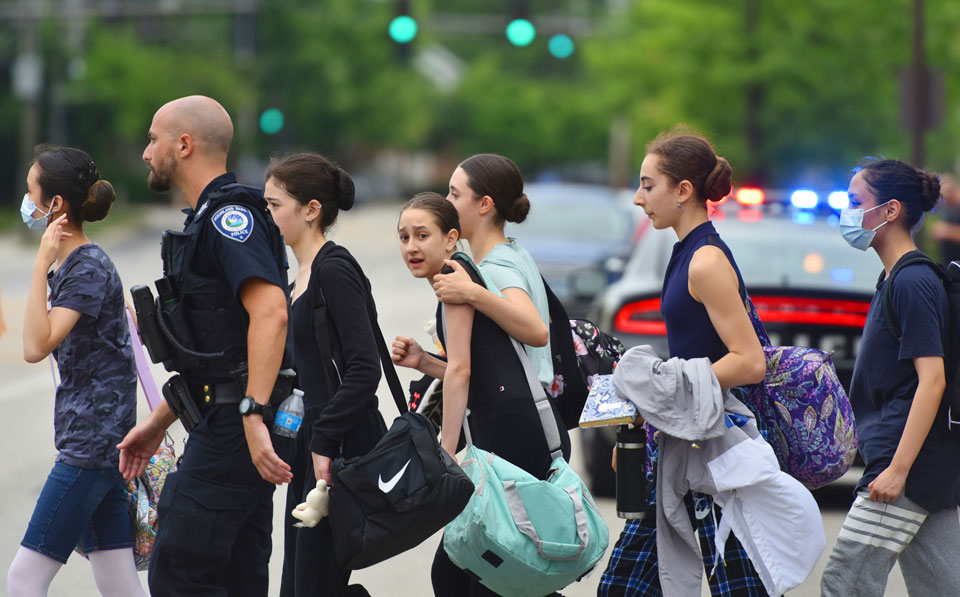 People are escorted away from the scene of a mass shooting at a Fourth of July parade in Highland Park, Ill., on Monday, July 4, 2022. (John Starks/Daily Herald via AP)Lake County Major Crime Task Force spokesman Christopher Covelli said at a news conference “several of the deceased victims” died at the scene and one died at a hospital. Lake County Coroner Jennifer Banek said the five people killed at the parade were adults, but didn’t have information on the sixth.

Victims' details not yet released

Police have not released details about the victims, but Toledo’s granddaughter told the Sun-Times that Toledo had spent most of his life in Morelos, Mexico. Xochil Toledo said she remembers looking over at her grandfather, who was in his late 70s, as a band passed them.

“He was so happy,” she said. “Happy to be living in the moment.”

Xochil Toledo said her father tried to shield her grandfather and was shot in the arm; her boyfriend also was shot in the back and taken by someone to nearby hospital because they weren’t sure there would be enough ambulances for all the victims.

Sundheim had spent decades on the staff at North Shore Congregation Israel, early on teaching at the congregation’s preschool and later serving as Events and B’nei Mitzvah Coordinator, “all of this with tireless dedication,” the congregation said in its statement announcing her death.

“Jacki’s work, kindness and warmth touched us all,” the statement said. 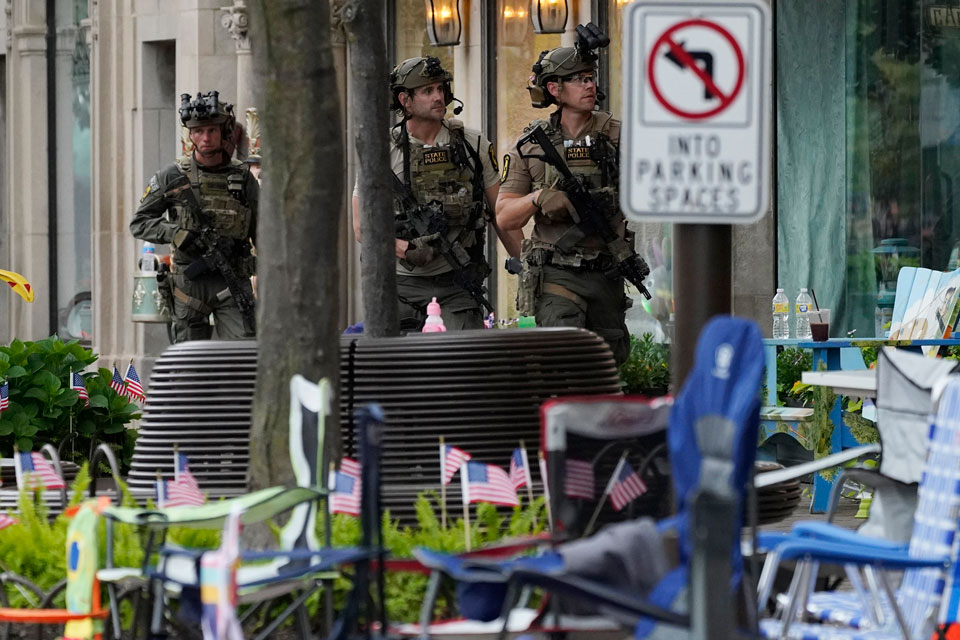 Law enforcement search after a mass shooting at the Highland Park Fourth of July parade in downtown Highland Park, Ill., a Chicago suburb on Monday, July 4, 2022. (AP Photo/Nam Y. Huh)NorthShore University Health Center received 26 patients after the attack. All but one had gunshot wounds, said Dr. Brigham Temple, medical director of emergency preparedness. Their ages ranged from 8 to 85, and Temple estimated that four or five were children.

“It is devastating that a celebration of America was ripped apart by our uniquely American plague,” Illinois Gov. J.B. Pritzker said at a news conference.

“While we celebrate the Fourth of July just once a year, mass shootings have become a weekly — yes, weekly — American tradition.”

Since the start of the year, there have been 15 shootings where four or more people have been killed, including the Highland Park one, according to The Associated Press/USA TODAY/Northeastern University mass killing database.

As is common on holiday weekends, nearby Chicago grappled with scores of shootings. Eight people died from shootings in the city over the July 4 weekend, according to the police department. Sixty others were shot.

The parade shooter opened fire around 10:15 a.m., when the parade was about three-quarters through, authorities said.

Highland Park Police Commander Chris O’Neill, the incident commander on scene, said the gunman apparently used a “high-powered rifle” to fire from a spot atop a commercial building where he was “very difficult to see.” He said the rifle was recovered at the scene. Police also found a ladder attached to the building.

Teams of FBI agents on Tuesday peeked into trash cans, looked under picnic blankets and scoured Highland Park's Central Avenue as they searched for evidence at the site of the shooting.

Highland Park Mayor Nancy Rotering told NBC’s “Today” show that she did not know where the gun came from but that it was “legally obtained.”

President Joe Biden on Monday said he and first lady Jill Biden were “shocked by the senseless gun violence that has yet again brought grief to an American community on this Independence Day.”

In recent days, Biden signed the widest-ranging gun violence bill passed by Congress in decades, a compromise that reflected at once both progress on a long-intractable issue and the deep-seated partisan divide that persists. 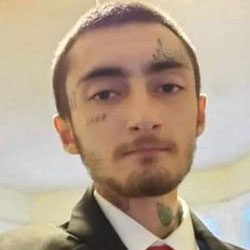 Detainee Robert Crimo IIICrimo, who goes by the name Bobby, was an aspiring rapper with the stage name Awake the Rapper, posting on social media dozens videos and songs, some ominous and violent.

In one animated video since taken down by YouTube, Crimo raps about armies “walking in darkness” as a drawing appears of a man pointing a rifle, a body on the ground and another figure with hands up in the distance.

Crimo’s father, Bob, a longtime deli owner, ran unsuccessfully for mayor of Highland Park in 2019, calling himself “a person for the people.”

The community of about 30,000 on Chicago’s north shore has mansions and sprawling lakeside estates and was once home to NBA legend Michael Jordan.

Gina Troiani and her 5-year-old son were lined up with his daycare class ready to walk onto the parade route when she heard a loud sound that she believed was fireworks — until she heard people yell about a shooter.

“We just start running in the opposite direction,” she told The Associated Press. “There were people that got separated from their families, looking for them. Others just dropped their wagons, grabbed their kids and started running.”