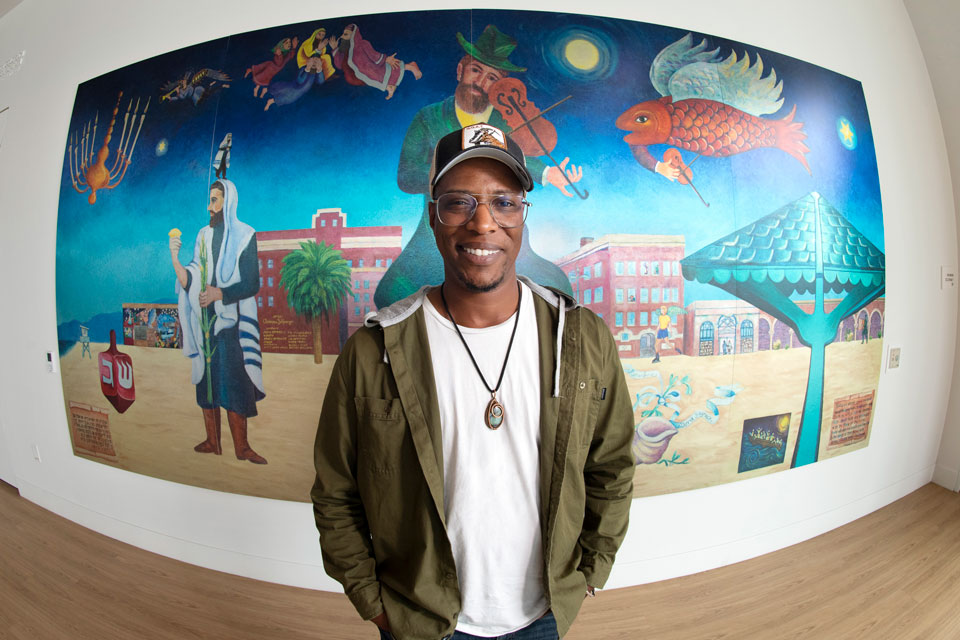 LOS ANGELES (AP) — Nate Looney is a Black man who grew up in Los Angeles, a descendant of enslaved people from generations ago. He’s also an observant, kippah-wearing Jew.

But he doesn’t always feel welcome in Jewish spaces — his skin color sometimes elicits questioning glances, suspicions and hurtful assumptions. Once, he walked into a synagogue dressed for Shabbat services in slacks and a buttoned-down shirt and was told to go to the kitchen.

“The last thing you want to happen when you go to a synagogue to attend a service,” Looney said, “is to be treated like you don't belong.”

Now Looney is in a position to do something about that, after being named to the new role of director of community, safety and belonging for the Jewish Equity Diversity and Inclusion team at the Jewish Federations of North America, or JFNA, in April. He believes he can channel his painful personal experiences into healing divisions and changing perceptions, and help make a trip to the synagogue a spiritual rather than a scarring encounter for Jews of color.

In this new role, Looney has been tackling the delicate task of producing guidelines on how to be more welcoming of Jews of color, even as synagogues and community centers strengthen security in the wake of recent attacks including mass shootings in Pittsburgh and Poway, California. The concern is that such boosted security increases the likelihood of racial profiling incidents affecting congregants of color.

It’s a relatively small but growing demographic. A Pew Center survey in 2021 showed just 8% of U.S. Jews identify as Hispanic, Black or Asian, but that nearly doubled to 15% among respondents aged 18 to 29. The poll also found that 17% reported living in a nonwhite or multiracial household.

Looney, 37, has led a life that has taken several turns. He served in the military police as part of the Louisiana National Guard and spent nine months overseas training Iraqi police forces. He has worked in real estate and has even done urban farming, selling microgreens in local markets.

His spiritual journey began at 13 when a friend asked Looney, whose father was Baptist and mother was Episcopalian, about his own religion. Despite his family's Christian faith, Looney said he never felt connected to it.

“I was obstinate that (Christianity) wasn’t for me,” he said. “When I think about African enslavement in America and how religion was something that was forced, I believed that the religion I was practicing was not true to who my ancestors were.”

Looney embraced Judaism while still a teen because he viewed it as a faith that gives believers permission to ask difficult, uncomfortable questions, though he didn’t formally convert until age 26.

It was after the police killing of George Floyd and the racial reckoning of summer 2020 that Looney began working with organizations to raise awareness about Jews of color. It was also during that time that JFNA launched its diversity, equity and inclusion initiative.

Looney said Jews of color are often subjected to questions about their Jewish origins. Even when well intentioned, those queries can be painful because they cast doubt on their identity right away and imply they don’t belong, he said.

Add to that the increased security at synagogues, and there’s even greater potential for people to feel othered or unwelcome.

“How do you strike a balance?

"You don’t want to exclude anyone, and yet you want to be discerning of who is coming in the door,” Looney said.

“Cultural competency is important. Just the fact that someone who is Black is walking in shouldn’t raise alarms.”

He knows from personal experience. The morning of the Tree of Life synagogue mass shooting in Pittsburgh on Oct. 27, 2018, Looney was unaware it had taken place because he was not using his phone in observance of Shabbat. When he entered a synagogue, he got more questions and “experienced deeper scrutiny” from security guards, and it was painful.

“If that were my first time entering that community,” he said, “I would’ve never come back.”

Guidelines: a work in progress

The guidelines he is working on will be shared with Jewish federations across North America and, Looney hopes, implemented at the local level by synagogues and community centers. Just two months into his job, he says they are a work in progress but will continue to evolve over time.

One goal is to inculcate in security guards a deeper understanding of the diversity of the Jewish community, he said: “We’re starting to have these types of conversations and that’s a great beginning.”

Rabbi Isaiah Rothstein, who founded the diversity, equity and inclusion initiative and serves as JFNA’s public affairs advisor, said Looney’s professional experience as a military policeman and his lived experience as a Jewish person of color make him uniquely qualified to boost inclusivity while being cognizant of the sensitive relationship between law enforcement and people of color.

“Security and belonging don’t have to be mutually exclusive,” said Rothstein, who is the son of a white father and a Black mother and has seen his darker-skinned relatives being treated differently in synagogues. “Nate is helping us bring an equity lens to make sure all our institutions are safe and secure while creating a culture of belonging for all Jews and our loved ones.”

Sabrina Sojourner, an African American Jewish chaplain at St. Elizabeths Hospital in Washington who met Looney at a leadership seminar five years ago, said people of color are “profiled consciously and unconsciously by white people” and Looney's role at the JFNA is crucial to help transform assumptions about “who is the threat and who is not.”

“If you look at attacks against Jewish people and synagogues, they are not perpetrated by people of color,” Sojourner said.

Looney said another challenge is that antisemitism and racism tend to be compartmentalized.

“It's a tough job to make people understand that many of us have multiple identities and fit into both categories and that we are all fighting against white supremacy,” he said.

Placing Jews of color in decision-making roles in Jewish spaces can help forge solidarity and bring the realization that “marginalized communities are stronger when they come together,” he added.

Rothstein believes Looney will make a big difference because “he is also a healer.” As an example, he cited a virtual JFNA event commemorating Martin Luther King Day in 2021 when Looney recited a prayer and sang “Lift Every Voice and Sing,” a hymn written by NAACP leader James Weldon Johnson in 1900 and often referred to as the “Black national anthem.”

“Those three minutes felt like three hours and they felt like three seconds,” Rothstein said. “It’s how Nate holds himself. He is so accessible to people because of his heart. That comes through the life he has lived.”

Associated Press religion coverage receives support through the AP’s collaboration with The Conversation US, with funding from Lilly Endowment Inc. The AP is solely responsible for this content.