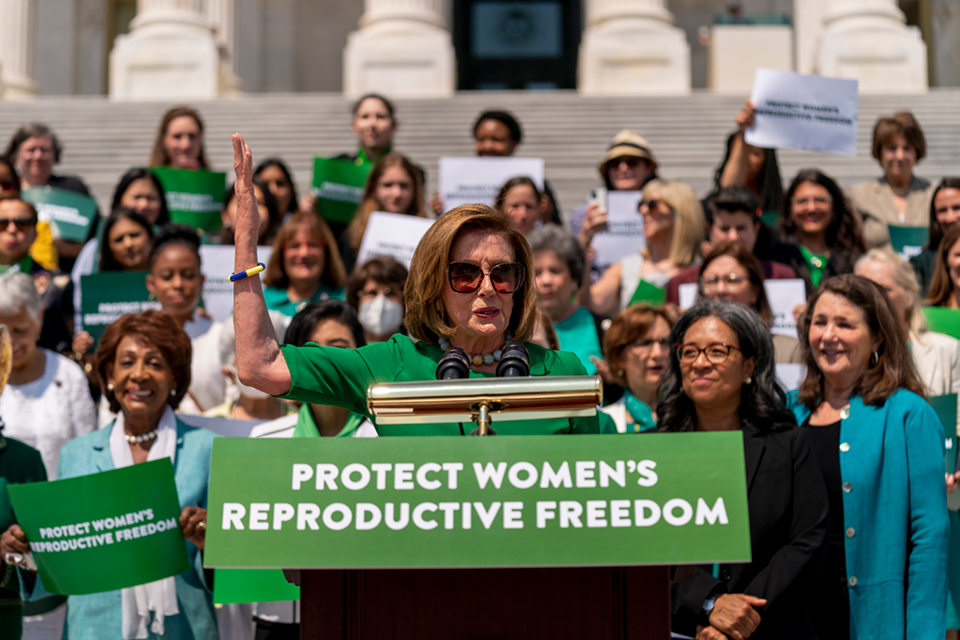 The bill has little chance of becoming law, with the necessary support lacking in the 50-50 Senate. Yet voting marks the beginning of a new era in the debate as lawmakers, governors and legislatures grapple with the impact of the court's decision.

The legislation passed 219-210. The House also passed a second bill to prohibit punishment for a woman or child who decides to travel to another state to get an abortion, 223-205.

“Just three weeks ago the Supreme Court took a wrecking ball to the fundamental rights by overturning Roe v. Wade,” said House Speaker Nancy Pelosi ahead of the votes, gathering with other Democratic women on the steps of the Capitol.

“It is outrageous that 50 years later, women must again fight for our most basic rights against an extremist court.”

Republicans spoke forcefully against the two bills, praising the Supreme Court’s decision and warning that the legislation would go further than Roe ever did when it comes to legalizing abortion.

She said the Democratic legislation “has nothing to do with protecting the health of women. It has everything to do with forcing an extreme agenda on the American people.”

By overturning Roe, the court has allowed states to enact strict abortion limits, including many that had previously been deemed unconstitutional. The ruling is expected to lead to abortion bans in roughly half the states.

Already, a number of GOP-controlled states have moved quickly to curtail or outlaw abortion, while states controlled by Democrats have sought to champion access. Voters now rank abortion as among the most pressing issues facing the country, a shift in priorities that Democrats hope will reshape the political landscape in their favor for the midterm elections.

This is the second time the House has passed the bill, which would expand on the protections Roe had previously provided by banning what supporters say are medically unnecessary restrictions that block access to safe and accessible abortions. It would prevent abortion bans earlier than 24 weeks, which is when fetal viability, the ability of a human fetus to survive outside the uterus, is generally thought to begin. It allows exceptions for abortions after fetal viability when a provider determines the life or health of the mother is at risk.

The Democrats’ proposal would also prevent states from requiring providers to share “medically inaccurate” information, or from requiring additional tests or waiting periods, often aimed at dissuading a patient from having an abortion.

The bill that would prohibit punishment for traveling out of state would specify that doctors can’t be punished for providing reproductive care outside their home state. Democratic Rep. Lizzie Fletcher of Texas, one of the bill’s authors, said the threats to travel “fail to reflect the fundamental rights that are granted in our Constitution.”

Democrats have highlighted the case of a 10-year-old girl who had to cross state lines into Indiana to get an abortion after being raped, calling it an example of how the court's decision is already having severe consequences.

“We don’t have to imagine why this might matter. We don’t need to conjure up hypotheticals. We already know what’s happened,” Democratic Sen. Amy Klobuchar said Thursday on the Senate floor.

The Constitution doesn’t explicitly say travel between states is a right, though the Supreme Court has said it is a right that “has been firmly established and repeatedly recognized.” Yet the court has never said exactly where the right to travel comes from and that could leave it open to challenge or elimination, as the right to an abortion was.

Lawmakers in Missouri earlier this year, for example, considered making it illegal to “aid or abet” abortions that violate Missouri law, even if they occur out of state. The proposal was ultimately shelved.

A woman's right to choose

Democrats have teed up more bills for passage in the coming weeks. Majority Leader Steny Hoyer, D-Md., said Friday that the House will vote next week on legislation guaranteeing a right to contraception.

GOP Sen. James Lankford of Oklahoma, who supports instituting a nationwide ban on abortion, accused his colleagues across the aisle Thursday of seeking to “inflame" the issue of abortion. He said proponents of the travel bill should ask themselves, “Does the child in the womb have the right to travel in their future?”

Only two Senate Republicans, Sens. Lisa Murkowski and Susan Collins, have been supportive of abortion rights, but they do not support the Democrats' proposal, calling it too far-reaching. They have introduced alternative legislation that would bar states from placing an "undue burden” on a woman's ability to obtain an abortion before fetal viability, among other provisions.

When pressed Thursday on whether Democrats should work with the two senators, Pelosi pushed back,

“We’re not going to negotiate a woman’s right to choose."

Since the court's ruling last month, some activists have accused President Joe Biden and other top Democrats of failing to respond forcefully enough to the decision. Biden, who denounced the court's ruling as “extreme,” last week issued an executive order intended to head off some potential penalties that women seeking abortion may face. His administration has also warned medical providers that they must offer abortion if the life of the mother is at risk.

Meanwhile, the Democratic National Committee has already launched a digital ad campaign to energize voters on the issue, warning that Republicans’ ultimate goal is to outlaw abortion nationwide.

“We have to elect a couple more Democratic senators so that we can get around the filibuster so that we can pass legislation that truly impacts a woman’s right to choose,” she said. “There’s no halfway measure.”