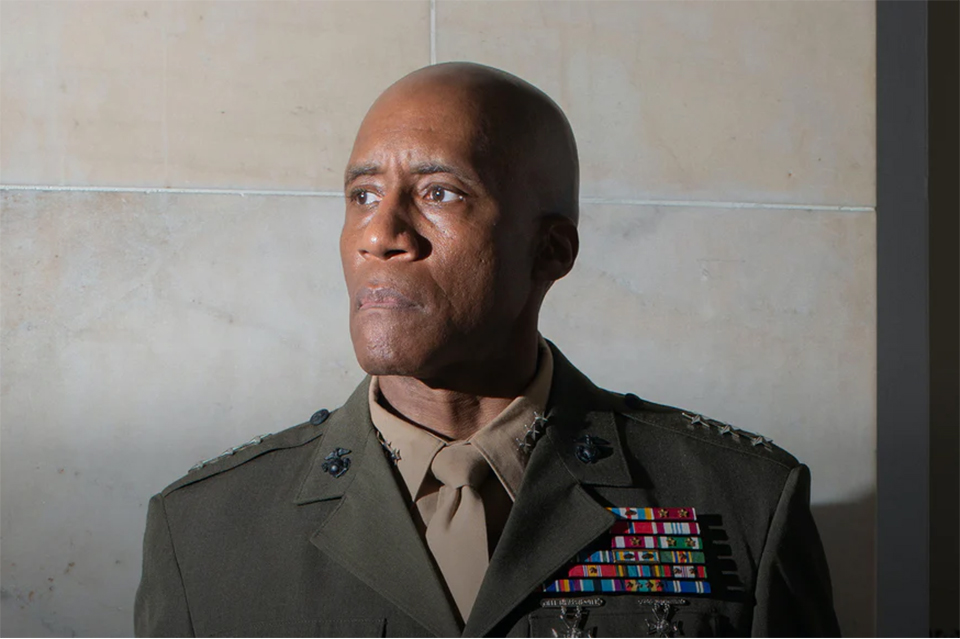 The U.S. Marines Corps are set to welcome the first Black four-star general in the branch’s 246-year-history, the Washington Post reports.

Michael E. Langley’s name has been ringing bells since he was a young Marine in the 80s, showing out at flag football games, setting records for writing training courses, and getting tapped by higher-ups to mediate disputes. Back then, he was a first lieutenant and one of a handful of Black Marines based in the downtown D.C. barracks.

One person who took notes was Maj. Ronald Bailey, a now three-star general, who saw that Langley had a lot of potential and decided to mentor him and share some advice.

“You will live under a microscope. You must always set the standard,” Bailey told Langley at the time.

Now three decades later, he’s done well with those teachings, serving in Afghanistan, Somalia and Japan. He’s also held top positions at the Pentagon and as head of the U.S. Marine Corps Forces Europe and Africa. Currently, Langley leads the Marine forces on the East Coast, many describing him as straightforward and highly competent.

After decades of working his way up through the ranks, Langley has finally been nominated for the Marine’s highest honor, being nominated to lead all U.S. military forces in Africa as chief of U.S. Africa Command. If confirmed at his Senate hearing on Thursday, Langley will make history as the first Black person to receive four stars since the Marine Corps founding 246 years ago.

For many of the Black three-star generals in the Marine Corps, the appointment feels like the manifestation of a dream they’d thought would never come. More importantly, it’s a moment to reflect on all of the other generals who should’ve had the opportunity but never did. Retired three-star Lt. Gen. Walter Gaskin had his own words of encouragement for Langley when he heard the news.

“As you looked at the horizon, you saw the end. You didn’t see what was over the horizon because no one was there…You have all the credentials in the world. No one can doubt you deserve this…You carry the legacy…the weight of all those who came before you who didn’t have the same opportunities,” Gaskin recalled telling Langley.

“Even right now, I get chills thinking about it,”

If confirmed, Langley will be stationed in Stuttgart, Germany, in charge of nearly 6,000 U.S. troops in Africa, about 1,300 of them stationed in West Africa and another 3,500 stationed at a base in Djibouti. While many of the U.S. forces there are rarely engaged in direct combat, according to Brookings Institution senior fellow Michael O’Hanlon, the forces are combating a variety of “unique challenges,” involving climate change, population growth, and political instability. Couple that with growing insurgencies in the Sahel region and it’s a pretty tall order.

Still, Langley has the experience, leading the U.S. Marine Corps Forces in Africa and Europe since November 2020. Not only is he poised in his leadership style, but many enjoy working for him and Lt. Gen. H. Stacy Clardy III once said he found his “judgment to be flawless.”

Much of who he is, Langley credits to his father, Willie C. Langley, a former noncommissioned officer in the Air Force. The elder Langley had to make the hard decision to retire from his post after an overseas deployment threatened to separate him from Langley and his siblings. After the death of their mother, his father chose to put his children before his career, a decision Langley has said continues to stick with him over the years.

Considered a consummate professional, many are rooting for Langley as he prepares for the impending Senate confirmation hearing. His nomination brings to mind former Marine Corps like Lt. Gen. Frank Peterson, the first Marine to become a three-star general in 1986, and Gilbert “Hashmark” Johnson, one of the first Black enlisted Marines during integration in 1942. If confirmed, Langley will serve as inspiration for an entirely new generation of potential Marines, a responsibility that all Black Marines must take in stride.

“We live standing on the shoulders of those who have gone before us. And then we provide shoulders for others to stand on,” said retired Lt. Gen. Willie Williams, the third Black Marine in history to receive three stars.