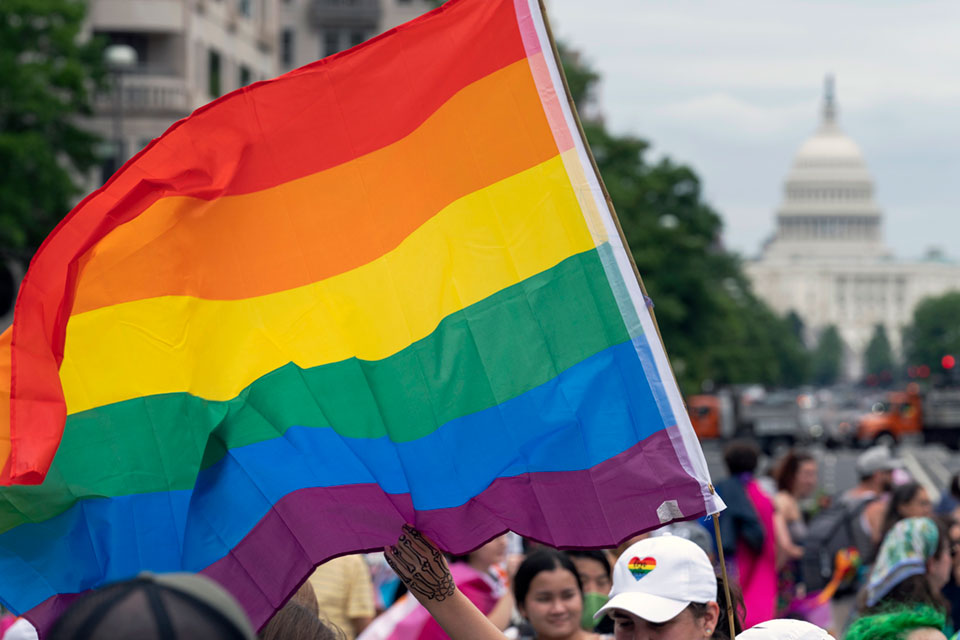 The legislation started as an election-season political effort to confront the new Supreme Court majority after the court overturned abortion access in Roe v. Wade, raising concerns that other rights were at risk. But suddenly it has a shot at becoming law. Pressure is mounting on Republicans to drop their longstanding opposition and join in a bipartisan moment for gay rights.

“This legislation was so important,” Senate Majority Leader Chuck Schumer said as he opened the chamber Wednesday.

The Democratic leader marveled over the House's 267-157 tally, with 47 Republicans — almost one-fifth of the GOP lawmakers — voting for the bill late Tuesday.

“I want to bring this bill to the floor,” Schumer said, “and we're working to get the necessary Senate Republican support to ensure it would pass.”

Political odds are still long for the legislation, the Respect for Marriage Act, which would enshrine same-sex and interracial marriages as protected under federal law. Conservatives, including House GOP leaders, largely opposed the bill, and the vast majority of Republicans voted against it.

But in a sign of shifting political attitudes and a need for an election-year win, some Republicans are signaling there may be an opening. Few Republicans spoke directly against gay marriage during Tuesday's floor debate in the House. And Senate Republican leader Mitch McConnell was notably silent when asked about the bill, saying he would take a look if it comes to the Senate.

“I'm going to delay announcing anything on that issue,” McConnell said, adding he would wait to see if Schumer brings it forward.

President Joe Biden wants Congress to send him the bill to sign as soon as possible.

“This is something that’s personal to the president,” White House press secretary Karine Jean-Pierre told reporters traveling with the president.

Biden is “a proud champion of the right for people to marry whom they love and is grateful to see bipartisan support for that right,” she said. “He believes it is non-negotiable and that the Senate should act swiftly to get this to the president’s desk. He wants to sign it, so we need this legislation and we urge Congress to move as quickly as possible.”

So far, the legislation has just two Senate Republican co-sponsors, Susan Collins of Maine and Rob Portman of Ohio. Lisa Murkowski of Alaska and Thom Tillis of North Carolina are among others closely watched for possible support.

In all 10 Republican senators would need to join with all Democrats to reach the 60 vote threshold to overcome a GOP filibuster.

The No. 2 Republican, Sen. John Thune of South Dakota, was doubtful Tuesday, calling the proposed legislation little more than a political message.

Social issues including same-sex marriage and abortion have sprinted to the top of the congressional agenda this summer in reaction to the Supreme Court's action overturning Roe v. Wade, a stunning ruling that ended the nearly 50-year-old constitutional right to abortion access. It set off alarms that other rights conservatives have targeted could be next.

While Justice Samuel Alito, writing for the majority, insisted the Roe v. Wade ruling pertained only to abortion access, it demonstrated the new conservative muscle with three Trump-era justices tipping the court's balance. A concurring opinion by Justice Clarence Thomas, who has gained stature in the new majority, raised questions about gay marriage and other rights.

"We take Justice Thomas — and the extremist movement behind him — at their word," said Speaker Nancy Pelosi during the House debate. “This is what they intend to do.”

Both Pelosi and Schumer criticized Sen. Ted Cruz, R-Texas, who said over the weekend that the Supreme Court’s 2015 Obergefell vs. Hodges decision upholding gay marriage was “clearly wrong.”

The Respect for Marriage Act was rushed to the House floor in an election year with polling showing a majority of Americans favor preserving rights to marry, regardless of sex, gender, race or ethnicity, a long-building shift in modern mores toward inclusion.

A Gallup poll released in June of 2021 showed broad and increasing support for same-sex marriage, with 70% of U.S. adults saying they think such unions should be recognized by law. The poll showed majority support among both Democrats (83%) and Republicans (55%).

Approval of interracial marriage in the U.S. hit a six-decade high at 94% in September, according to Gallup.

McConnell, the Republican leader, is eager to regain control of the Senate, now evenly split 50-50, and his views on whether his party should support or oppose the same-sex marriage protections will almost certainly be viewed through that political lens.

Unlike the abortion issue, where views are deeply held with little room for Congress to find common ground, attitudes toward same-sex continue to evolve and shift among lawmakers.

Incumbent Republican senators seeking to win reelection and GOP candidates running for office may want a chance to support the gay marriage issue that is popular with many voters. Strong Republican-led opposition could be seen as detrimental to the party's candidates in swing states that McConnell needs to win to regain control.

One Republican hopeful, Joe O'Dea, who is challenging incumbent Democratic Sen. Michael Bennet in Colorado, said he was glad to see the same-sex marriage bill pass in the House.

“You’ve got a lot of politicians in both political parties who spend way too much time trying to tell people how to live their lives. That’s just not me. I live my life. You live yours," O'Dea said. "Let’s get on with solving the huge challenges facing the American people.”

Still, some vocal leaders in the Republican Party, including Cruz and Sen. Josh Hawley of Missouri, both potential presidential candidates, have indicated likely opposition to the legislation.

The Respect for Marriage Act would repeal the Clinton-era Defense of Marriage Act, which put into federal law the definition of marriage as a heterosexual union between a man and woman. That 1996 law was largely overshadowed by subsequent court rulings, including Obergefell vs. Hodges in 2015, legalizing gay marriage nationwide.