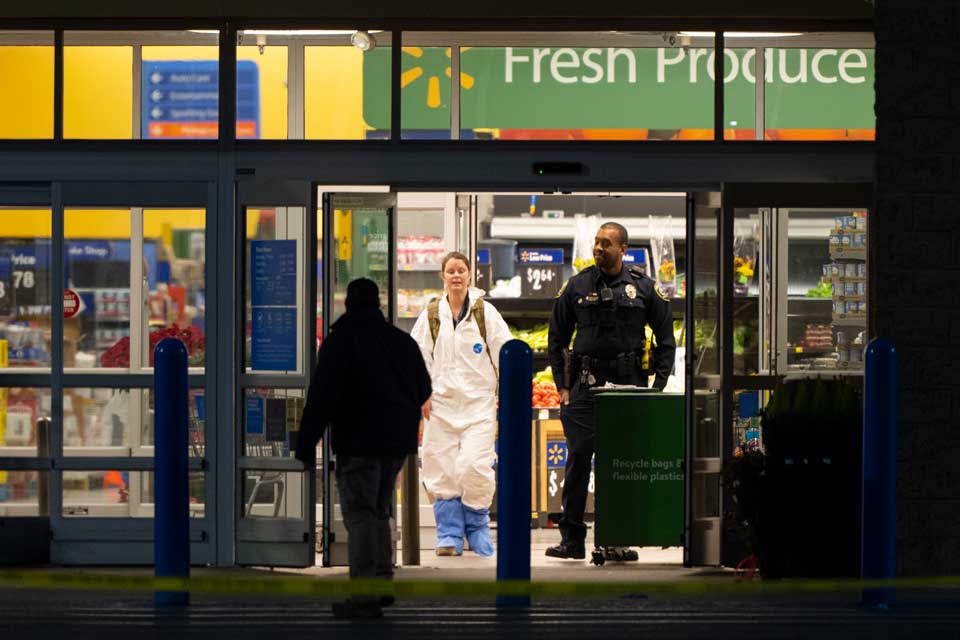 The gunman, who apparently shot himself, was dead when police found him, Chesapeake Police Chief Mark G. Solesky said. There was no clear motive for the shooting, which also put four people in the hospital.

The store was busy just before the attack Tuesday night as people stocked up ahead of the Thanksgiving holiday, a shopper told a local TV station. 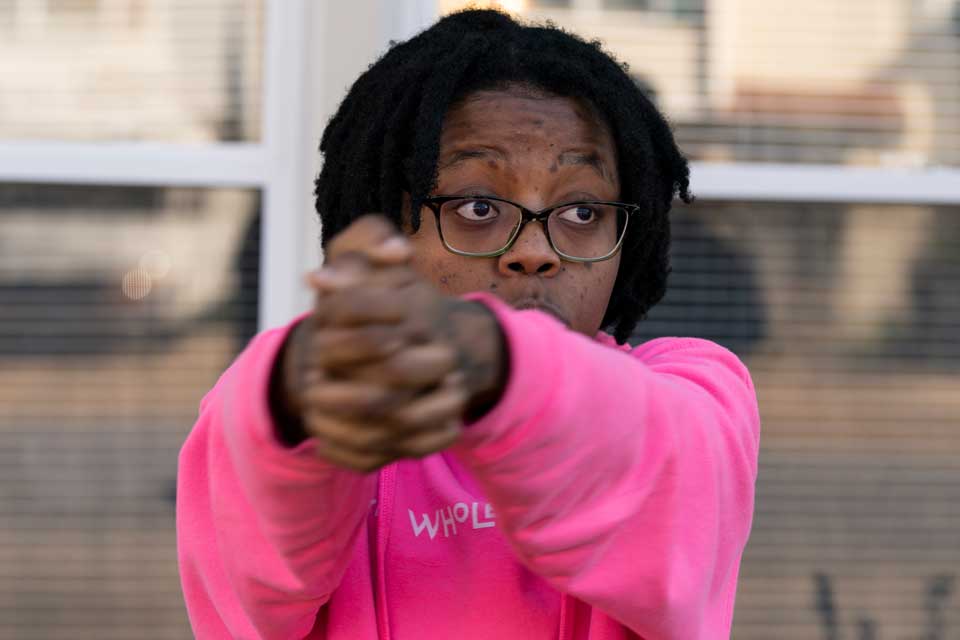 “I looked up, and my manager just opened the door and he just opened fire,” she told ABC’s “Good Morning America," adding that “multiple people” dropped to the floor.

Solesky confirmed that the shooter, who used a pistol, was a Walmart employee but did not give his name because his family had not been notified. The police chief could not confirm whether the victims were all employees. 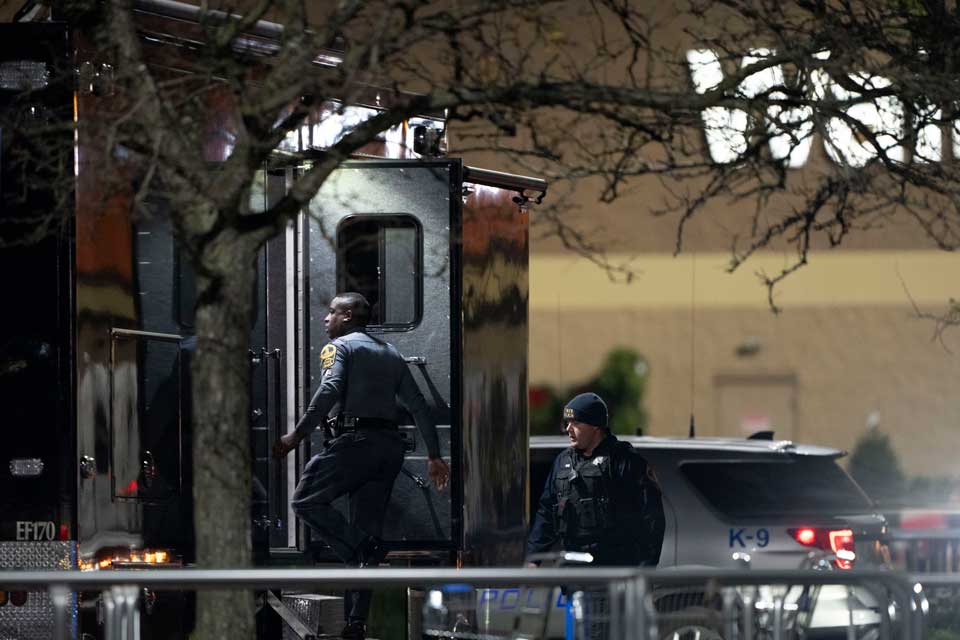 Law enforcement enter a command vehicle as they work the scene of a mass shooting at a Walmart, Wednesday, Nov. 23, 2022, in Chesapeake, Va. (AP Photo/Alex Brandon)Employee Jessie Wilczewski told Norfolk television station WAVY that she hid under the table and the shooter looked at her with his gun pointed at her, told her to go home and she left.

“It didn’t even look real until you could feel the ... ‘pow-pow-pow,’ you can feel it," Wilczewski said. “I couldn’t hear it at first because I guess it was so loud, I could feel it.”

Gov. Glenn Youngkin tweeted that he was in contact with law enforcement officials in Chesapeake, Virginia’s second-largest city, which lies next to the seaside communities of Norfolk and Virginia Beach.

“Our hearts break with the community of Chesapeake this morning,” Youngkin wrote.

“Heinous acts of violence have no place in our communities.”

It was the second time in a little more than a week that Virginia has experienced a major shooting. Three University of Virginia football players were fatally shot on a charter bus as they returned to campus from a field trip on Nov. 13. Two other students were wounded. 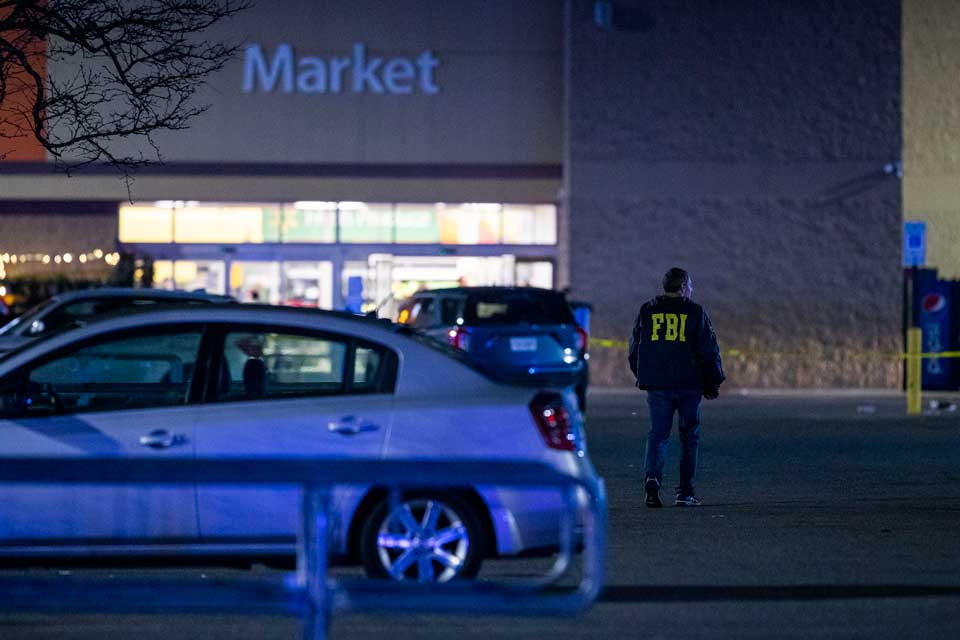 A member of the FBI walks in the parking lot of a Walmart, following a mass shooting early Wednesday, Nov. 23, 2022 in Chesapeake, Va. (Kendall Warner/The Virginian-Pilot via AP)“I am devastated by the senseless act of violence that took place late last night in our city,” Mayor Rick W. West said in a statement posted on the city's Twitter account Wednesday. “Chesapeake is a tight-knit community, and we are all shaken by this news.”

A database run by The Associated Press, USA Today and Northeastern University that tracks every mass killing in America going back to 2006 shows this year has been especially violent.

The U.S. has now had 40 mass killings so far in 2022, compared with 45 for all of 2019. The database defines a mass killing as at least four people killed, not including the killer.

The attack at the Walmart came three days after a person opened fire at a gay nightclub in Colorado, killing five people and wounding 17. Last spring, the country was shaken by the deaths of 21 when a gunman stormed an elementary school in Uvalde, Texas. 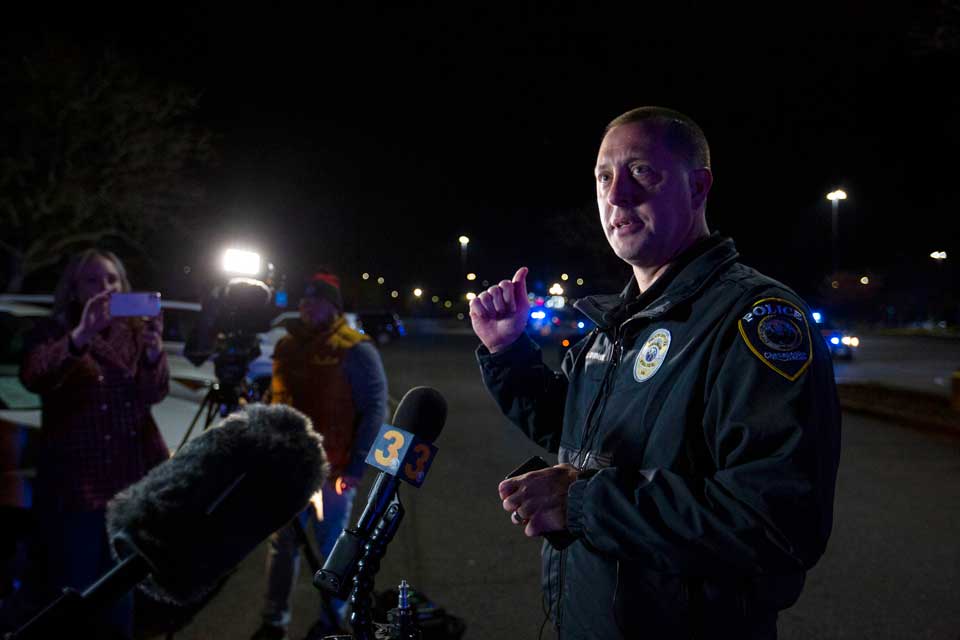 Chesapeake Police Public Information Officer Leo Kosinski delivers an update to the press following a mass shooting at a Chesapeake, Va., Walmart, Tuesday, Nov. 22, 2022. (Kendall Warner/The Virginian-Pilot via AP)Tuesday night's shooting also brought back memories of another at a Walmart in 2019, when a gunman who targeted Mexicans opened fire at a store in El Paso, Texas, and killed 22 people.

A 911 call about the shooting came in just after 10 p.m. Solesky did not know how many shoppers were inside, whether the gunman was working or whether a security guard was present.

Joetta Jeffery told CNN that she received text messages from her mother who was inside the store when the shots were fired. Her mother, Betsy Umphlett, was not injured.

“I had just talked to her about buying turkeys for Thanksgiving, then this text came in.”

One man was seen wailing at a hospital after learning that his brother was dead, and others shrieked as they left a conference center set up as a family reunification center, The Virginian-Pilot reported.

Camille Buggs, a former Walmart employee, told the newspaper she went to the conference center seeking information about her former co-workers.

“You always say you don’t think it would happen in your town, in your neighborhood, in your store — in your favorite store, and that’s the thing that has me shocked,” Buggs said.

Walmart tweeted early Wednesday that it was “shocked at this tragic event.”

In the aftermath of the El Paso shooting, Walmart made a decision in September 2019 to discontinue sales of certain kinds of ammunition and asked that customers no longer openly carry firearms in its stores.

It stopped selling handgun ammunition as well as short-barrel rifle ammunition, such as the .223 caliber and 5.56 caliber used in military style weapons. Walmart also discontinued handgun sales in Alaska.

The company had stopped selling handguns in the mid-1990s in every state but Alaska. The latest move marked its complete exit from that business and allowed it to focus on hunting rifles and related ammunition only.

Many of its stores are in rural areas where hunters depend on Walmart to get their equipment.