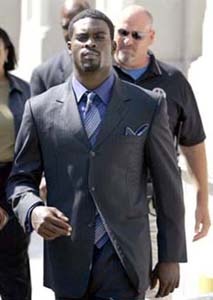 PHILADELPHIA – A remorseful Michael Vick wants a second chance and a fresh start with the Philadelphia Eagles — and knows he won't be easily forgiven by fans.
"I know I've done some terrible things, made a horrible mistake. Now I want to be part of the solution and not the problem," Vick said Friday, referring to his conviction for his role in running a dogfighting ring.
Vick was introduced at a press conference a day after signing a one-year deal with an option for a second year with the Eagles.
Vick was flanked by Eagles coach Andy Reid and mentor Tony Dungy.
"I really got the sense he wanted to do some great things," Dungy said. "He wanted to be a positive role model for young people. He wanted to get back to his family."
The 29-year-old Vick has been out of action since 2006. The former Atlanta Falcons star served 18 months of a 23-month sentence in federal prison.
He also was suspended indefinitely by the NFL.
"For the life of me, I can't understand why I was involved in such pointless activity," Vick said. "Why did I risk so much at the pinnacle of my career?"
Vick said he felt remorse even as he was involved in dogfighting.
"There was a point in my life where I felt it was wrong and I knew it was wrong," he said. "To this day I have to live with that shame and that embarrassment."
Vick, who said he wants to be the "best ambassador to the NFL and community," said he hoped to play in a regular season game soon. He asked for a second chance, but expected he won't be easily forgiven by fans or the general public.
Vick knows he might never be forgiven by some people.
"I understand to a certain degree, but our country is a country of second chances," he said. "I paid my debt to society. I spent two years in prison. ... That was a humbling experience. I can't explain how deeply hurt and how sorry I was."
Eagles owner Jeffrey Lurie said he did serious "soul searching" regarding Vick. The owner said he met with Vick for hours and is convinced he can become a force in stopping animal cruelty.
"I needed to see a lot of self hatred in order to approve this," Lurie said.
But Lurie said if Vick is not proactive in working with the community and the humane society, then his signing will be a "terrible decision."
"There's no third chances and we know that. If it isn't fulfilled the way we expect it to be, then it will be the end," Lurie said.
Commissioner Roger Goodell conditionally lifted Vick's suspension on July 27, allowing him to sign with a team, practice and play in the last two preseason games. Once the season begins, Vick can participate in all team activities except games, and Goodell said he would consider Vick for full reinstatement by Week 6 (Oct. 18-19) at the latest.
The Eagles reached the NFC championship game last season, but are still looking for their elusive first Super Bowl victory.
Vick thanked Reid and Eagles ownership for taking a gamble on him. He also personally thanked McNabb for lobbying the team on his behalf.
"I'm glad that coach Reid and the rest of the organization stepped forward," Vick said. "I'm glad I got the opportunity and the second chance. I won't disappoint."
Asked if some Eagles fans will be angry that the team signed Vick, Reid said, "Not everybody agrees with every decision. I expect the public to have some questions initially."
Reid said he hopes fans will trust that the team did its homework on Vick and signed him because the team believes the quarterback is a changed man who is ready to return to football.
Vick, who said he has no more pets, said he planned to actively work in the community and the humane society to prove he can help more animals than he's hurt.
Vick will practice with the Eagles on Saturday.
"I'm ready to go," he said.
Reid called Vick "one of the greatest quarterbacks" in the league two years ago. With McNabb firmly entrenched as the starter, Vick will have to look at playing another position.
The most likely scenario would be for the Eagles to use Vick in a variation of the Wildcat offense that the Miami Dolphins made popular last season. Vick also is familiar with the West Coast offense, though he ran a different version with Atlanta than the one Philadelphia uses.
Reid did not specifically address how he would use Vick.
"I will say, though, that he will contribute," Reid said. "You can ask defensive coordinators on other teams if they're worried about that."