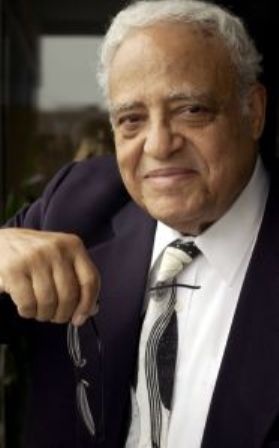 NASHVILLE, Tenn. (AP) -- Benjamin L. Hooks, a champion of minorities and the poor who increased the NAACP's stature as its executive director, died Thursday. He was 85.
State Rep. Ulysses Jones, a member of the church where Hooks was pastor, said Hooks died at his home in Memphis following a long illness.
Hooks became executive director of the NAACP in 1977, taking over a group that was $1 million in debt and had shrunk to 200,000 members from nearly a half-million in the 1950s and 1960s. He pledged to increase enrollment and raise money for the organization.
"Black Americans are not defeated," he told Ebony magazine soon after his induction. "The civil rights movement is not dead. If anyone thinks that we are going to stop agitating, they had better think again. If anyone thinks that we are going to stop litigating, they had better close the courts. If anyone thinks that we are not going to demonstrate and protest, they had better roll up the sidewalks."
By the time he left as executive director in 1992, the group had rebounded, with membership growing by several hundred thousand. To make that happen, he created community radiothons to make the public more aware of activities by local NAACP branches and boost membership.
"He came in at a time the NAACP was struggling and gave it a strong foundation. He brought dignity and strong leadership to the organization," Jones said.
"A hero, an icon, and a Memphis legend. He will be missed," Memphis Mayor A C Wharton said in a post on Twitter.
State Rep. John Deberry, a fellow minister and chairman of the Tennessee Black Caucus, said the loss of Hooks is a sobering reminder that "we are losing an incredible generation of men and women who changed the world."
"And I hope that all these young folks who accept their rights with such a cavalier attitude, those who are disrespectful to their seniors, those who go to these schools and misuse the opportunities ... realize that as these men and women move off the scene, that somebody has to step up," Deberry said. "Somebody has to continue the battle."
Hooks also created an initiative that expanded employment opportunities for blacks in Major League Baseball and launched a program where corporations participated in economic development projects in black communities.
U.S. Sen. Lamar Alexander said Tennessee had lost one of its most distinguished citizens and his family had lost a good friend.
"Ben Hooks was a pioneer, preacher, storyteller, conciliator and visionary," Alexander said. "We will miss him greatly."
President George W. Bush in 2007 presented Hooks with the Presidential Medal of Freedom, one of the country's highest civilian honors.
"Dr. Hooks was a calm yet forceful voice for fairness, opportunity and personal responsibility," Bush said in 2007. "He never tired or faltered in demanding that our nation live up to its founding ideals of liberty and equality."
Nearly two decades earlier, Hooks pleaded with Bush's father, then-President George H.W. Bush, for action on a string of gasoline bomb attacks in the South that killed a federal judge in Alabama and a black civil rights lawyer in Savannah, Ga., in December 1989.
The same month, another bomb was intercepted at an NAACP office in Jacksonville, Fla., and an Atlanta television station received a letter threatening more attacks on judges, attorneys and NAACP leaders.
"We believe that this latest incident is an effort to intimidate our association, to strike fear in our hearts," Hooks said at the time. "It will not succeed. We intend to go about our business, but we will most certainly be taking precautions."
Walter Leroy Moody, now 75, was convicted of the killings and other charges in 1997 and remains on Alabama's death row.
Hooks' inspiration to fight social injustice and bigotry stemmed from his experience guarding Italian prisoners of war while serving overseas in the Army during World War II. Foreign prisoners were allowed to eat in "for whites only" restaurants while he was barred from them.
When no law school in the South would admit him, he used the GI bill to attend DePaul University in Chicago, where he earned a law degree in 1948. He later opened his own law practice in his hometown of Memphis, Tenn.
"At that time you were insulted by law clerks, excluded from white bar associations and when I was in court, I was lucky to be called 'Ben,'" he once said in an interview with Jet magazine. "Usually it was just 'boy.'"
In 1965 he was appointed to a newly created seat on the Tennessee Criminal Court, making him the first black judge since Reconstruction in a state trial court anywhere in the South.
President Richard Nixon nominated Hooks to the Federal Communications Commission in 1972. He was its first black commissioner, serving for five years before resigning to lead the NAACP.
At the FCC, he addressed the lack of minority leadership in media and persuaded the commission to propose a new rule requiring TV and radio stations to be offered publicly before they could be sold. Minority employment in broadcasting grew from 3 percent to 15 percent during his tenure.
He later was chairman of the board of directors of the National Civil Rights Museum in Memphis and helped create The Benjamin L. Hooks Institute for Social Change at the University of Memphis.
In his last keynote speech to an NAACP national convention in 1992, he urged members who had found financial success to never forget those less fortunate.
"Remember," he said, "that down in the valley where crime abounds and dope proliferates ... where babies are having babies, our brothers and sisters are crying to us, 'Is anyone listening? Does anyone care?'"
-----
Associated Press writers Joe Edwards in Nashville, Yvette Blackman in New York, Daniel Yee in Atlanta contributed to this report.