Gulf Residents Protest, Brace Themselves for After Affects of Oil Spill 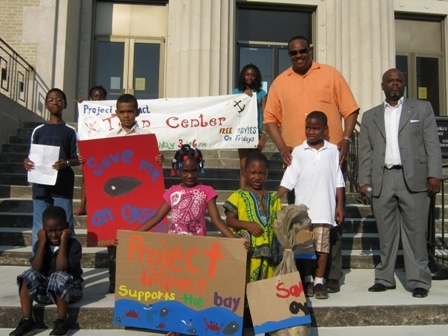 WASHINGTON (NNPA) - Flames coated the water as a cloud of grey and black smoke hovered over the Gulf of Mexico. Carlos Felder could have been one of the eleven men killed in the Deepwater Horizon explosion, but he instead was an onlooker.
Felder stood on the deck of the boat, eying what has now been confirmed as the worst environmental disaster in U.S. history. "I was just waking up and getting ready to start my shift," Felder, a contract worker for Shell energy and petrochemical companies tells, "when I heard the big boom and went out on the deck to see what the big noise was - like everyone else."
Felder describes what he heard and saw as "crazy." He said he could only think about the families of the people who did not make it off the oilrig in time. "Everyone on my vessel wanted to help. But Shell told us to stay put. So all we could do is say a prayer," Felder said. He added that the explosion was so bad, that he does not want to remember anything about it.
Seven weeks later, people around the country – especially costal states - are forced to remember the oilrig explosion as they brace themselves for its aftermath. Businesses take on the straining ramifications of the oil spill. More than ever, the fishing and seafood industries, oil industry, and tourism anticipate loss. 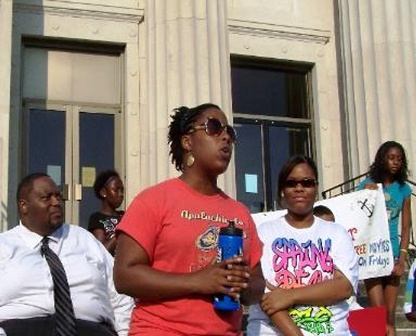 "Many members of my family are commercial fishermen or oystermen. Some have been laid off. Some have to traveled further to oil-free fishing zones," says D.T. Simmons, a legal assistant from Apalachicola, Fla., home to Apalachicola Bay seafood harvesting areas.
With no concrete date of when the leak will be plugged, Simmons is one of many who has tightened up on her financial spending.
"Some family members and friends work in the service and tourism industry ranging in different areas of the Gulf coast. Their … industry financial projections have been greatly reduced, chiefly because of this oil spill," Simmons says.
Harry Alford, President/CEO of the National Black Chamber of Commerce, raised issues about reparations to the victims and cost of the cleanup in a statement titled, "Some Words for President Obama About the Oil Spill," which is posted on the National Black Chamber of Commerce website.
Alford suggests: "Levy BP's bank accounts and freeze its assets. Their 2009 revenue was $246.1 billion and their assets are $236 billion. Thus, take $50 billion in cash to set up an operating account for us to clean up the mess, cap the well and pay the victims. Set aside another $50 billion in their assets as backup. Halliburton and Transocean are much smaller firms so take a billion dollars each from them based on principle."
The oil spill is anticipated to have not only a strong and lingering impact on the U.S. economy, but also on the environment and animal and marine life. Fishes and dolphins have already shown up dead on the coast, which provides a clear indication that the oil has intruded natural habitats. Hundreds of other species are at risk.
Simmons was immersed by the health and environmental residue left after the deadly explosion, and recently organized a march for the Franklin County Democratic Executive Committee to promote preservation awareness of her bay in light of the recent "fiasco." Simmons plans to push her State representatives for stricter legislation regarding safety standards and penalties for violation of rules.
Alford said President Barack Obama and the U.S. government has got to seize control of this and cannot rely on BP for legislative advice. He said BP has received 760 willful safety violations at their U.S. refineries over the last three years.
"They [BP] don't care, they are an outlaw – kick them out of the country and send them back to England," Alford said in an interview.
Tony Hayward, BP's CEO, said in a televised statement that BP is taking full responsibility for cleaning up the spill in the Gulf. "We will get this done and we will make this right," he said.
Community residents of the five Gulf states - Texas, Louisiana, Mississippi, Alabama, and Florida - have obvious health concerns about the food they eat and the air they breathe.
"It could get into the local drainage systems and water systems of local communities if it comes inland enough and can begin to cause sickness among people using public water systems, as it has among marine life," speculates Pensacola, Fla. resident, Kavontae Smalls.
But, those concerns are being dispelled by the Centers for Disease Control and Prevention and partnering organizations.
The CDC said in a June 11 update that it is monitoring potential health threats or conditions across the five Gulf states that may arise as a result of human exposure to the oil spill. The agency says it is in constant communication with its state partners and has a standing commitment to quickly support and respond to any emerging health threats.
The people will also be watching, assures Simmons in a statement: "The FCDEC will work hand-in-hand with the people in the local seafood industry and state and national environmental protection agencies to promote to help protect our pristine waters."