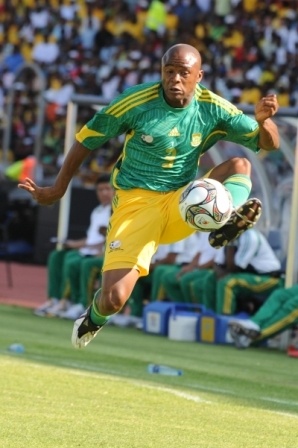 HEIDELBERG, South Africa (AP) -- With the World Cup in full swing in South Africa, many rugby-obsessed Afrikaners are embracing soccer like never before.

But because rugby is so deeply rooted in the Afrikaner culture, its pre-eminent status will surely be restored once the world's most popular soccer tournament ends on July 11.
``I just know more about rugby so I would naturally rather watch a rugby match,'' said Zanele Smit, an 18-year-old student in Heidelberg, a small town of mostly Dutch-descended Afrikaners near Johannesburg. ``But I am feeling it. The spirit of the people and the vuvuzelas that the World Cup brought are truly brightening up my days.''
When South Africa won the bid to host the World Cup in 2004, many Afrikaners didn't care. But as the tournament drew closer, more and more South African flags started to pop up on Afrikaner-owned cars and people even started wearing the Bafana Bafana shirt.
``The fact that South Africa is hosting the World Cup has increased my interest in football,'' said Francois de Kock, a 20-year-old law student. ``Usually, I could not really be bothered if the United States and England played against each other as Germany is my team. But since the World Cup is being hosted in South Africa, I find myself watching every match.''
The World Cup opened on Friday at Soccer City, a rebuilt stadium closer to the black township of Soweto than downtown Johannesburg.
Soccer has always been more popular among the majority black population, but it was former president Nelson Mandela who is credited by many for making South Africa a multiracial country when he attended the 1995 Rugby World Cup final at Ellis Park and congratulated former captain Francois Pienaar while wearing a green Springboks shirt.
That win opened a new era for South African sport, with the expectation that whites and blacks would participate in and support different sports together.
It seems to be working for the World Cup.
``I definitely care more about football with the World Cup here in South Africa,'' said Jaco Swartz, a 33-year-old lawyer. ``I would rather watch rugby than soccer, especially if it's the Springboks playing. But I'm proud of Bafana and I will keep supporting them even after the World Cup is over.''
Since the end of apartheid and the Afrikaner-led National Party in 1994, when international sanctions against South Africa's sports teams were lifted, the country appeared to be divided among racial lines, with most white people choosing rugby. But interest in South African soccer is growing among Afrikaners.
``I would rather watch football than rugby if I had to choose,'' said Anneke Gouws, a teacher from Heidelberg. ``I am definitely more aware of what is going on in football with the start of the World Cup in South Africa.''
After their opening match, a 1-1 draw with Mexico, Bafana Bafana -- as the national team is known -- still have a good chance to advance to the knockout round. And many Afrikaners have even been seen blowing on their vuvuzelas -- the loud plastic trumpets that have become a symbol of the World Cup.
But the national soccer team will be hard-pressed to live up to the standards of the Springboks, who won the Rugby World Cup in 1995 and 2007.
``The Springboks perform much better than Bafana Bafana internationally,'' De Kock said. ``Rugby is a much more exiting game as there are more goals scored regularly.''