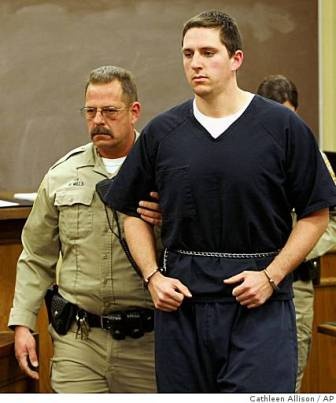 LOS ANGELES- The prosecution has given its final argument in the murder trial of a former BART officer, accused of killing an unarmed black man on a train platform. The defense will finish its closing Friday before the case heads to the jury.
There's no excuse for shooting an unarmed man in the back, a prosecutor said Thursday, but that is exactly what Johannes Mehserle did early Jan. 1, 2009, and as a result he should pay the consequence.
"It can never be lawful to shoot an unarmed man when that unarmed man is lying facedown in the process of attempting to place his arms behind his back," Deputy District Attorney David Stein said. "That is the bottom line."
The Skanner News video click here
In a more than two-hour-long closing argument, which included at least two videos capturing the then-BART police officer shooting Oscar Grant III on Oakland's Fruitvale BART station platform, Stein urged a Los Angeles jury to convict Mehserle of second-degree murder.
Stein dismissed Mehserle's defense that he confused his gun for his Taser. Stein told the jury that evidence in the case proves beyond a reasonable doubt that Mehserle wanted to use his gun to shoot Grant.
"He lost all control, and that's why you are here," Stein said of Mehserle. "In this case, the defendant's desire to punish, his desire to mistreat, his desire to belittle Mr. Grant resulted in the death of an innocent person, and for that he must be held liable."
Mehserle, now 28, and then-BART police Officer Anthony Pirone were attempting to handcuff Grant when Mehserle shot the 22-year-old Hayward man. Mehserle testified that he wanted to use his Taser because he thought Grant was resisting arrest and might be reaching for a gun, but Mehserle said he pulled his gun by mistake.
Stein, however, scoffed at the notion that Grant resisted arrest or that Mehserle even believed Grant was trying to reach for a gun. Instead, Stein said, Mehserle along with defense attorney Michael Rains and other BART police officers were engaged in a conspiracy to stretch the truth in order to justify a murder.
"This is what they have to do. They have to fit the defense around the facts," Stein said. "It's like putting a square peg into a round hole."
Stein chastised Mehserle's explanation for the killing, asking the jury to think about why the former officer never told fellow officers after the shooting that it was an accident. He also asked the jury to consider why Mehserle would stand up and release his hold of Grant if he truly believed Grant was reaching for a gun.
"The last thing you want to do is to create distance. You want to be on that person like white on rice," Stein said. "You are going to be on that person to make sure that gun is not coming out."
Although the jury also is allowed to find Mehserle guilty of voluntary manslaughter or involuntary manslaughter, Stein focused his initial closing argument on second-degree murder. Stein will get the last word with another closing argument after Rains completes his closing arguments.
Rains began his arguments by reminding the jury that they cannot have reasonable doubt in finding Mehserle guilty of any crime. Rains also reminded the jury that it cannot consider public opinion or previous injustices as reasons to find his client guilty.
"This is not a forum to address or redress social injustices or racial injustices," Rains said. "Your duty as jurors is not to render a verdict as some sort of commentary on the state of relations between police and the community."
Rains barely began to discuss evidence in the case when the court's noon lunch break arrived, but in the hour he had to discuss his side of the case, Rains repeatedly reminded the jury that reasonable doubt exists.
"There is nothing to suggest an intent to kill. Nothing," Rains said.
"Not a bit of (evidence) shows he intended to draw and fire his gun.
"He was trying to tase Mr. Grant. That is what we have been talking about for three weeks."