By Helen Silvis of The Skanner News
Published: 15 April 2010 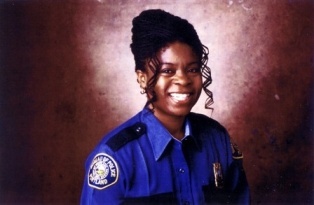 Portland Police Officer Victoria Burton, formerly Victoria Wade, has seen hundreds of families struggle to deal with trauma and loss. As the founder and leader of the police Crisis Response Team, Burton helped families through some of the worst moments of their lives – a sudden death, a murder, a suicide or violent assault.


This month she is asking some of those families to come to her retirement reception so that she can thank them personally for their courage. The reception will be held Friday, April 23 from 2 – 4 pm at Emmanuel Temple, 1033 N. Sumner.
"I don't know how to reach so many people and I would really like to thank them for the inspiring effect they had on my life," Burton told The Skanner News. "None of us know the time or the day that we may lose a loved one in a traumatic incident."
Burton is retiring from the police department this month after serving since 1981. Before starting to develop the crisis team in 1993, she worked on patrol in North and Northeast Portland, as a minority recruiter, with gang affected youth,  on the drugs and vice division as a narcotics officer and on the community services division, where she and her partner attempted to reunite runaways and prostitutes with their families.
"I believe that every one of those experiences prepared me for the crisis team," she said. "I don't feel I chose to do this work, but that I was chosen."
The crisis team partnered with volunteers from Portland's African American, Latino, Asian/Pacific Islander, Gay and Lesbian communities to train and prepare multi-disciplinary, cross-cultural teams to work with families dealing with trauma. Not everyone in the bureau agreed with the approach. "It took time for the nureau to accept the program," Burton said.
While Burton was coordinating the crisis response team, it was dispatched to more than 450 call outs.
In 1997, the program was nominated for a president's award, and police departments in Atlantic City and New York City used the model to create similar programs.
Officer Burton too, has received several awards for her work including the Nathan Thomas award in 1997, the Portland Police Bureau's commendation medal and the Albina Ministerial Alliance Frontline Soldier award. In 2004 the Oregon Commission for Women named her one of their Women of Achievement.
What's next for Burton? She and her Jamaican-born husband – a musician with the reggae band Live Wyaa, are heading to Jamaica for a while to play music and lie in the sun.