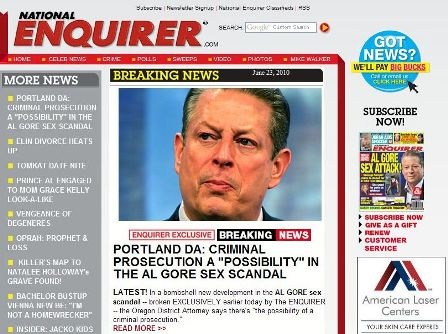 Portland Police today released their report on alleged sexual abuse in 2006 by former Vice President Al Gore against a massage therapist in a downtown Portland luxury hotel.
The story, which was broken this week by the National Enquirer, has also been investigated by the Portland Tribune, which filed a records request with the police bureau to obtain the documents released Wednesday.
The identity of the massage therapist has not been revealed. It appears that the alleged incident took place as Gore was touring the country with a slideshow about global warming – which eventually grew into the Academy Award-winning film, "An Inconvenient Truth."
The story has particular resonance because Gore and his wife of many years, Tipper, split up this spring -- amid much speculation that their relationship was a solid counterpoint of fidelity compared to that of former President Bill Clinton and his wife, Hilary.
The records show that Gore was investigated by the Portland Police sexual assault detail, but that the alleged victim declined to be interviewed by officers until January of last year.
Read the Portland Police report about the alleged sexual abuse here

A national tabloid magazine has published a story discussing allegations made by a Portland woman against former Vice President Al Gore. The Portland Police Bureau does not generally disclose information regarding sex crimes, as they are deemed confidential. However, because of the high-profile nature of this case and the fact that the woman involved provided reports to a media outlet, we will provide the following information:
In December 2006, a local attorney contacted the Portland Police Bureau and said he had a client that wanted to report an unwanted sexual contact by Mr. Gore. This allegation stemmed from an incident on October 24, 2006, when the woman involved, a Licensed Massage Therapist, was called to a local hotel to provide a massage to Mr. Gore.
After repeated attempts by Portland Police Detectives to interview the woman involved, the Police Bureau was told by her attorney in January 2007, that they were pursuing civil litigation and declined the assistance of the Portland Police Bureau's Detective Division. A special report was written and the case was exceptionally cleared—a standard procedure when the person involved declines to talk to police. The District Attorney's Office was consulted during this time.
On January 6, 2009, the woman involved came to the Detective Division and explained that she would like to give a statement. On January 8, 2009, a Detective and a victim advocate assigned to the Sexual Assault Detail met with the woman. The woman read from a prepared statement and detailed the events of October 24, 2006. She reported that she was repeatedly subjected to unwanted sexual touching while in his presence.
The woman reported that she still had clothes that she had worn during the encounter. But due to the description she gave of the incident, detectives did not collect the clothes as evidence because they did not feel there was any evidentiary value to the clothing.
After interviewing the woman, the Police Bureau provided additional services per the victim advocate program. The case was not investigated any further because detectives concluded there was insufficient evidence to support the allegations.
In June 2010, the woman involved contacted Detectives and asked for a copy of her statement, which she was given. She then asked if she could edit her statement and was told she could provide detectives with additional clarifications that would be added to her original report. She also advised that she was going to take the case to the media.
The District Attorney's Office has a copy of the reports. At this point, the Police Bureau does not consider this an ongoing investigation unless new evidence is received in this case.
The Police Bureau is releasing the redacted reports concurrent with this news release. In 2007, the Police Bureau released the initial special report regarding the incident after it received a public records request by the Portland Tribune.