By Edith M. Lederer of the Associated Press
Published: 22 September 2010 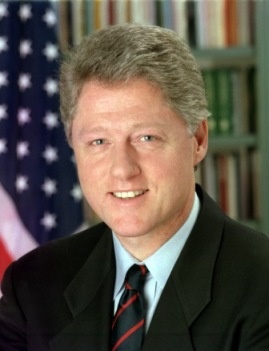 NEW YORK – Bill Clinton asked the American people Wednesday to give the Democrats two more years to dig the country out of the economic hole he blamed on the Republicans — and then, if the Democrats fail, "throw us all out."
The former president said in an interview with The Associated Press that the Democrats can still pull the November midterm elections out of the fire if they go on the offensive.
The Democrats won "a lot of exceedingly marginal seats" in the last two elections and have to assume they will lose some of them this year, but "whether these elections will be a big setback for the Democrats is yet to be determined," he said.
"If the Democrats can make this a choice, not a referendum, they can win," Clinton said. "If it's a referendum on anger, apathy, laced with amnesia, they're going to have a problem."
He urged Democrats to start countering GOP claims with facts and statistics demonstrating what President Barack Obama's administration has done to avert a more severe downturn and what Republican promises to roll back key legislation would mean for voters.
"I think the Democrats ought to stand up and say ... 'You gave them eight years to dig this hole, and to double the debt of the country, and not to produce any jobs, and then to have a financial collapse and all this calamity. At least give us four to dig out of it,'" Clinton said.
"If we're wrong, throw us all out. But don't bring back the people that dug the hole."
Clinton spoke in a lengthy telephone conversation from the Clinton Global Initiative, a conference that brings together leaders from government, business and philanthropy who make financial commitments to reduce poverty and disease around the world. Obama and his wife, Michelle, are expected to address the closing session on Thursday.
Democrats are facing a wave of voter anger over the struggling economy, and the Republicans appear poised to gain seats and possibly control of the House, and pick up seats in the Senate, too. That could position them to block virtually any Obama initiatives in the next two years.
In the next five weeks, Clinton said, the Democrats need to answer the two key GOP arguments — that they should be thrown out because they haven't reversed the fallout from the global financial crisis, and that the Obama administration is spending too much and trying to turn the U.S. into "some big European-style social democratic bureaucracy."
Clinton said it is important for Democrats to tell voters that "we didn't get out of the hole, but we have stopped digging." The U.S. has recovered 70 percent of the income growth it lost in the 2008 global financial meltdown, he said. In contrast, Germany has recovered 60 percent, Japan 50 percent and Britain 30 percent.
"We got into this mess because there was too much risk and too little oversight," Clinton said. The Republicans want to repeal the Obama administration's financial oversight legislation "and let the interest groups go back to basically gambling not only with their future but ours."
He said Democrats need to make the case that the $800 billion stimulus package provided a modest tax cut for many people and enabled state and local governments to avoid layoffs of teachers and health care workers.
"I think we ought to defend the stimulus," Clinton said. "The hole was $3 trillion. Two-thirds of the stimulus was not designed to get us out of the hole. It was designed to help us tread water so we didn't drown."