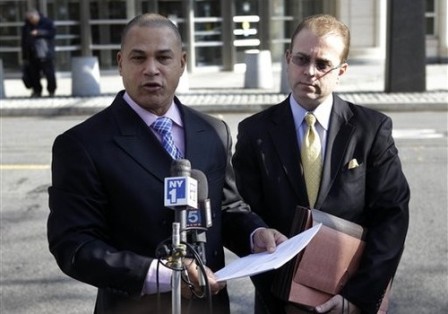 If taxi drivers take the advice of New York State Federation of Taxi Drivers President Fernando Mateo, Mateo might not be able to catch a cab if he wears a hoodie this winter in New York City .

Mateo's words were simple after an incident involving a livery cab driver in Queens who was shot multiple times by a Latino male suspect: "Profile your passengers." The message is especially shocking being that Mateo himself is half Black and half Latino.

The words stem from the shooting of 58-year-old livery cab driver Trevor Bell, who was recently shot six times in the neck and legs. The alleged suspect was a 22-year-old Latino male who was caught on a surveillance camera in the cab, with footage showing his face and him aiming a gun. The suspect made off with less than $100. Police have made no arrests.

The taxi union boss made the statements during a press conference in Queens outside Jamaica Hospital , where Bell is clinging to life. Mateo said that racial profiling was sometimes a "good thing."

"I don't care about racial profiling," he said. "Because the God's honest truth is that 99 percent of the people that are robbing, stealing, killing these drivers are Blacks and Hispanics. So, if you see suspicious activity, you know what? Don't pick up that person."

Known for his strong support of right-wing Republicans, Mateo said that he is not racist and that he is simply advising drivers to be more careful in certain parts of the city and to be vigilant concerning customers wearing hoodies.

Mateo's statements received a quick backlash from various groups and leaders in the community. Those who condemn his advice to drivers say that Blacks and Latinos already have a hard time catching cabs in New York City .

The Rev. Al Sharpton said in one TV news report that Mateo "exacerbates the problem" and "racial profiling is never justified."

David Yassky who serves as the Taxi and Limousine commissioner, said Mateo's advice to drivers was "down right wrong and simply unacceptable," according to a statement.

At a press conference held on the steps of City Hall, several Black and Latino organizations spoke out against Mateo's words, including the National Congress for Puerto Rican Rights, the New York Taxi Workers Alliance, and the Labor Council for Latin American Advancement.

"His statement that livery cab drivers should racially profile passengers is not illegal—it's outright insane given the fact that people who are serviced by livery cabs are people of color," said David Galaraza of the Labor Council for Latin American Advancement. "We are trying to end the practice of racial profiling at the NYPD and other law enforcement agencies. For a Latino to put something out so simplistic—it just made no sense whatsoever to put out a call like that at a time when we are trying to stop these practices."

City Councilman Charles Barron was also at the press conference and pointed out that the real issues at hand are a rise in crime and a need for jobs and economic improvement in poor neighborhoods, where many livery cabs get business.

He said, "Racial profiling is a crime. It's unconstitutional and it's illegal. You can't fight crime with racism. He's talking out of his head. I wear a hood in the winter, so I can't get into a car service?"