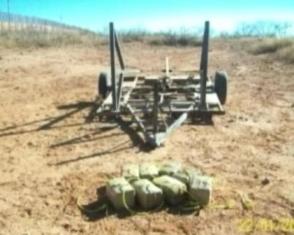 HERMOSILLO, Mexico (AP) — Drug smugglers are using an ancient invention as a new way to move marijuana across the border from Mexico to Arizona. The Skanner News Video: Raw video of catapult

The discovery of two "drug catapults" in the Mexican state of Sonora marks the latest twist in the cat-and-mouse game traffickers play with authorities.

A Mexican army officer says the 3-yard (3-meter) tall catapult was found about 20 yards (20 meters) from the U.S. border on a flatbed towed by a sports utility vehicle.

The smugglers left before they could be captured. The surveillance video of them using the catapult was released Wednesday.

A second catapult was discovered Thursday in near Agua Prieta, another border town. Another army officer in that area said an anonymous tip led soldiers to the scene and the catapult was similar to the first.

Mexican officials say it is the first time they have seen this smuggling method used by local traffickers.