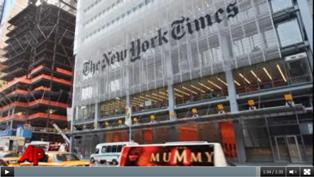 The Times reported on its website that the four were captured by forces loyal to Moammar Gadhafi and will be released Friday.

The Times said his son, Seif al-Islam Gadhafi, gave the information to Christiane Amanpour in an ABC News interview. A Times spokeswoman said the newspaper had no immediate comment.

Libyan government officials told the U.S. State Department on Thursday evening that all four would be released.

They had last been in contact with editors on Tuesday from the northern port city of Ajdabiya where they were covering the retreat of rebels.

The journalists are Anthony Shadid, The Times' Beirut bureau chief and a two-time Pulitzer-prize winning foreign correspondent; two photographers, Tyler Hicks and Lynsey Addario, who have extensive experience in war zones; and a reporter and videographer, Stephen Farrell, who in 2009 was captured by the Taliban in Afghanistan and was rescued by British commandos.

The journalists and their families could not immediately be reached for comment.

Shadid had worked previously for The Associated Press, Washington Post and Boston Globe. He won the Pulitzer Prize for international reporting in 2004 and 2010 for his coverage of Iraq.

Addario also has worked for National Geographic and Time magazine and was part of the New York Times team that won the 2009 Pulitzer Prize for international reporting. She won a MacArthur Fellowship, known as the "Genius Grant," in 2009.