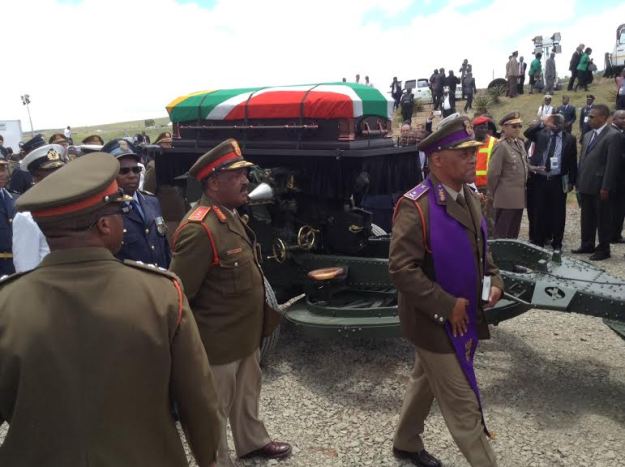 The former Nobel Prize-winner, in accordance with his wishes, was buried in a family graveyard high in rolling green hills where other close relatives are buried, including his father, Makgatho Mandela, who died in 2005; his eldest son, Madiba Thembekile, who died in an automobile accident in 1969; and Makaziwe Mandela, his first daughter who died as an infant in 1948.

In his autobiography, Long Walk to Freedom, Mandela described Qunu as a place where “I spent the happiest years of my boyhood and whence I trace my earliest memories.”

To pay tribute to Mandela, leaders and celebrities from around the world made their way to this bucolic community in the eastern section of the country to share their memories of the global icon. Among those attending were Britain’s Prince Charles; media mogul Oprah Winfrey, who was escorted by longtime beau Stedman Graham; civil rights leader Jesse Jackson, Archbishop Emeritus Desmond Tutu, Virgin Airlines founder Richard Branson and British actor Idris Elba, who plays Mandela in the movie, “Long Walk to Freedom.”

Guests attending the funeral were transported from a park-and-ride facility at Walter Sisulu University to a makeshift white dome-like auditorium covered in white sheathing. Because seating was restricted to 4,500 accredited guests, many local residents complained that they were relegated to the background, forced to watch the funeral of their most celebrated son on television.

To ease complaints about exclusion, the government set up 16 broadcast viewing areas across the country for viewing and collective mourning. The state funeral and parts of the burial were broadcast live in South Africa and around the world.

The funeral followed a memorial service last Monday and three days of Mandela lying in state at the Union Buildings in Pretoria, where his body was viewed by more than 100,000 people. Because of long lines and hours too short for the occasion, at least twice as many people might have viewed the body through Friday if they had been given the opportunity.

After a final ceremony Saturday morning at the Union Buildings in Pretoria, Mandela’s coffin was flown to Mthatha where it was met by a military escort and greeted by locals with three shouts of “Aaah! Dalibhung,” a reference to Dalibhunga, the name given to Mandela at 16 upon being initiated into adulthood.

His remains were transported to Quna, 37 miles away. There, military officials handed over his remains to village elders in his old home. The South African flag that draped his coffin was replaced with a lion skin, a traditional symbol of the Xhosa people. Tribal leaders and men in his family held a private vigil at dusk in keeping with traditions of Mandela’s Thembu clan. His remains stayed in his bedroom throughout the night, overlooking his future grave site.

Unlike Saturday’s final public ceremony in Pretoria, in which tributes were paid by personalities from around the world before Mandela’s remains were flown here, Sunday’s funeral was an all Africa affair.

President Zuma delivered the eulogy with Mandela’s flag-draped casket resting in front of him. Zuma said, “As your journey ends today, ours must continue in earnest. One thing we can assure you today, Tata, as you take your final steps, is that South Africa will continue to rise. We pledge to take your vision forward.”

As the first president elected with the participation of Black voters, Mandela is considered the father of the country. Hence, the numerous references to “Tata,” which means father. He is also referred to as Madiba, his clan name.

Malawian President Joyce Banda praised Mandela at the funeral as an ideal leader.

When African National Congress (ANC) Deputy President Cryil Ramaphosa tried to shorten Kaunda’s speech by slipping him a note, the former president told the audience, “This boy is trying to control me. He doesn’t know that I fought the boers.”

Uncontrolled, Kaunda continued, “As we go on without Madiba, he’s no more in terms of his life, but he is still with our leaders. His lessons remain with us, to guide us. Remember, Madiba also told us to love our neighbors as you love yourself.”

Following the Thembu custom of an elder’s funeral, an ox was slaughtered on the day of the burial to accompany the spirit of Mandela to his ancestors.

After the funeral, soldiers in their dress uniforms placed the casket on a gun carriage and marched with it several hundred yards up a steep hill to the burial site. Only 450 people, most of them international leaders and high-ranking ANC officials, were allowed to attend the burial.

Helicopters adorned with South African flags hovered above. About a dozen Pilatus PC-7 aircrafts streaked across the clear skies in formation. Mandela’s coffin was placed over his grave and soldiers folded the South African flag that had rested on the casket.

“We will remember Nelson Rolihlahla Mandela,” he said. “Rest in peace. Yours was truly a long walk to freedom and now you have achieved the ultimate freedom in the bosom of your leader, God Almighty.”

A fly-over was accompanied by a 21-gun salute. A trumpeter softly played the “Last Post” as the body was being lowered into the ground

Over 10 days of public mourning, Mandela was repeatedly praised for his spirit of forgiveness and his unique ability to unify people with opposing views. It was a lesson warring relatives were able to put into practice only after Mandela died on Dec. 5 at the age of 95.

Like the children of Dr. Martin Luther King, Jr., certain family members had been feuding with  one another. The rift spilled over into public view while Mandela was seriously ill.

In 2011, Mandla Mandela, the former president’s oldest grandson and the nephew of Makaziwe, one of Mandela’s daughters, had the remains of his father, an uncle and an aunt exhumed without the family’s permission and moved from Qunu to Mvezo, where he is a chief and President Mandela was born.

His mother, Makaziwe, then obtained a court order to have the remains returned to Qunu, where Nelson Mandela was buried Sunday.

In addition, Makaziwe and Zenani Mandela, her stepsister and daughter of Winnie Madikizela-Mandela, teamed up to sue Attorney George Bizos for allegedly misusing funds from Nelson Mandela’s trust. The complaint was eventually withdrawn.

Unlike the King siblings, the Mandelas have been able to put their differences aside, thanks to the prodding of Nelson Mandela’s widow, Graca Machel.

In a television interview with SABC, Makaziwe said: “You know Tata always talked about forgiveness, and that’s the spirit that I have to try to cultivate in this family. During this sad period, we all have to pull together and hold each other’s hands and we have to be united and be able to forgive each other.”