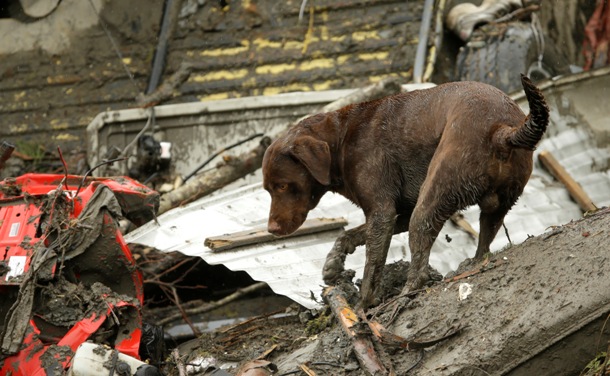 In this Wednesday, April 16, 2014, photo, a search dog works through a pile of debris as the search continues for the remaining missing victims of the massive deadly mudslide that hit the community of Oso, Wash., on March 22, 2014. President Barack Obama plans to visit the area on Tuesday, April 22, to survey the damage and meet with victims, first responders and recovery workers. (AP Photo/Ted S. Warren)

Obama will stop while on his way to the Asia-Pacific region for a four-country trip that begins Wednesday in Tokyo.

While in Washington state, Obama will also visit with victims of the deadly March 22 disaster, emergency responders and recovery workers.

The massive mudslide killed at least 41 people and buried dozens of homes in the small town of Oso, which is about an hour northeast of Seattle.

The Snohomish County medical examiner's office has identified 39 of the victims, with two not yet identified. Four names remain on a list of missing people.

Crews continue to dig through the wreckage in a search for bodies, focusing on a small area where the final four victims are believed to be buried.

At the request of Gov. Jay Inslee, Obama earlier this month declared that a major disaster had occurred in the state, making it and affected residents eligible for various forms of financial aid, including help covering the costs of temporary housing, home repairs and the loss of uninsured property. The Homeland Security Department, the Federal Emergency Management Agency and the Army Corps of Engineers are also helping.

Obama recently asked the nation to send its thoughts and prayers to the state and to Oso.

"We know that part of this tight-knit community has been lost," Obama said last month while attending a European summit just days after the tragedy struck. "We hope for the best, but we recognize this is a tough situation."

After the Oso visit, Obama continues on to the Asia-Pacific region, where he is scheduled to spend the rest of this week and part of next week conferring with the leaders of Japan, South Korea, Malaysia and the Philippines.