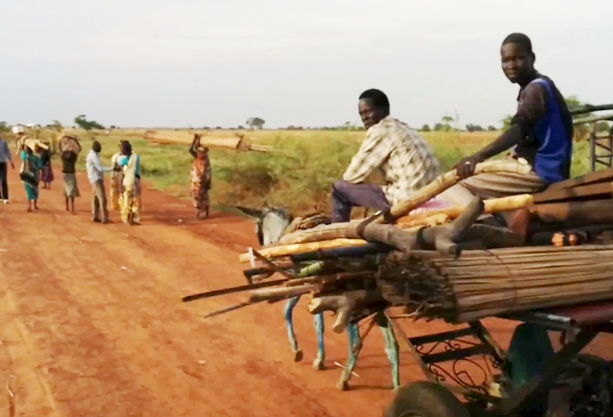 In this image taken from video people travel on the road near Bentiu South Sudan on Sunday April 20, 2014. U.N.'s top humanitarian official in south Sudan Toby Lanzer told The Associated Press in a phone interview Tuesday April 23, 2014, that the ethnically targeted killings are “quite possibly a game-changer” for a conflict that has been raging since mid-December and that has exposed longstanding ethnic hostilities. There was also a disturbing echo of Rwanda, which is marking the 20th anniversary this month of its genocide that killed 1 million people. “It's the first time we're aware of that a local radio station was broadcasting hate messages encouraging people to engage in atrocities,” said Lanzer, who was in Bentiu on Sunday and Monday. “And that really accelerates South Sudan's descent into an even more difficult situation from which it needs to extract itself.” (AP Photo/Toby Lanzer, United Nations)

NAIROBI, Kenya (AP) — The U.N. Security Council on Thursday expressed “horror” at the recent massacre of several hundred civilians in South Sudan, while the U.S. ambassador to the world body said she fears a deepening human catastrophe.

The strongly worded Security Council statement deplored the killings last week in Bentiu, the capital of oil-producing Unity state, as well as the use of radio broadcasts to “foment hate and sexual violence.” It said council members may be willing to impose sanctions if attacks on civilians continue.

“The world's newest state is clearly on a precipice,” said U.S. Ambassador Samantha Power, who demanded that the nation's leaders end the violence. “Failure to take bold action now very well could push South Sudan into a cycle of retaliatory ethnic killing, a deepening civil war, and an even more devastating humanitarian catastrophe.”

The condemnations come about 10 days after rebel fighters from the Nuer ethnic group took control of Bentiu and slaughtered non-Nuer civilians in the town mosque, the hospital and on streets, leaving “piles and piles” of bodies, according to the U.N.'s top aid official in the country.

Melker Mabeck, the outgoing head of the International Committee of the Red Cross delegation in South Sudan, called the conflict's ethnic component worrying.

“Because it can reach a point where the political efforts that we hope make progress might be overrun by these kinds of dynamics, so that even if a political solution is found the rifts between the different ethnic groups is too wide to bridge,” he said.

President Salva Kiir fired the country's top military officer, Chief of Staff Gen. James Hoth Mai, further isolating the Nuer group politically. Mai is Nuer and his command position, which he held since 2009, was frequently cited as an example of the ethnic diversity of the government led by Kiir, an ethnic Dinka.

“The move will make many Nuer who remain with the government nervous,” she said.

Kiir also relieved his director of military intelligence, a Nuer, following his testimony at a recent treason trial that appeared to politicize the army, said Copeland. The newly named replacements are Dinka, like the president, she said.

Col. Philip Aguer, South Sudan's military spokesman, noted that chiefs of staff are posts not for life, and that the military implements the president's decisions. It is only the second change in the top military position since 2005, Aguer said.

A spokesman for the rebels, Brig. Gen. Lul Ruai Koang, said the firing of Mai and the director of military intelligence “marks the beginning of an imminent bloodbath, escalation and regionalization of the conflict.”

“Kiir has finally unplugged the last safety valve and glue that had partially kept together his faltering regime in the last four months,” Koang said.

Aguer reported battles in Jonglei state on Wednesday around the town of Renk, which he said is in the military's control. The rebels say they now control Renk. It was impossible to immediately reconcile the accounts.

The situation in Bentiu remains calm but the city is in rebel control, he said.

Violence has been raging in South Sudan since mid-December, when Kiir accused Machar of leading a coup. About 1 million people have fled their homes and an unknown number have been killed. Most estimates are in the thousands.

“Who knows how many are killed? Nobody knows,” Mabeck said in an Associated Press interview Thursday in Geneva, where he was briefing Red Cross officials. “I think it's likely to get worse before it gets any better,” he said.

South Sudan became the world's newest country in 2011 when it cleaved off from larger Sudan after a referendum. Enmities between ethnic groups have been longstanding.