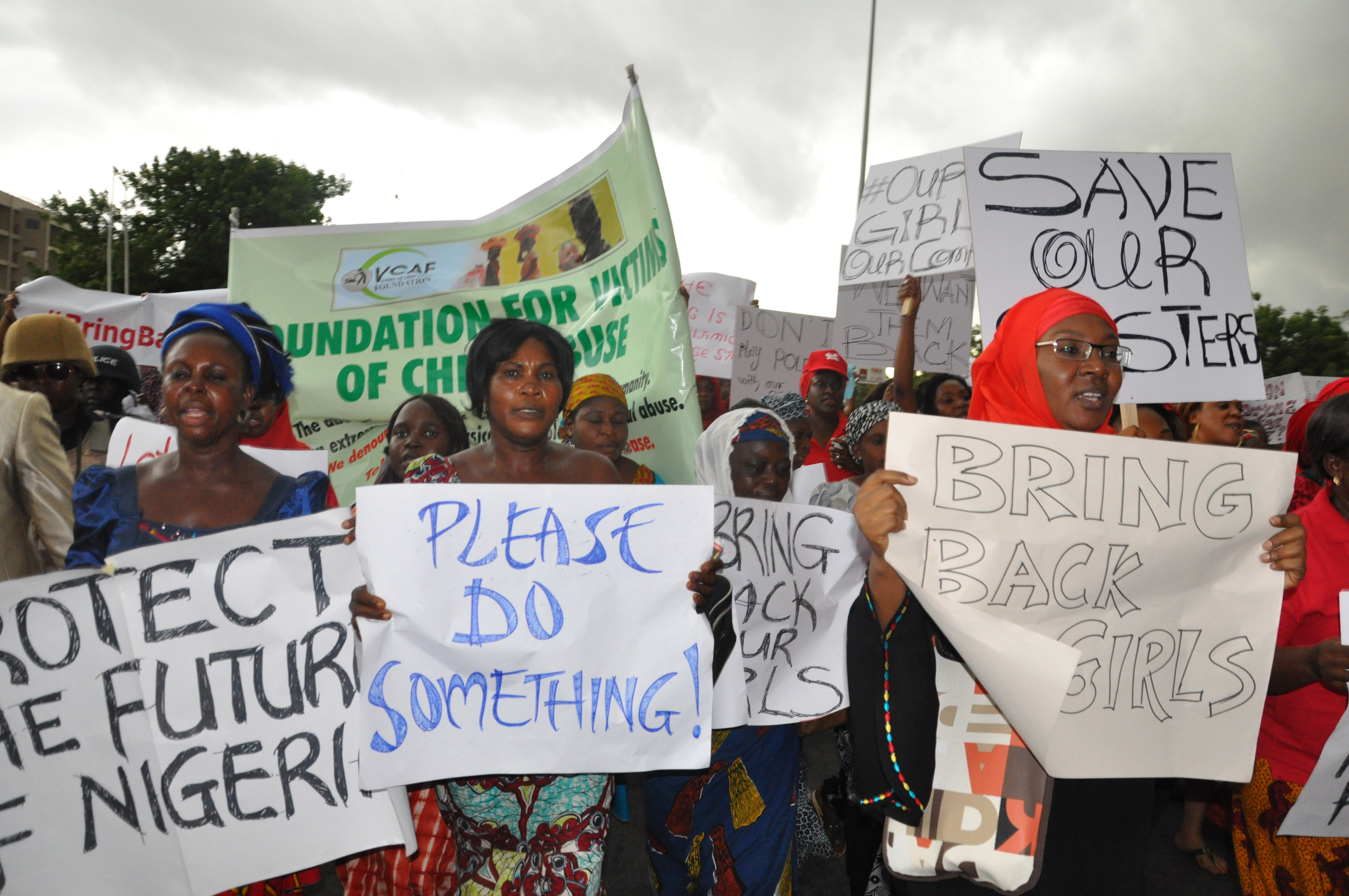 In this Wednesday, April. 30, 2014 file photo, Women attend a demonstration calling on the government to rescue kidnapped schoolgirls of a government secondary school Chibok, in Abuja,Nigeria's President Goodluck Jonathan met through the night with security, school and state officials and issued a new directive that "everything must be done" to free the 276 girls kidnapped by Islamic extremists, one of his advisers said Sunday, May 4, 2014. It was the first time the president met with all stakeholders, including the principal of the Chibok Government Girls Secondary School where the girls and young women were kidnapped in a pre-dawn raid April 15, presidential adviser Reuben Abati told reporters. (AP Photo/ Gbemiga Olamikan, File)

LAGOS, Nigeria (AP) — Nigeria's Islamic extremist leader threatened in a videotaped statement seen on Monday to sell the more than 200 teenage schoolgirls abducted from a school in the remote northeast of the country three weeks ago.

Abubakar Shekau for the first time also claimed responsibility for the April 15 mass abduction, in a video reviewed by The Associated Press.

"I abducted your girls," said the leader of Boko Haram, which means "Western education is sinful.

"By Allah, I will sell them in the marketplace," he said in the hour-long video that starts with fighters lofting automatic rifles and shooting in the air as they chant "Allahu akbar!" or "God is great."

It was unclear if the video was made before or after reports emerged last week that some of the girls have been forced to marry their abductors — who paid a nominal bride price of $12 — and that others have been carried into neighboring Cameroon and Chad. Those reports could not be verified.

An intermediary who has said Boko Haram is ready to negotiate ransoms for the girls also said two of the girls have died of snakebite and about 20 are ill. He said Christians among the girls have been forced to convert to Islam. The man, an Islamic scholar, spoke on condition of anonymity because his position is sensitive.

Nigeria's police have said more than 300 girls were abducted. Of that number, 276 remain in captivity and 53 escaped.

The mass abduction and the military's failure to rescue the girls and young women has roused national outrage with protests in major cities. Protesters accused President Goodluck Jonathan of being insensitive to the girl's plight.

First lady Patience Jonathan fueled anger Monday when a leader of a protest march said she ordered the arrests of two protest leaders, expressed doubts there was any kidnapping and accused the protest leaders of belonging to Boko Haram.

It was unclear what authority Mrs. Jonathan would have to give such orders, since there is no office of first lady in the Nigerian constitution.

The first lady's office denied there were any arrests.

But Saratu Angus Ndirpaya of Chibok town said State Security Service agents drove her and protest leader Naomi Mutah Nyadar to a police station Monday after an all-night meeting at the presidential villa in Abuja, the capital. She said police immediately released her but that Nyadar remains in detention. Deputy Superintendent Daniel Altine, police spokeswoman for Abuja, said she had no information but would investigate.

On Sunday night, Jonathan said his administration is doing everything possible. On Friday he created a presidential committee to go to the affected Borno state to work with the community on a strategy for the release.

Some girls who have escaped from the mass kidnapping said their captors identified themselves as Boko Haram.