Nichelle Nichols, Lt. Uhura on ‘Star Trek,’ Has Died at 89 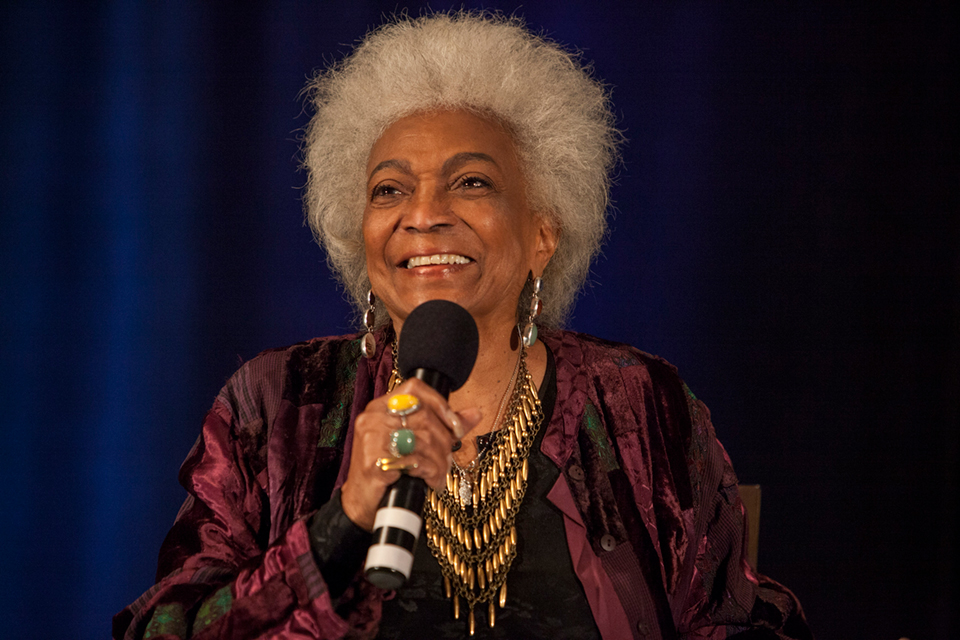 Nichelle Nichols, who broke barriers for Black women in Hollywood as communications officer Lt. Uhura on the original “Star Trek” television series, has died at the age of 89.

“Last night, my mother, Nichelle Nichols, succumbed to natural causes and passed away. Her light however, like the ancient galaxies now being seen for the first time, will remain for us and future generations to enjoy, learn from, and draw inspiration,” Johnson wrote on her official Facebook page Sunday.

“Hers was a life well lived and as such a model for us all."

Her role in the 1966-69 series earned Nichols a lifelong position of honor with the series’ rabid fans, known as Trekkers and Trekkies. It also earned her accolades for breaking stereotypes that had limited Black women to acting roles as servants and included an interracial onscreen kiss with co-star William Shatner that was unheard of at the time.

Shatner tweeted Sunday: “I am so sorry to hear about the passing of Nichelle. She was a beautiful woman & played an admirable character that did so much for redefining social issues both here in the US & throughout the world.”

George Takei, who shared the bridge of the USS Enterprise with her as Sulu in the original “Star Trek” series, called her trailblazing and incomparable. “For today, my heart is heavy, my eyes shining like the stars you now rest among, my dearest friend," he tweeted.

Nichols' impact was felt far beyond her immediate co-stars, and many others in the “Star Trek” world also tweeted their condolences.

Celia Rose Gooding, who currently plays Uhura in “Star Trek: Strange New Worlds,” tweeted that Nichols “made room for so many of us. She was the reminder that not only can we reach the stars, but our influence is essential to their survival. Forget shaking the table, she built it.”

“Star Trek: Voyager” alum Kate Mulgrew tweeted, “Nichelle Nichols was The First. She was a trailblazer who navigated a very challenging trail with grit, grace, and a gorgeous fire we are not likely to see again.” 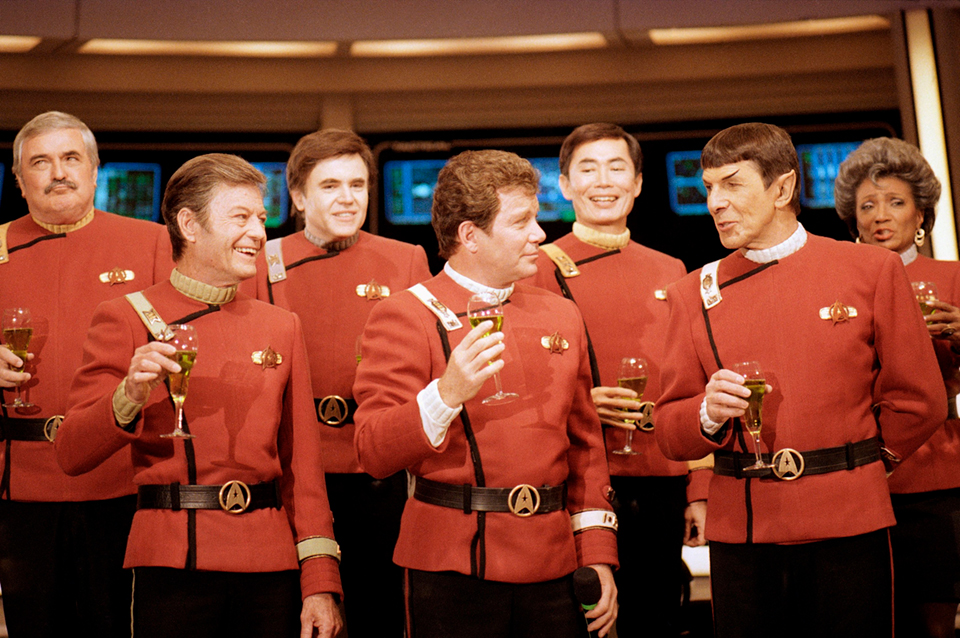 Like other original cast members, Nichols also appeared in six big-screen spinoffs starting in 1979 with “Star Trek: The Motion Picture” and frequented “Star Trek” fan conventions. She also served for many years as a NASA recruiter, helping bring minorities and women into the astronaut corps.

More recently, she had a recurring role on television’s “Heroes,” playing the great-aunt of a young boy with mystical powers.

The original “Star Trek” premiered on NBC on Sept. 8, 1966. Its multicultural, multiracial cast was creator Gene Roddenberry’s message to viewers that in the far-off future — the 23rd century — human diversity would be fully accepted.

“I think many people took it into their hearts ... that what was being said on TV at that time was a reason to celebrate,” Nichols said in 1992 when a “Star Trek” exhibit was on view at the Smithsonian Institution.

She often recalled how Martin Luther King Jr. was a fan of the show and praised her role. She met him at a civil rights gathering in 1967, at a time when she had decided not to return for the show’s second season.

“When I told him I was going to miss my co-stars and I was leaving the show, he became very serious and said, 'You cannot do that,’” she told The Tulsa (Okla.) World in a 2008 interview.

“That foresight Dr. King had was a lightning bolt in my life,” Nichols said.

During the show’s third season, Nichols’ character and Shatner’s Capt. James Kirk shared what was described as the first interracial kiss to be broadcast on a U.S. television series. In the episode, “Plato’s Stepchildren,” their characters, who always maintained a platonic relationship, were forced into the kiss by aliens who were controlling their actions.

The kiss “suggested that there was a future where these issues were not such a big deal,” Eric Deggans, a television critic for National Public Radio, told The Associated Press in 2018. “The characters themselves were not freaking out because a Black woman was kissing a white man ... In this utopian-like future, we solved this issue. We’re beyond it. That was a wonderful message to send.”

Worried about reaction from Southern television stations, showrunners wanted to film a second take of the scene where the kiss happened off-screen. But Nichols said in her book, “Beyond Uhura: Star Trek and Other Memories,” that she and Shatner deliberately flubbed lines to force the original take to be used.

Despite concerns, the episode aired without blowback. In fact, it got the most “fan mail that Paramount had ever gotten on ‘Star Trek’ for one episode,” Nichols said in a 2010 interview with the Archive of American Television.

Born Grace Dell Nichols in Robbins, Illinois, Nichols hated being called “Gracie,” which everyone insisted on, she said in the 2010 interview. When she was a teen her mother told her she had wanted to name her Michelle, but thought she ought to have alliterative initials like Marilyn Monroe, whom Nichols loved. Hence, “Nichelle.”

Nichols first worked professionally as a singer and dancer in Chicago at age 14, moving on to New York nightclubs and working for a time with the Duke Ellington and Lionel Hampton bands before coming to Hollywood for her film debut in 1959’s “Porgy and Bess,” the first of several small film and TV roles that led up to her “Star Trek” stardom.

Nichols was known as being unafraid to stand up to Shatner on the set when others complained that he was stealing scenes and camera time. They later learned she had a strong supporter in the show’s creator.

In her 1994 book, “Beyond Uhura,” she said she met Roddenberry when she guest starred on his show “The Lieutenant,” and the two had an affair a couple of years before “Star Trek” began. The two remained lifelong close friends.

Another fan of Nichols and the show was future astronaut Mae Jemison, who became the first Black woman in space when she flew aboard the shuttle Endeavour in 1992.

In an AP interview before her flight, Jemison said she watched Nichols on “Star Trek” all the time, adding she loved the show. Jemison eventually got to meet Nichols. 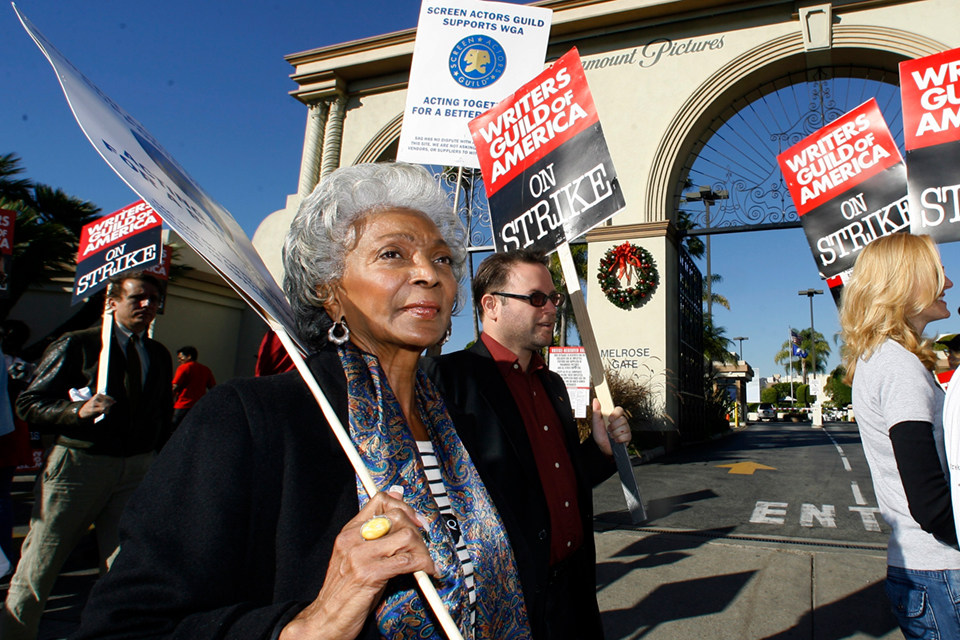 Nichols was a regular at “Star Trek” conventions and events into her 80s, but her schedule became limited starting in 2018 when her son announced that she was suffering from advanced dementia.

Nichols was placed under a court conservatorship in the control of her son Johnson, who said her mental decline made her unable to manage her affairs or make public appearances.

Some, including Nichols’ managers and her friend, film producer and actor Angelique Fawcett, objected to the conservatorship and sought more access to Nichols and to records of Johnson’s financial and other moves on her behalf. Her name was at times invoked at courthouse rallies that sought the freeing of Britney Spears from her own conservatorship.

But the court consistently sided with Johnson, and over the objections of Fawcett allowed him to move Nichols to New Mexico, where she lived with him in her final years.