The Drug War: Growing the Green for Corporate, State Interests 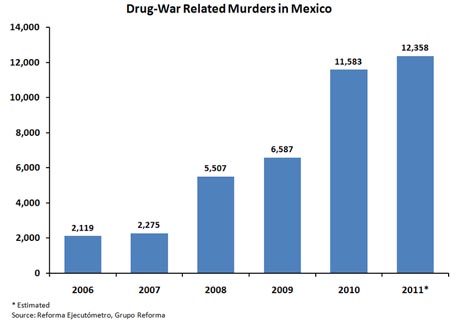 Per BBC News, "[p]rotests in more than 20 Mexican cities against drug-related violence have been interrupted by news of the discovery of 59 bodies." Since President Felipe Calderon called on the military to combat drug cartels in 2006, an estimated 35,000 Mexicans have been killed, "a sign" -- according to the Mexican and U.S. governments -- "of success in the fight against drugs." Though Mexicans live in constant panic, daily kidnappings, mass graves and shootouts in the streets are, in Drug War Newspeak, the best indicators of progress.

However one personally regards personal use of illegal drugs like cocaine or marijuana, the prosecution of the Drug War perhaps ideally illustrates statism's ruling class intrigues. The structural predicates for its continued existence are interwoven with some of the most powerful fixtures of the corporate economy, all milking it to line their pockets on the misery of ordinary people.

Just as violent crime mushroomed under alcohol prohibition, with Al Capone and his ilk proving an ideal counterpart for the organized crime of the state, so too has drug prohibition begotten international bloodbath. Even if we regard the rationales advanced by the Empire as genuine reasons for its Drug War, the results are strikingly disconnected from that purported reasoning. Ever increasing police spending, foreign intervention and domestic authoritarianism have been coupled not with any marked decrease in crime or the prevalence of drugs themselves, but in a murderous struggle, unremitting and constantly swelling to new proportions.

For the state, serving the ends of the political class, what it is that the war is against is far less important than the fact that there is a war, something out there that enjoins the consumption of huge piles of resources. Given both the levels of spending on the Drug War and its putative justifications, we could expect, even assuming the utmost waste and inefficiency, to see some measurable "progress" toward the state's goals.

And the truth is that the state's goals are being met through the Drug War, which -- like the War on Terror -- is devoid of any clear, defining lines or enemy. Those goals, though, don't match the intentions we're meant to glean from "Just Say No" ads and the D.A.R.E. cops roaming the halls of the state's K-12 education pens. In the same way that traditional warfare means bankable profits for defense-related contractors in the fabled "military-industrial complex," the Drug War is a reliable source of income for the ruling class.

Everyone has skin in the game, from Wall Street banks and huge prison companies like Corrections Corp. of America and Geo Group to drug companies like Pfizer, and the green they care about isn't marijuana. From top to bottom the Drug War is shaped perfectly for big government and for corporate interests, enabling the clandestine "security" apparatuses of the Empire to scout new outposts for neoliberal colonialism.

As Dan Russell argues in Drug War, "[T]he structural effect of the artificial value [of illegal drugs] has been to create, over the decades, an unbreakable symbiosis between drug-dealing and covert military intelligence. Each is the greatest strategic ally of the other." The network of important interests surrounding the Drug War is, for market anarchists, an expected and characteristic instance of the kinds of relationships the state creates.

Institutionalized coercion around drugs -- rather than the drugs in themselves -- creates the extreme violence and crime we see in place like Mexico today. Only by subjecting these commodities to the mutual rewards of free exchange, away from the reach of the state, will the real criminals of the Drug War be overcome.

C4SS News Analyst David D'Amato is a market anarchist lawyer currently completing an LL.M. in commercial law at Suffolk University Law School. His aversion to superstition and all permutations of political authority manifests itself at www.firsttruths.com.