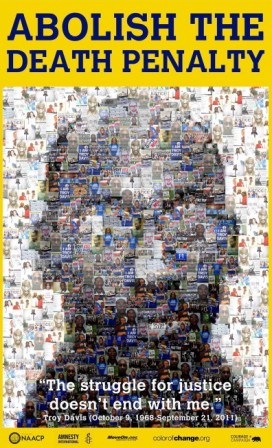 It was only a year ago this week we were embroiled in the "Too Much Doubt" campaign. We were fighting to save a man's life; bringing to light the overwhelming evidence of Troy Davis' innocence.

We lost Troy to an unjust criminal justice system. But we find solace in Troy's words: "They can take my body but not my spirit, because I have given my spirit to God…the struggle for justice doesn't end with me."

To commemorate this solemn week, we've created a poster for you to download and put up in your home, office, school, or place of worship. Please download it in memory of Troy, and in recognition of our continued struggle to end the death penalty in America: Click here for the poster.

Troy Davis didn't want our campaign against the death penalty to end with his execution. He knew there was too much at stake and—if we lost the battle for his life—we would have to move forward for him, our brother Troy.

We have stayed true to Troy's words. Together with Equal Justice USA, Amnesty International, MoveOn.org, Color of Change, the National Coalition to Abolish the Death Penalty, and Courage Campaign, we successfully organized to defeat the death penalty in Connecticut.

And this November, voters in California will vote on an initiative to replace the death penalty with life without the possibility for parole.

Several more states, including Maryland, have legislative battles, where we're looking at a fight next year.

We're making progress towards changing the flawed system that cost Troy his life and has effectively taken the lives of too many women and men who look like Troy, languishing on death row for crimes they did not commit. A majority of Americans are now against the death penalty, and within our lifetime, we will finally end this barbarous tradition.

But we need your help. Honor Troy and the movement he brought to light by downloading and displaying our poster today.