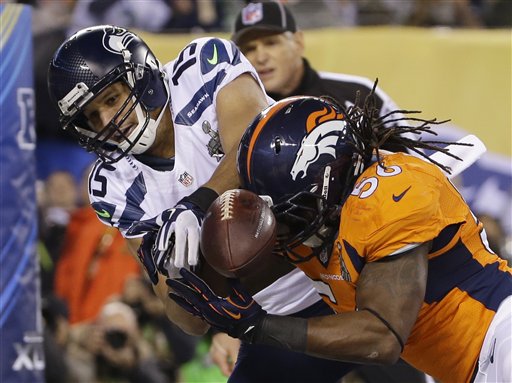 Prior to Sunday’s Super Bowl, I told anyone who would listen that I like both the Denver Broncos and the Seattle Seahawks, so I wouldn’t be terribly disappointed regardless of who won the game. But…I was hoping Seattle would emerge the victor and I will tell you why. First, because as a former high school and college quarterback, I am partial to teams with a Black starting QB. In Seattle’s case, their first and second team quarterbacks are African American. To understand the significance of this breakthrough, for years, Blacks were not allowed to play quarterback or middle linebacker at major universities or in the pros. Quarterback in particular was the glamour position and any African American coming up through the ranks as a quarterback was usually converted to a defensive back or a wide receiver, if they made it to the NFL. Regardless of how great a Black quarterback was at an HBCU, for example, he didn’t get a chance to showcase his quarterbacking skill at the pro level. It was as if the scouts thought Black teams played football with 10 men instead of 11. Even a, shall we say, passing look at history would have dispelled that notion. “Fritz” Pollard was professional football’s first Black quarterback in 1920, leading the Akron Pros to victory in the NFL’s first championship game. In the modern era, James Harris, the Grambling great, became the first regular starter for the Buffalo Bills in 1969. Nearly 20 years later, in 1988, another ex-Grambling QB, Doug Williams, became the first Black to start and win a Super Bowl. This season was hailed as the Year of the Black Quarterback in the NFL, with nine starting on the third weekend of the season. The second reason I was pulling for Seattle was their coach, Pete Carroll. I always enjoyed his brand of football when he was head coach of the University of Southern California. But my respect for him deepened when I learned he regularly made midnight trips to the ‘hood in an effort to curb gang violence. LA Times columnist Kurt Streeter would later write: “Few know that about twice a month Carroll leaves his comfy digs at USC, hops in the back of a beaten Camry driven by a former gang member and heads to South L.A. neighborhoods where the snap of gunfire and the anguish of death occur with the steady regularity of a metronome. “These are not recruiting visits. He’s trying to save lives. “Most often, he arrives near midnight and walks shadowy streets with that familiar, electric strut, surrounded by little boys, grandparents, crack heads and gang toughs. He empathizes, listens, encourages, laughs. He talks about jobs and kids and marriage, about perspective and courage, about how difficult it must be to be caught in the madness of the streets. “He realizes that some might think he’s a fool, that some might say he should pay no mind to gang members. Naysayers do not stop him.” My third reason for cheering for Seattle is that they’ve often been called misfits, with many so-called experts questioning their ability to play in the NFL. However, one-by-one, the players, many of whom were drafted in the low rounds, if at all, have proven their critics wrong. Case in point: Seahawks linebacker Malcolm Smith, the game’s Most Valuable Player, wasn’t picked until 242nd in the 2011 NFL draft. Yet on Sunday, he was the star among stars, making nine tackles, recovering a Demaryius Thomas fumble early in the third quarter, and with less than four minutes remaining in the game, intercepting a Peyton Manning pass and returning it 69 yards for a touchdown. And there was that quarterback who, at 5’11” would never make it in the NFL. At least, that’s what they told Russell Wilson. All he did Sunday was lead his team to a Super Bowl victory in his second year as a pro. When he was younger, he attended a football camp organized by Peyton Manning. But on Sunday, Wilson was playing as though he were the instructor and Manning was his pupil. Richard Sherman again proved he is NFL’s best cornerback. After Seattle’s division playoff game against San Francisco, he was depicted as a loudmouth defender lacking class. What the talking heads didn’t say was that he had extended a hand to Michael Crabtree, a gesture that was rejected, before he boasted that the 49’ers should have known better than trying to complete a pass on his side of the field. Anyone who has ever played organized football realizes that’s the mindset of defensive backs: Don’t even think about it. When Colin Kaepernick, another Black quarterback, tested him near the end of the division title game, Sherman may him pay. For a group of so-called misfits who routed the favored Denver Broncos 43-8, the Lombardi Trophy seems to fit them very well. George E. Curry, former editor-in-chief of Emerge magazine, is editor-in-chief of the National Newspaper Publishers Association News Service (NNPA.) He is a keynote speaker, moderator, and media coach. Curry can be reached through his Web site, www.georgecurry.com. You can also follow him at www.twitter.com/currygeorge and George E. Curry Fan Page on Facebook