NCAA's Anti-Celebration Rule is Unfair and Should be Dropped 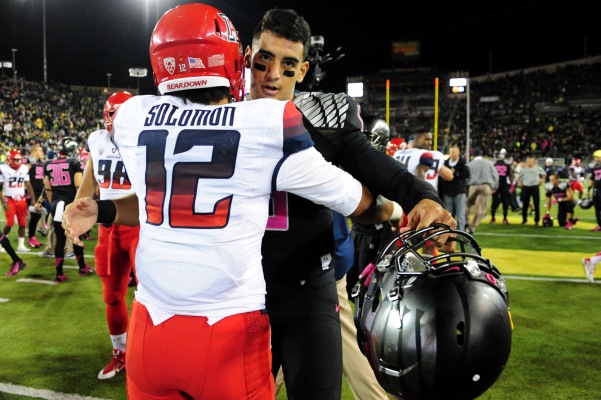 The NCAA and its defenders are always blabbing about the student-athlete, how much they care for these kids and only want to do right by them.

Well, here's an easy one.

Drop the rule against excessive celebration in college football, or at least give it some serious modification.

Don't wait until the end of the season, either.

Do it right now.

Before another team is unfairly penalized.

No. 2 Oregon was the latest squad to unfairly feel the wrath of what is nothing more than the NCAA's version of an old man yelling, "Hey, you crazy kids, get off my lawn!"

This is taking nothing away from Arizona's impressive performance in a shocking 31-24 upset of the Ducks on their home field Thursday night. But what happened with just over 4 minutes remaining was a downright travesty.

What did Tony Washington do that was so awful?

Well, after sacking Arizona's quarterback to put the Wildcats in a fourth-and-goal situation from the 17 — which should've have set up a 34-yard field goal attempt (not exactly a chip shot) — Washington came to a stop, put his hands together, and bowed toward the roaring crowd at Autzen Stadium.

For that horrific transgression in a tied, tense game, Washington was assessed an unsportsmanlike conduct penalty. The officials moved the ball half the distance to the goal line, with an automatic first down. Three plays later, the Wildcats scored the go-ahead touchdown.

This is not to imply Arizona would not have won the game anyway, but there's no excuse for such a benign act to potentially have such a huge impact on the national championship race.

Oregon was one of the leading contenders to make college football's new four-team playoff, but those chances might have gone up in smoke because a player had the nerve to get caught up in the excitement of making a huge play with a polite gesture toward his own fans.

This wasn't some elaborate, planned-in-advance celebration.

No, this was a 22-year-old expressing himself in a way that shouldn't have been offensive to anyone.

"That penalty is very open to interpretation," Oregon coach Mark Helfrich said in the most diplomatic way possible.

Well, this is no time for diplomacy.

The NCAA — and, to an extent, the NFL — seem intent on sucking all the joy out of this brutal game. Apparently, it's OK for these athletes to literally put their lives as risk on every snap, as long they don't show a lick of joy once the play is over.

This past Monday night, the pros found themselves embroiled in controversy after Kansas City Chiefs safety Husain Abdullah was flagged for falling to his knees in prayer after scoring a return touchdown against the New England Patriots.

The NFL said the officials made a mistake. The referee union countered that it was the right call under the rules, because Abdullah slid on his knees before bowing his head in a Muslim prayer at the back of the end zone.

There shouldn't be any dispute, because neither act — the slide nor the prayer — should be against the rules.

Of course, the college game is much tougher on anyone who shows the least bit of personality. The rule passed in the mid-1990s essentially bans any act that is viewed as drawing attention to yourself, such as removing your helmet.

It's been carried to such extremes that a Georgia Southern player was penalized for briefly tugging at his jersey, a la Superman, after scoring a touchdown against Georgia Tech a few weeks ago. And Georgia's star running back, Todd Gurley, was flagged for throwing the ball to the turf with a little too much force after a 51-yard touchdown run against Tennessee, a penalty that was enforced on the kickoff and gave the Vols a short field on the ensuing possession. They quickly turned it into a touchdown, though Georgia held on for a 35-32 victory.

Dooley, interestingly enough, was on the NCAA rules committee that came up with the anti-celebration rule about two decades ago. He still thinks it is desperately needed, especially at a time when just about everyone is craving their 15 minutes of fame on YouTube and social media.

Maybe the intent was good, but it's gone too far. Choreographed celebrations should be banned. Ditto for anything that drags on too long, after the official has dutifully warned the player that enough's enough.