The Math and the “After-Math” of the Confederate Flag 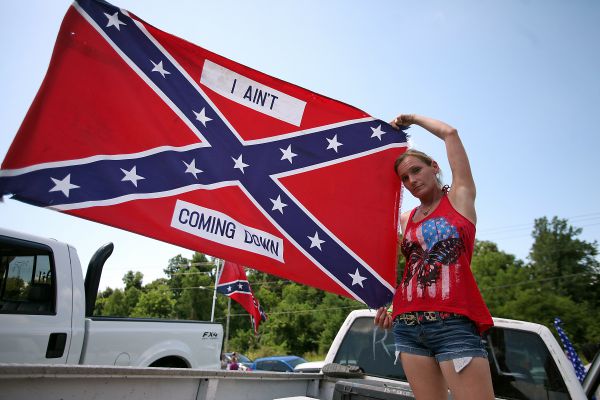 Now that the confederate flag has been taken down, complete with honor guard and pomp and circumstance, what are Black folks going to do now? Another question is, “What does the math of the aftermath look like?” Everything boils down to economics/business at some point, so let’s take a look at the past few weeks to see what has really taken place.

After all the bluster, the tears, the rallies, the sermons, the rhymes, and the confrontations between pro- and anti-flag folks, the sales of confederate flags show an exponential increase. Like never before, folks are driving around with two and sometimes more flags attached to and unfurled on their vehicles.

Stores that sell the flags experienced Christmas in July when it came to their sales revenues. The flag was in high demand, and still is. Thus, the math connected to the aftermath of the flag controversy has already resulted in profits for those who sell it, Walmart’s and Amazon’s decision to discontinue sales notwithstanding. Confederate flag hats, shirts, posters, underwear, etc. have suddenly experienced high demand as well. I am not mad at those folks for profiting from the flag. It’s simply part of the “After-Math” involved in protests and other collective strivings. I can hear the storeowners now saying, “Yee-Haaaah!” as they make their way to the bank.

Now let’s look at the “After-Math” for Black folks. First, the discussion of the flag literally overshadowed the fact that nine Black folks had been killed by Dylann Roof. If that flag had not been in the photos of him, it would not have even come up as an issue and would probably still be flying on the state capitol grounds. It became the focus of our attention rather than the victims of that heinous crime, as if the flag made this guy go to that church and shoot these people. Heck, if the flag had that much power, there would be a lot more us dead from its mesmerizing allure and gravitational pull on mass murderers of Black people.

Many Blacks are now left with a feeling of euphoric victory because the flag is down; they have called off a 15-year boycott of the state and the NCAA announced it has lifted its ban on holding championship events there. Uh oh, here comes the money. What will South Carolina Black vendors and contractors get from that?

On several occasions, I saw South Carolina State Senator Marlon Kimpson saying on CNN that the most important thing for Black people in his state is economic empowerment. He warned that folks should never lose sight of that, even in the aftermath of such a tragedy. Of course, he is right, but will Black folks have seats on the money train coming through the state because the flag is gone?

I had the privilege of speaking to a group of Black business owners in Columbia, S.C. on July 11, after which many of the attendees shared their feelings about the flag controversy. Their words were similar to Kimpson’s. They felt the flag was a distraction, a diversion to what is really important to Black people as we try to survive and thrive in the land of plenty. They know what time is it. I told them now’s the time to really test Gov.Haley’s compassion and empathy for Black people. I suggested they go to her and make demands for reciprocity for their tax dollars by opening up the channels for economic inclusion in government purchasing and development.

Now that the private sector has shown its willingness to capitulate to the pressure, go to them and demand they also capitulate to calls for equity in their construction, professional services, and supplier deals. In other words, Blacks in South Carolina should do the “After-Math” of the flag brouhaha and make sure their benefit is more than just a good feeling. And what about the University of South Carolina, which makes a tremendous amount of money from the participation by Black athletes in their various programs? How many Black companies have contracts with that school?

Black folks celebrated the unveiling of the MLK statue, but a Chinese man got the $10 million to sculpt it, and used stone not from Elberton, Ga., but from China. Each year thousands of people go to Selma and stand on the bridge, crying and making speeches; from their vantage point they can see 40 percent poverty in the town they celebrate. What is the economic “After-Math” of 50 years of that?

The beat goes on with superfluous issues such as flags and now maybe even the carved images on Stone Mountain, but in the aftermath of these kinds of symbolic victories, Black folks must also take a very close look at the “After-Math.”

Jim Clingman, founder of the Greater Cincinnati African American Chamber of Commerce, is the nation’s most prolific writer on economic empowerment for Black people. He can be reached through his website, blackonomics.com. He is the author of "Black Dollars Matter: Teach Your Dollars How to Make More Sense",which is availablethrough his website; professionalpublishinghouse.com and Amazon Kindle eBooks.